We've been fortunate enough to receive a number of big indie releases these last weeks, but the "even more indie" small devs aren't sitting on their hands, as evidenced by the games below. Behold, free awesomeness!

Jables's Adventure (Windows, 25MB, free) - It's adventure time! When Jables awakes one morning with a squid on his head, he knows something is different. That the squid has a name and is calling Jables "hero" is something else entirely. Venture outside in this platform adventure, walk to the right, high-five the guy standing there, and you win! Seriously! But, since the squid's already on your head, might as well do some more exploring to see if anything else is going on. Wander around the game's interconnected passageways searching for events like a bear with a flamethrower or a miner with a chainsaw. You get a few ability upgrades and there are several life-boosting fruits hiding as well. What the game lacks in depth or length it more than makes up for in presentation, as Jables's Adventure looks and sounds brilliant, and the dialogue/story is hilarious. Created by JaJitsu, author of Cat Poke.

L'Abbaye des Morts (Windows, 1.4Mb, free) - A tribute to classic ZX Spectrum games such as Manic Miner, L'Abbaye des Morts (The Abbey of the Dead) from Hydorah creator Localmito is light on everything but challenge. You play a priest who escapes into an abandoned church when the crusaders come marchin', and after finding a few pieces of parchment you begin to seek out the twelve crosses so you can escape to freedom. Each of the two dozen rooms has its own challenges to solve, most of which are reflex-related. It's a short game, but extremely enjoyable for an afternoon of old-school platforming. 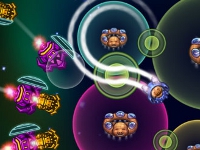 PlasmaPig (Windows, 9.5MB, free) - A work-in-progress defense game that only uses one button, PlasmaPig is an exercise in orbiting. The pig mother ships are under attack, but each has a forcefield to keep it safe. As the little protector ship, all you can do is follow the orbit of each field, switching at key points by tapping the [spacebar]. Crash into the attacking ships to take them out, and hold [spacebar] to pick up speed, heal forcefields, and add to your bonus multiplier. Later, new ships with shields and other tricks appear, giving this game more of a strategic slant than you might have realized!

Do NOT pester the Mermaid after she warns you.

High fives have never been so useful!

Oh man, I really like Jable's adventure. Though I had trouble with the

. I knew what to do, but it was hard to be precise with the buttons. Still, it's really fun and I like its style. I'd love to see the guy who made it make a much bigger game someday.

Yeah, Jables's Adventures has the best save system EVER.

I'm stuck on the part with mermaids and the wall. Help?

ignore the mermaid until you get the scuba gear. and the wall is as simple as shooting it.

Has anyone found all ten fruits in Jables's Adventure?

Some hints regarding the fruit:

You'll need to revisit quite a few places after you gained the jetpack.
A few things that appear invincible are in fact destroyable. As long it has a face, and the shots do not go through or bounce of them, they probably can be destroyed.
When he says x, he means right ON the x.(or perhaps its just patience? either way, it took a while for that one)

j for area select and k for triple shot

Any help with the final boss, king squid?

You have to stand on the mouth and then press x (I think) to slap it so it falls over. Then you can damage it by shooting the mouth

anyone unable to open the windows plasma pig exe file. It downloads to my desktop then immediately dissapears.

I found Finn and Jake in Jables adventure! You need a

to find them, I'm gonna give you a hint, instead of saying where they are, look carefully at the background of, well, everywhere. You might see a key component, and then find out the rest.

i am missing one fruit and dont want to look anymore
where is the last one?