Fooling around with the titles of this week's selection of games, I discovered something unusual. If you rearrange the letters, you can create the phrase "a decarbonised djinn met musing". Now, that may seem a bit random on the surface, but if you think about it (especially if you're a djinn who has had his carbon removed), you'll either go mad or realize it's kind of a funny thing. But, whatever... GAMES!

Remaddening (Windows, 8.7MB, free) - A perfectly-suited name for a game, Remaddening is a platformer that takes place around a constantly-changing circular playing field. Run from the red beam while hopping over inclines and working your way in one direction. As you move, the environment scrolls on and off your field of vision around the circle, leaving you mostly blind to what's next in the procedurally-generated world. Then, the red light suddenly appears, and you've got to book it! A simple change to a familiar concept sometimes produces great results, and this one is certainly an interesting one to experience! 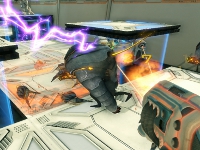 Sanctum (Windows, 402MB, free) - A single level demo of a work-in-progress game, Sanctum pulls the tower defense genre into first person shooter territory and doesn't lose a drop of strategy in the process. You play a soldier who must defend her home from hordes of hostile alien creatures. Move to the battle corridor and purchase various offensive and defensive turrets, traps and obstacles to deal with the enemies. When you're ready, unleash the aliens and stand ready to attack. Not only will your buildings attack your foes, but you'll use your upgradeable weapons to attack as well. The sci-fi world is drawn with careful detail, and the game is equal parts strategy and action. Keep an eye on this one for its full release!

Inside Job (Mac/Win, 18-23MB, free) - Freelance operative Ryuhei is ready for his first mission. But what should have been a simple smash and grab turns out to be wildly more complex, as someone is watching through the security cameras. Use your special ability to take control of people on each floor, moving them throughout the area to accomplish tasks or just getting them out of the way so you can make it to the exit. Very nice premise that catches you right away with its high level of mystery and intrigue, and as the story progresses, you begin to realize this game has a deeper meaning to convey...

I liked Inside job, I've always been a fan of stealth type games, it was just too short!! DX

Inside Job -- I really hate games that hijack your whole screen without warning. I like to multi-task and you don't even get to toggle out of full screen till the intro is done. That's just plain annoying. you should have a setting or config for that. seriously.

Also bug: I "touch powered" the first guard at the start of the game, and moved him all the way to the end where the elevator I think was? and pressed space again to let go of his mind control, and the screen scrolled outwards of the game limit and everything was pitch black. Had to quit and start over to the "Force you to watch the intro by hijacking your whole screen" part.

Hmm. I can't run inside job on my mac. I click on the "Inside Job.app" after extracting and nothing happens!

Anyone else having this problem?

I can't seem to switch weapons in Sanctum. I'm stuck with the Sniper Rifle which is too slow firing for the quick enemies.

Sanctum looks AMAZING, and the other games look fun too. This is the first weekend download in a while that I've actually wanted to download the games on a weekend download. Hopefully they are fun.

Inside Job dissapointed me, I was expecting to play what the review said I was going to play.
The actual gameplay was fun for 2 levels and then got boring and very samey,
*control guy*
*Move guy to wall*
*do your stuff*
*repeat*

The story was pretty average too and I'm confused about where it gets any more complex as the review suggests.

From start to finish it is just a straightforward smash and grab mission for Ryuhei, and if it isn't then there is no indication that it is.
And after the vault it got really boring -gameplay just gave up, which isn't a problem if there is something else to take its place, but there wasn't.

Overall, a really good concept excecuted poorly with a misleading review to boot.

I thought I'd actually have to use the guards for puzzles rather than just turn them the other way.

@Billy Nitro: Mouse wheel is a no go, so try pressing 2 to switch to your assualt rifle.

Sanctum: Amazing game, I will SOO buy the full version.
Does anyone have any tips on how to kill any of the harder enemys? They are immune EVERYWHERE except for the back of their heads or eye stalks, and the gatling turrets just shoot at their feet. I feel like the game needs a specific "Critical Tower" which is a tall tower, that automatically aims for their weak spot. Though it fires a bit slower than a sniper, and is a tad weaker. This makes it more "Tower Defense" and less "OH MY GOD, I HAVE TO KILL EVERYONE OF THESE THINGS MYSELF?!?!?"

@Turnip - I saw that in the instructions but it wasn't working no matter what combination I pressed them in.

In my experimentation though, I did find a command prompt opened when I hit the tilde (~) key (hitting 't' came up with a similar prompt with the command 'say' automatically filled in). I found an 'allweapon' command that gave me access to another gun I could switch to using '1'. It fired energy balls and the secondary function was a constant stream of energy that did continuous damage. Not sure if that was supposed to be the assault rifle, but it did have a rapid fire function.

That was the only other weapon I got.

I came across the same bug as JIGuest in Level 2. Screen went black and I had to quit the game after I took control of a guard.

Also, there's some language in the intro you might want to put up a warning about. It doesn't bother me personally, but I know there are people who like to be alerted about not entirely kidsafe games.

A sort-of-tip about Inside Job: you can hit the Enter key to skip the intro and go straight to Level 1. Saves a lot of time.

Same bug as others with Inside Job. First time on level 2, second time on level 3. I press space to switch back to my character and the camera just scrolls up and to the left. Really not worth playing through the whole thing again.

Would anybody be able to help me? I absolutely love the idea of sanctum, but whenever I download the installer, it says that "The UDK package is corrupt, please redownload (Exception when opening zip)."

I realise that the end file isn't 402MB which is what the mozilla download window says it should be, and what the website says.

It might be mozilla, but it never downloads the full file (tried twice)...any suggestions will be appreciated but for now I'm off to check google!