Hey, you, weekend gamer. You want I should share games with you? You want they should be uh, fun? Good. Because I have games that are fun. RPG fun. Puzzle fun. Lasers fun. Lantern fun. What? You think lanterns are no fun? You think "flashlight.app" is more fun? Hmm. You need to play with lanterns more often, I think...

Dungeon Crawl Stone Soup (Mac/Win/Linux, >8MB, free) - Dungeon crawling for the masses! Stone Soup puts a friendly face on one of the most daunting genres for non-fans: the dungeon crawler RPG. For starters, a graphical (a.k.a. non-ASCII) interface is readily available, and instead of keyboard commands, you can use the mouse to interact with the game. Even though it's newbie friendly, Stone Soup is filled with all the nuances any respectable dungeon crawler would have, such as an avalanche of items, plenty of floors to explore, and character customization possibilities that border on the endless. You can even play online and compare your stats to the rest of the community as well as participate in tournaments! 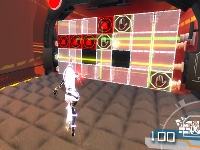 Sp.A.I. (Windows, 214MB, free) - It's a well-established fact that in the future, computers will rule the high-tech world, and the coolest people will wear black leather outfits and hack said computer systems to fight against "the man". Sp.A.I. is a third person puzzle platform game that takes place in the near future where that kind of thing has happened. You play as Aiva, a hacking program trying to break through the information superhighway to shut down the enemy's mainframe. Float along the gorgeously futuristic corridors and solve puzzles involving lasers and blocks to make it through each firewall. You'll also need to decrypt certain files in order to proceed, a task that requires dexterity as well as cerebral processing. Each puzzle is blended into the next seamlessly, creating a world that's equal parts platforming and equal parts puzzle solving. Created by a group of five students at the Queensland University of Technology, who win my personal award for "Bestest Futuristic Computer World Art Design".

Dear Agent (Windows, 1.79MB, free) - A new release from Cactus, creator of a bunch of cool indie games, Dear Agent is a short, minimalist platformer where you play an agent trying to destroy terrorists and their equipment. Your laser can cut through any block on the screen, but because it's limited, you can't go blasting everything in sight. Instead, use it and your bombs strategically to unleash the pools of lava onto unsuspecting foes. Much more creative than just shooting everyone, and way more entertaining and challenging. 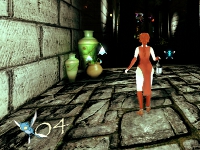 Eternal Dusk (Windows, 206MB, demo) - A curious, somewhat experimental design that puts you in the role of Ashlynn, a girl who controls the reality of the world around her with a lantern. Anything that isn't illuminated becomes filled with darkness and, thus, doesn't exist as a solid object. Her evil brother is darkening lamp posts around the world and scattering the fireflies about to keep dreamers from having good dreams. Rescue the fireflies and restore light to save the Dream World. A nice concept for a game, and well-implemented in the 3D environment. Some of the physics and controls feel a bit too unnatural, creating impreciseness in the gameplay. It shows some promise, though!

For anyone interested in Dungeon Crawl, a few tips:

- "o" is the autoexplore button, it will automatically move you until something of interest shows up

- The Crawl Wiki has a lot of good info, learn to love it

Hope all this helps, have fun!

The credits for Dear Agent features completely gratuitous and rather explicit scenes drawn in the game blocks. It was an unfortunate end to an interesting game.

DCSS is going to waste a lot of my time in the near future. This game is so huge. Nice find, JiG!

One of the things I like about Crawl (a bit more towards the original more than Stone Soup) is that there isn't really all those "hidden tricks" which appear in Nethack (dip a longsword in a fountain) or ADOM. Yes, you still need to learn the tricks of the monsters and which are dangerous or need special attention too (jellies will eat your weapons and damage your hands), but that's part of the challenge and something you can and will discover rather than something you'll need to read a guide to find out. Note that this game is VERY old and there are plenty of guides out there if you do want some spoilers (esp with things like gods which may be a bit hard to find out).

Some things to note for starters: each race has affinities towards certain skills which they will train faster or slower than normal. You can turn "off" skills to train in the skills menu which will make them rise much more slowly. This is important especially later on when you have an idea of what you're going to be/need, as all skills share a common exp pool. Corpses serve as an important food supply, though some are poisonous and many humanoid corpses are "contaminated" as are rotten ones. There are some items/races that will allow you to eat those too without penalty. Using a weapon/armor a lot will allow you to learn of its statistics rather than needing to use a identify scroll. This takes a while though.

Also one complaint I had for the tileset, is that demons are numbered 1-9, which give a estimate of their power, but of course this disappears with the sprites. Oh well, you'll die and learn I suppose.

Sp.A.I. didn't install for me. The "Unreal Development Kit" splash screen showed up, but nothing happened after that, and I had to kill the process to get it to go away.

The same thing happened with Magnesian (last Weekend Download), also a UDK game, so I'm guessing all games on that engine aren't installing. Any ideas?

This was on Windows 7 on a high-end laptop.

DCSS is and has been my favorite game of all time for years. It never gets old, and there's so many possibilities, and the latest update just made it so much better!

Granted, the credits in Dear Agent aren't in the best taste but I can't figure out how the poster above considers the image depicted in the credits "gratuitous and rather explicit" but describes the mass killing depicted in the game itself "interesting."

@debaser
It truly is interesting to destroy pixelated men on a computer monitor thoughtlessly, but the "gratuitous and rather explicit" credits haunts observations of thought rather than mindless actions. That is to say, when we pay attention, we are more likely to not want the thoughts that cross our minds.

Sp.A.I. was pretty cool, but the platforming seemed far too difficult. It wasn't the platforming itself so much as the double jumping, which, for me, was unresponsive at best. It seemed that if I jumped again before apex, she didn't have the distance to make some of the more difficult jumps. Worse, if I hit it after the apex, she didn't double jump at all. The problem seemed exacerbated on vertically moving platforms where it would respond maybe once in 15 attempts. Difficult, but in the wrong way.

Wow, did you seriously just lump in Stone Soup, one of the deepest, most complex and interesting games that exist bar none, into a **weekend download**??

That's a big shame. That game has more meat to it than 90% of the games you give full reviews to (i.e. random hidden-object games :/ ).

Sorry, I'm normally all for JIG but this was a regrettable choice in particular.