A definite "physics" theme for this edition of Weekend Download, featuring two games that bank their entire existence on force, momentum, gravity, friction, and all that sciencey stuff. Do they have what it takes to impress you, master of real world physics? Find out below! 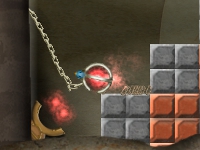 Bennu (Windows, 88MB, free) - How about a little physics puzzle action to run on for your weekend? Bennu puts you in control of a little bird with one ability: shooting chains and swinging from them. You can grapple onto any surface and move left and right in mid-air, affording you a surprisingly non-realistic level of control. Touch certain objects to change your color, and depending on the color you are, you'll cause the blocks you touch to disappear. Clear each level of all the blocks to move on. The game has a nice and calm atmosphere with a great soundtrack and some funny dialogue. The physics aren't so realistic, but the more arcade kind of feel suits the game just fine.

Wroom (Windows, 11MB, free) - Nice and crazy are two words that describe Wroom very well. This physics-driven racing game features most of what you would expect from a title of its ilk: multiplayer, best times, ghost races, etc. It also features some really bouncy physics that encourage you to play it fast, make mistakes, and try to recover on-the-fly. While driving, tilt your car back and forth to make smooth landings on the terrain, and jump to reach other areas or get yourself out of a jam. It's simple, but it produces that kind of laugh out loud fun you can't resist in a physics game!

Balloon Diaspora (Mac/Win, 57MB, free) - A dark 3D point-and-click adventure game? Yes, please! You start off stranded on a shadowy world with little more to look at than the balloon in the background. A stranger offers to fix your ride, and soon you learn you'll need to gather pieces of cloth to patch up the balloon. Lots of conversations to have in this quiet sort of game, along with a few fetch quests and a puzzle or two. A short experience, but very well-done with an atmosphere that's tough to beat.

That balloon game is wonderful. Shame it's so brief.

The Balloon game certainly has its atmosphere, no denying that. But I didn't really like the fact that it's about 95% reading and 5% action - which is either moving on or initiate talking to someone. This is basically an interactive fiction game. Don't get me wrong, I have nothing against reading f course - just not in a game like this. About half an hour into the game I caught myself drifting off and having to redo the conversations because I didn't really read them just rushed through them - I got bored, to be honest. Some of the decisions I have to make don't seem particularly wise either - I mean

the guy at the Archives says he needs the reports from the three field workers, for example, and wehn I meet them I cannot ask them, although they seem nice and helpful blokes - still, i have no conversation option that mentions I need their reports...

Sorry, I know it must have taken a lot of time to write and then make the game - but I just couldn't get to like it. If I want to read a lot, I have books that I'm interested in much more.

(Just to be clear: I'm not saying it's not a good game - I'm quite sure it's gonna be a popular one here.)

Anyone could beat the "mine" level in Vroom? The one where you have to reach the goal through mine shafts. The other levels took about a minute to complete, I gave this level up after about 20 minutes :(

bioLarzen, reports aren't always written, when you talk to them it always a converstion branch with R (archive man) to talk about there reports.

The game is great (Unity?), at least it was fun to play with for the weekend, thanks Cardboard Computer!

Thanks guest for the info!
Unfortunately, I already uninstalled the game.

@bioLarzen: I know how you feel - I loved the atmosphere of Balloon Diaspora, but way too much of the game was just going back and forth. Plus, the vast majority of the decisions seem to have no real effect (except maybe the last one) except maybe a single different line of flavor text.

Oh, and I, too, was confused about the lack of dialog options actually mentioning the guy from the archives - you're just supposed to talk to the people studying things and assume you "have their reports", which apparently are just verbal reports of what they found (as JIGuest mentioned).

While I kind of liked the (short) game that was Balloon Diaspora, I definitely found it lacking in some areas.