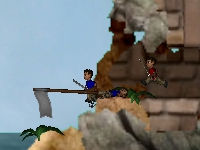 OpenClonk (Windows/Linux, 26MB, free) - A successor to the original shareware series Clonk, this creative sidescrolling action/mining/simulation series includes a ton of tools, multiplayer support, and very open-ended gameplay. Travel through user-made levels as you gather items you can use to reshape the land around. Grappling hooks, bombs, shovels, loam bridges — the list of items goes on and on. The ability to hang and climb on just about every surface adds to the open-ended fun, too! Naturally, multiplayer combat is part of the experience, and depending on the people you play with, your mileage will probably vary. A great open source project that's a lot of unbridled fun!

Pilot Crash Course (Windows, 5.24MB, free) - A small, arcade sort of game that would feel right at home on a mobile platform, this rough, experimental title is all about one thing: not crashing. Bounce on the critters below to keep your ship in the air. Hit different creatures to go higher, then bounce off of birds to gain some extra air. You don't always have complete control over your movements, which is somewhat frustrating, but the look and feel of the game is a tad whimsical, and it's fun for an afternoon break when you just want to see some awesome pixel art.

Intense Staring Simulator (Windows, 2.4MB, free) - As a sociopathic misanthropic school student, you really hate people. No, seriously, hate them. So, to make them go away, you stare at them. Or, rather, parts of them. Hover the cursor over each person to see which areas you can take a closer look at. Get three right and you make them go away. Get three wrong and everybody loves you and you lose the game. Interesting, yes? Simple visuals betray the game's slightly more complex sociological concept, but it's still all about that awkward feeling you get when you stare at someone's glasses for five minutes straight.

For some reason, Clonk doesn't work for me. :/ I just get a grey screen.

I get the same as Arkher.... Just a black screen. On the website, theres tons of info about making your own lvls and debugging, but no info on how to start/play the game....

I get the same as Arkher and Ruka. I have a feeling that it has something to do with my graphics card...
Also, I posted about this issue on their bugtracker.

OpenClonk users: Are you getting the right version? Both 32- and 64-bit versions are available for Windows. Make sure you grab the right one. I didn't have any issues with the 64-bit download.

John, the site says "If you are unsure whether you have a 64-bit system, download the 32-bit version. It also runs on 64-bit systems." And that's the one I downloaded, so yeah...

Fair bit of trouble getting OpenClonk to run properly...I can do the tutorials, but anything multiplayer makes my clonk become completely unresponsive, even though other players' clonks are responding. I can even chat too. It's really bothersome.

If you're experiencing bugs whilst trying to play the game, feel free to submit a bug report in our bugtracker: http://bugs.openclonk.org/

Try to provide as much information about the bug as you can, and any other details that could be relevant to the error (ie: video card, OS, etc.)

We'll provide feedback and hopefully be able to resolve the problem shortly! :]