Just because a game isn't technically finished doesn't mean you can't play it. Or that it isn't fun! This edition of Weekend Download features two games that are still works in progress. They may have some rough edges, dusty corners, and missing bits and pieces here and there, but you can still experience the core of what is shaping up to be a great game. And just think: when the games are officially released, you'll feel all cool and stuff because you already knew about it!

Vexed Hedgehogs (Windows, 9.7MB, free) - An entry in the March/April Experimental Gameplay Project with the theme "cheap clones", Vexed Hedgehogs does exactly that, shamelessly cloning just about every popular casual gaming genre from Angry Birds to Peggle. Fling hedgehogs with the slingshot to take out the EVIL cloners who steal unique indie game ideas and market them as their own. Get points for destroying objects, and— wait, let's face it. You're not in it for the gameplay, you're in it for the laughs. More parody than a Mel Brooks film collection, Vexed Hedgehogs will give you a laugh or two along with its surprisingly fun gameplay. 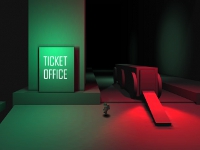 The Adventures of Box Guy (Mac/Win, 8MB, free) - A work-in-progress demo for a spiffy little platform game, Box Guy puts you in control of a guy who looks sort of boxy running around a world made out of boxes. Didn't expect that, did you? At its heart, this is an adventure platform game that takes place in a 2D world, though you'll note the visuals are rather 3D-ish in nature, and with some fine lighting effects to boot! Use [WAD] to move and jump, keeping in mind you can wall jump and mess with a few bits of scenery along the way. This is a demo of the game that's still being worked on, but the current release is very playable, lots of fun, and includes a level editor! (Note: The absolute latest build of Box Guy can be played in your browser, but it often isn't as stable or smooth as downloading the game.)

Nikki and the Robots (Mac/Win/Linux, 13MB, free) - An early public alpha release, Nikki and the Robots is still an incomplete game (no sound, few levels, story mode and many features not yet implemented), but it's shaping up to be an exciting single player co-op puzzle platform game. As Nikki, run and wall jump around the level collecting batteries and stepping on switches. When you see a terminal you can switch to control the robots. Robots can fly with jetpacks and hit some switches Nikki can't, allowing them to work together to press all the switches to complete each level. There are only a dozen or so stages at the moment, but there's some serious promise here for a very good game. Plus, there's a level design contest using the included editor going on, so you could get your creation upgraded and integrated into the main game when it's released. How cool is that? Answer: very!

I love Nikki! It's always a pleasure to play a well crafted platformer, with perfect and fluid controls seamlessly blended with a physics engine. Looking forward to see this one done :)

I gave the Box Guy browser version a try and it ran pretty well. So far there isn't much to tell, though.

The early levels of Vexed Hedgehogs were fun and had lots of surprises, but as I progressed, the levels became repetitive, boring and frustratingly difficult. Its fundamentally-flawed aiming system , which is the same as Angry birds, combined with the buggy physics (the hedgehogs often bounce BACKWARDS on flat surfaces) made it worse.

Box guy is pretty good, but how will we find out when the updates come out?

To my knowledge, I have the latest version of everything on my PC. Why won't it still run?