Ready for some serious content? This week we spill the beans on two games — one brand new, the other, well, not so new. One is serious, the other... not so much. One has a pretty horsey, the other, a bench. One is in color, the other— well, you get the picture.

The Graveyard (Windows/Mac, 24.5MB, free/donationware) - The Graveyard is an interactive short from Tale of Tales, the Belgian artists behind The Path and The Endless Forest. The game has you controlling an old lady as she tours a graveyard, hobbling slowly amidst chirping birds and greyscale scenery while a dog barks in the distance.

The game is an exercise in mood and theme with a minimum of interactivity. The woman can't explore the graveyard, and if she veers off the main path the camera waits silently for you to take her back around, almost impatient in it's insistence. The tank-like control scheme, so bemoaned by fans of games like Resident Evil, makes perfect sense for controlling an enfeebled person wondering at the end of her life. Down the central path lies a bench. The woman can sit down on the bench. And... that's it!

For most intents and purposes, The Graveyard is an interesting exploration of pure aesthetic — but, if you're willing to pay $5 to unlock the "full game", you'll be able to have the woman die while pondering her life in The Graveyard. Sounds like a novel upsell to me. 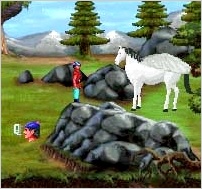 King's Quest II remake (Windows, 43.4MB, freeware) - For many, King's Quest II: Romancing the Throne was before their time, or simply missed, but the heroic folks at AGD remade it with new graphics and a voice-over. This is a similar treatment given by another group of good people to King's Quest III, which is certainly the more literary and emotionally compelling game. The difference here is AGD didn't just give the game a new coat of paint, they completely re-vamped the structure, puzzles and storytelling into a vibrant homage of a classic, and even modified the map to be logically contiguous.

The subtitle of this remake is "Romancing the Stones", a play off the original, appropriate since each of the game's major quests, which end with the acquisition of a magic gem, have been romanced into enhanced versions of themselves. Added map areas, wholly new puzzles, a chase mini-game with Sharkmen in pursuit, werewolves, a Vampire who is more than one might imagine, a cranky librarian you can harass for tips; it feels like a whole new game.

The overall story has also been modified to fit into the greater saga of the series, pulling story bits for later games into a vision scene, and lacing together the game's villain with villains from other installments, painting a mysterious conspiracy of evil mages in the lining. And to top it all off, they've re-done the intro and the ending, beginning with King Graham's longing for a bride, and ending with a celebration that includes every character in the game. This was truly a labor of love.

What a dissapointment.... that's all there is for this weekendownload....

I love these KQ remakes. <3 <3 <3 I had a special boot disk to allow me to play the old KQII we had, but even that no longer works on my newer machine. Yay for remakes!

Incidentally, The Graveyard is probably the best setup for a survival horror game I've ever seen. such simple instructions, such a simple arrangement, even a simple complication like "return to the gate" complicating itself with a maze or shifting pattern from when you entered would be darn creepy.

I just finished the king's quest remake. It was very different from the original, at least as far as I remember it, though it's been several years since I played the original. It does make you think about how similar it has to be to count as a remake, though.

If you're playing through the King's Quest II remake:

be sure to reload the cave entrance until you get the Easter egg. Not only is it hilarious-the ending sequence will leave you puzzled if you don't.

I recommend that everyone skips off to grab http://www.giveawayoftheday.com/fatal-hearts/ for free within the next... 15 hours.

I have the original Kings Quest 2, and can't wait to play this one! =)

I agree with Karpad. I was disappointed in The Graveyard in general. I understand the whole art thing, but I think the "game" suffered from a balancing issue. It's not like "Passage" which actually had a good mix of interactivity, artistry, and everything else to get the audience to think, and keep them engaged.

With Graveyard, the interactivity could have been forgiven if it was paced a little faster, or if there was more to digest, but after watching what is a beautifully detailed graveyard very slowly drift by over the course of five or ten minutes with nothing much else going on, you kind of get desensitized to whatever it is the creator was trying to convey.

I did like the song in the middle of it, but again, it was too minimalist of an approach. Anything more might have enriched the sequence. Being able to control different portions of the old woman while she sat on the bench so you could kind of "direct" the sequence, for instance, or, if interactivity is truly the enemy here, you could have a slow montage. Nothing over the top, though, I think that would ruin it. But maybe just different angles of the graveyard alone would have been the touch needed to make this a much more fulfilling experience.

But, as it stands, I think this is an instance where giving some interactivity at all actually made the experience worse. If you had taken the Graveyard, and made it an uninteractive live action sequence, that would have been I think more powerful than giving the audience control, but then not being able to do anything significant with that control.

While other games do exactly that and actually pull it off, Graveyard fails for reasons I still haven't fully grasped yet. What I know personally is that in general, I'm open to art games, but here, I think the interactivity promises too much and delivers far from enough.

With all of this said, I wanted to go back to agreeing with karpad, this would be a beautiful set up for a survival horror game. The detailing of the graveyard itself is absolutely gorgeous, and the choice to go black and white immediately brought back rememberances of Night of the Living Dead. You could even keep the old lady as the main character, after all, Silent Hill really laid the groundwork for the non-paragon video game hero in survival horror.

Too bad, that game will never come to pass. I would pay money for a convert of this game into survival horror.

Forget what I said before.

The voices and music kept getting tripped up, and the entire bottom half of the screen was black.

If anybody else has had this problem, please tell me what to do!

Do I have to download the King's Quest 2 file, then the Music Pack and then the Speech Pack to play the game with all of its features or the Music and Speech Packs are unnecessary?

it's the first time I've played king's quest two or a remake of it, and i'm really enjoying it, definitely the best download game i've played.
but i'm stuck:

i'm at the bit where i've taken the trident from the sharkees and i'm being chased. i've just got out through the hidden wall and i tried to use the trident of the guards when they come out, but it doesn't work. so..?

No, you don't need the music and speech packs to run KQII. (Unless you want to hear the better music or the voice acting.)

Did you listen to the sharkee king earlier? The trident changes things into different forms. Is there anything you could change the form of other than the guards?

No, not the little fish.

Before the guards exit, use the trident on the hidden passage to turn it back into solid stone. This will trap them inside.

i've just digged up the tiara, but every time i try to get back i get killed by a wolf. trouble is that i haven't actually got the wolfbane. anyone know what i can do?

I got a new computer and went to download it again, but it's been moved? :(