Driving, driving everywhere, but not a brake to squeek. Er... never mind about that lousy rhyme, its driving time! So hop in, close the door, and press that pedal to the floor. And you can also play the other non-driving games. You know, if you want to. 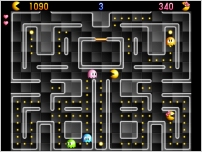 Pac the Man (Mac, 3.4MB free) - About as high a quality re-make as you could hope for of a classic arcade title, Pac The Man is a stylish, download-able smorgasborg of non-descript, yellow dots. Crisp graphics couple with on-beat sound effects and so much polish you can literally see the shine. Best of all, it's Mac-only, at last our revenge is at hand! 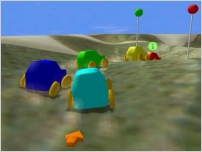 Napkin Race (Windows, 10MB, free) - On a tiny, scrunched up surface, tiny bug-wheeled vechicles bounce around with abundant glee. Featuring various modes, such as tag, capture the flag and a track race, this physics-liberal game will have you bouncing around with a gigantic grin as the tiny racers crash, bounce and some how stay upright throughout it all. 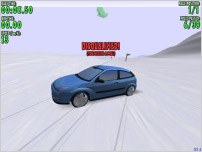 Downhill PAKOON! 2.Many Unlimited 2009 (Windows, 26MB, free) - Racing is always fun, but more so when speed is involved. Even more so when jumps are involved. So coming up with an entirely downhill racing game seems like a great idea - and it is! With maps from arond the world and cars of various qualities, race, slalom or "air time" your way down these slippery slopes as fast as possible.

Orbit Racers (developer's page) (Windows, 2.6MB, free) - Racing around a track which is entirely circular may sound repetitive, but Orbit Racers pulls it off magnificently. With each track containing a center of gravity, the goal is to use only one button - the space bar - to steer the ship around the track. During the various courses, pickups, bonuses and ways to destroy your enemies are abundant and will become increasingly useful.

Still hungry for Mac titles? Three previously mentioned casual games have all spawned Mac versions in the last few weeks. Spandex Force, the superohero parody with puzzle/RPG gameplay similar to Puzzle Quest, is now available on both PC and Mac operating systems, while the unique match-3 game Rainbow Web 2 has also made the cross-platform leap. Dream Chronicles 2: The Eternal Maze is available for Mac as well, and its Azada-meets-Myst-meets-casual adventure gameplay is not to be missed.

Great games however i slight little error there.. Napkin Race doesnt have capture the flag lol

all it has is raceing and tag

Let me thank you for posting this earlier than last week.

Napkin Race won't start here (XP). I get some debugging error message when i try to run the game :(

Downhill is a nice one. Had some fun with it.

Im getting the same debug error message on Napkin Race, and Im using Vista32. Anyone have any suggestions? This game looks fun.

It says on the website that you need an OpenGL-compatible graphics adaptor, maybe that's why you're getting the debugs.

I'm confused by Pac the Man. Yes, it has a maze, and pellets, and ghosts, but it doesn't feel anything like Pac-Man, and it doesn't seem like it's any fun at all. What really made Pac-Man entertaining for me (or Ms. Pac-Man, at least) was feeling like I was outsmarting the ghosts. Each one had its own speed and its own personality. Here, they all just move at the same speed as Pac-Man, and they sort of randomly follow you or don't follow you. They don't seem to care. I don't really get the point of making a generic maze game and then putting Pac-Man graphics on it. I'm actually kind of offended.

ThemePark,
I have an OpenGL-compatible graphics card (the vaaaaaaaast majority of the cards nowadays are) so it's probably not the source of the error.

But thanx for the idea.

I am really confused by this sentence.

Let me thank you for posting this earlier than last week.

In fact, it was due to a comment from Groogokk that we decided to post both the Link Dump Friday and Weekend Download features earlier than we usually do.

Yeah, I have an OpenGL compatible card. I can play Bioshock for crap's sake, I think Napkin Racers shouldn't be a problem. ;)

Anyone discovered a fix to the Debug error? I've tried running it under earlier Windows compatibility, even tried forcing resolution with third-party program... no dice.

I'm using ATI drivers and I have all my OpenGL settings as they should be.

Any advice? Anyone find a solution?

Could someone please post a screenshot of that debug error? That would help a lot.

For information on how your program can cause an assertion
failure, see the Visual C++ documentation on asserts.