Today I would like to use this space to address a horrible error made just one week ago: I neglected to mention the previous Weekend Download was number 50! That means we've placed over 250 downloadable games before your eyes, which is... well, plenty of excuses not to do your homework or fill out your TPS reports. 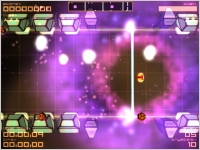 Alien Abduction (Mac/Windows, 4MB, free) - A tribute to the classic arcade shooter Defender, featuring just about everything that made the original such a hit. Alien Abduction is more of a mission-based shmup where you clear enemies in each level in order to progress. There's a surprising amount of tactical depth to the game, as well. Three game modes, two player action, and some neat power-ups make it worth the download.

Hammerfall v.0.21 (Windows, 10MB, free) - In this very early demo of the as-yet unfinished game, you control a rather strange aircraft that has a heavy rock chained to it. By swinging the mouse, build up circular momentum and whack the ever-loving steel out of your opponent. The physics take some time to get used to, but this game shows an enormous amount of promise.

Det Officiella EDGE Dataspelet (Windows, 16.6 MB, free) - Another minigame released by Knytt creator Nifflas, this one crafted for the EDGE festivalen. Armed with a laptop, printer, and digital camera, this game was created in a single day using art drawn by festival visitors. It's a simple arcade-style game of physics where you blast the "ball" around each stage collecting gems. You have multiple paths to tread, though, so there's actually a bit of exploration to it. 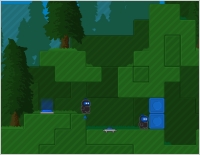 Visit 2: Dark Tower (Windows, 10MB, free) - A puzzle platformer that utilizes multi-character block/button puzzles. The description may sound bland and generic, but Visit 2 pulls together some surprisingly interesting stages that keep you clamoring for more. It's a surprisingly difficult game once you get a few levels under your belt.

I'm on a mac, so I can't play any except the first, but I'm downloading it now and it looks pretty fun.

What intrigues me most, though, is Visitor 2, for the knytt-like graphics and simplistic-seeming style.

Visit 2, yet another game with the apperence of a game from niffalas.
Go figure XD

Visit 2 is really fun. I'm up to the lava area and I have no idea how I'm supposed to solve the first puzzle there. Any help would be deeply appreciated.

If this is a sequel, where can I find the first one?

do the "secret" bursts of color do anything besides unlock Adventure mode?

Words can't describe how much I love The Official EDGE Game. I'm smiling so hard, my face might crack.

Having some trouble downloading visit 2. Maybe my computer is wacky, but it keeps freezing and then I have to try to close it and it won't, which means I have to reboot. Any ideas on what's wrong?

It's nice to have so many mac users here. Without JIG, I probably wouldn't be able to find good games to play on my macs. By the way, I'm downloading the Space Shooter now. :D

Played Hammerfall ages ago. Quite fun!

Visit II is corrupted, apparently. Anyone know why? (I downloaded it twice to make sure).

Nevermind. I got it.

Hammerfall seems like it could be a really great game, but it's too frikkin dark! In the level III-i I was mostly blindly circling my mouse because I couldn't see almost anything. Oh, and that's another thing - constant circling your mouse (with just a tiny bit of manouevering) seems to be a sure path to victory.. it seems just a bit too easy and repetitive.

But the graphics (in the levels where you can actually see anything), the music, the atmosphere.. all superb.

dang, I'm stuck on the second puzzle of the lava area in Visit II.

I, too, am stuck in the lava area, with the red blocks under blue blocks puzzle.

Although, I've lost count of how many color bursts I've snagged, but after getting stuck with the above mentioned puzzle, I decided to give Adventure mode a go.

...then, the unfortunate thing happened. I went all the way to the end of Adventure mode, had one of my twins kidnapped, and color pounced a boss to death.

Hammerfall is an amazing game, I've been following it for a while. I can't wait until the final English version is released, I'll buy it in a heartbeat.

Apparently, if you delete a game you've run out of time on and make a new game in that slot the timer won't be present.

Visit II: Has anyone figured out the second lava puzzle yet (the red and blue blocks)? I seem to be stuck.

Almost broke my mouse when first played Hammerfall (some time ago). Its such a stylish game with wonderful gameplay, a pity its still unfinished (maybe it does improve over time like cheese but I am afraid one day the author may simply give up).

Visit II: Has anyone made it past the second lava level (the one mentioned above -- with red and blue blocks)? I seem to be stuck.

I enjoyed Visit II a lot ... except for the final

boss level, aaargh! i hate those jumping/timing things in games

I can't remember the 2nd lava level, but if someone posts a screenshot i'll see if i can remember what i did.

On Visit II, I can't get *to* the second lava puzzle. How do I get somebody to the blue button? It looks like I have to make a particular long jump across lava that doesn't seem like it's doable.

I'm going to join the crowd and say I also can't for the life of me figure out the second lava puzzle. :(

inky, if you're referring to the lower route, the lighter red blocks are solid. You make a blind leap onto the first one from the previous screen. After you distinguish the blocks, it's pretty easy to get across.

I'm stuck with the first lava level: No matter how i move the blocks they just fall between those actiavation-fields, but since i have to jump to reach them then, i can't move them *scratches his head*

nevermind, i got it :P but i still have no idea how to get to the sparkles, especially the pink one...

Melewen: Thanks! I was actually stuck on the screen before that, until I eventually realized you can jump a little lower by tapping a little more gently.

Anyway, if anyone's still stuck on the red/blue lava puzzle, here's a walkthrough:

Thanks inky... I had just figured it out when you posted that.

Now if I could just figure out this one: http://i4.photobucket.com/albums/y126/melewen_v/misty.jpg

I moved the blocks wrong in Visit II then saved the game (by accident!). When I load, the blocks are still in the wrong place. What do I do?

Jake: if both characters leave a room, it resets.

I think I collected all of the color sparks, but nothing seemed to happen. Does Anyone know what they are supposed to do?

When I got the green one it unlocked adventure mode. It wasn't the first one I got, but the first in the game.

Also, I beat it the first time in 1:36, and the secind time through, to grab the sparkles, was in :27. How did other people do?

Turn on the blues, and push the top block of the 3 block tower onto the red block. Turn off the blues box to let it fall (1/3 of puzzle solved)

Push the red-blue tower on the buttom into the 2nd slot. (2/3 solved)

Push the remaining red/blue boxed into the 1st slot. Done.

In Visit II, right when I'm entering a silvery metal area (the tower, I guess) the game crashes at the same area constantly. Any ideas?

I was stuck on that "misty" room for quite a while melewen, and just now solved it. Here's what i did:

Thanks, twee! Once I saw "step 2" it all came together for me.

Alex, I have been playing the game both on my home pc and today on my work PC, it crashed for me on my work PC. The only difference was I had the sound and music turned off, once I turned them back on the game didn't crash for me, I don't know if that will help but it's worth a shot.

Okay I just finished the game and even though I'm pretty sure I found all the flashy crystals there doesn't seem to be anything special about the ending. Can anyone verify?

Wow, "Username", that did in fact work. I have no idea WHY that works, but it does. Thank you so much.

Alex, the message I got when it crashed was that it couldn't find a sound file. I should have copied it and pasted the error message here but it made me realize that there was a bug in the game that was looking for a sound that wasn't going to be there with the sound turned off! Oops.

Help.
I messed up the second lava level, and now the game is saved with the mistake. How can you rest this level with out having to start over ?

Chuck, have both your guys leave the screen and then bring them back. Once a level is empty it resets.

I know this is probably cheating but, for Visit II,

how do you unlock adventure mode with the "options" file.

Or if anyone could tell me the non-cheating way, that helps, too.

Does anyone know the solution to the green and blue puzzle in the misty area? It's right after the red and yellow one.

Every time I click "launch the game here" it wont launch, anyone else having a problem with this?

Never mind got it running, anyone know how to beat the 6th yellow puzzle?

I love this game but I can't for the life of me figure out how to get past the FIRST puzzle on the lava level. I can get the first two boxes into the holes, but the third box on the top right of the screen seems to be in an impossible to push place. Either it is blocked - or when the friend toggles - it is not reachable. Any clues?