Look! Over there! It's a giant robot alligator with a bunch of little drills going out to get some sushi! Before he sees us, reload your grenade gun with cherries and tap the appropriate key when his sushi order floats over the red zone!

Avert Fate (Mac/Windows, 90MB, free) - Gritty first person shooter designed to show off the capabilities of the Unity engine. For the most part the gameplay is standard FPS fare, but there are some interesting weapons to mess with, and fighting alien ships in the sky is always a plus. Hit detection feels a bit rough around the edges, but you'll forgive any sort of awkwardness when that huge robot steps into your view.

Alex the Allegator 4 (Mac/Windows, 1MB, free) - Platforming pulled back to its basics, even the color palette emulates the green hues of the original Game Boy! This installment is part of a series of wildly different games that includes a puzzle title, racing game, and multiplayer platformer, although I enjoyed Alex's run and jump antics a bit more than the other games. 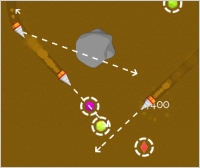 Little Machines Still Goes Deeper (Windows, 7MB, free) - A cute, colorful arcade-style "digging" game where you must control drills burrowing under the soil to collect gems. Click and drag the mouse over a drill to select a direction, but avoid rocks of any kind, as they'll destroy your little machines. Fun time waster, especially when things get more hectic and you have to choose between collecting gems and keeping your drills safe. 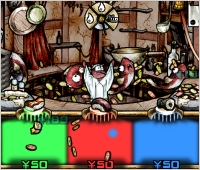 Waxy's Sushi Party (Windows, 12MB, free) - An intense Game Maker-created game of reflexes that marries Dance Dance Revolution-style button tapping to a resource management sim. Sushi orders, represented by colored dots, pass by the red and green areas at the bottom of the screen. Use the keyboard to "activate" the areas while an order is on top to fill it. Keep an eye on the bills section to the right and use the numpad to add up completed orders and charge customers what they owe. Things get frantic pretty fast, but when you get into the swing of things, there's an almost Zen-like beauty to playing. (Note: Game is "Play Now" only, meaning you must install an Internet Explorer or Firefox plugin to play.)

Alex the Allegator? What do you do in that game, sue people?

Avert felt pretty good, albeit a bit repetitive. The game had the right ideas in the right places. The shield idea was really good, but too exploitable. The epicness of some scenes should really be highlighted with some colour. Physics were cool, but weren't enough. All in all, an engine that shows potential, and a cool way of showing it off.

I'm looking for anyone else who plays Avert Fate and doesn't have any bad guys appear. Am I missing something obvious or is there something seriously wrong with my version/set up?

Hey Jay, I don't know if you remember but I posted a while back calling the selection of Weekend Downloads tragic for its lack of Mac downloads and I would just like to say thank you for hitting us with as many as you can in since then. Again I know they can be hard to track down but keep it up! Still loving the site and all that it has to offer. Thank you Jay!

Hi Spinny! Thanks for the kind words, really appreciate it!

Thanks, though, go to JohnB for these awesome Weekend Download features we do!

Woo! You're very welcome, Spinny808. Sometimes the internet cooperates with me. :-)

If anyone else has problems with Avert Fate, like the enemies not showing up, or bullets freezing in midair, it is due to data execution prevention.
Just disable DEP for the game, and it runs fine.

Just... needs guides *grins* I got lost... then stepped on by the robot.

My question, is are you supposed to kill the robot or something... Very confusing *Shrugs* oh well... I'll figure it out *wanders back to the game*

Keep up the great games Jay, everyone else.

In response to Ashiel, to complete the avert fate you have to destroy the robot. Best way I found was to use the number 3 setting on the the enemy gun.

for Avert Fate:
the review promised interesting weapons. I found 2, and neither where very interesting. Am I missing something?

Is anyone else getting various different error messages when trying to access yoyogames.com?

hmmm. I'm having slideshow performance in avert fate even on the lowest resolution/detail settings. That's pretty odd considering I can play commercial stuff like S.T.A.L.K.E.R and TES: Oblivion with passable framerate at just below mid-level settings.

I experienced an unplayable amount of choppiness with Avert which shouldn't be happening (imo) with my hardware. Quad 2.4 /w GeForce 8800 GT and I was still experiencing the same slow down at 640x480 on "fastest". *shrug* for those who got it to work are you using ATI cards?