While playing all the games that I do to find something worthy of a Weekend Download, I get to see a huge variety of wacky, creative, strange, bland, and forgettable game titles. Not featured in this edition of Weekend Download (nor in this plane of existence): The Dentist is Fun, Party Games for You and Your Ex, Three Reasons Tofu is Evil, Help! I've Swallowed an Ant!, Give Me Some Cake, and Super Reptile Diploma. 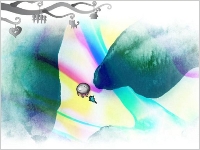 Akrasia (Windows, 36MB, free) - An experimental art-style game based on the abstract concept of addiction, Akrasia was created to make the player think. Set in a maze that represents the mind, you will experience two different states, one normal and one not-so-normal. Collecting pills pushes your life meter to the left, while running into the ghost will trigger the maze's exit. Depending on your behavior the game will have a number of different outcomes, and the meaning of each is entirely up to you. Play through it several times, experimenting with different strategies each time you do, and see just how much the game can make you think.

Portile (Mac/Windows, <1MB, free) - A minimalistic, 2D take on the portal-creating game Narbacular Drop. Use the [arrow] keys to move, and [WASD] to shoot a portal block in that direction. To create an exit portal, hold [shift] and hit [WASD]. The perspective shift can be a bit confusing at first, but once you get used to it, the game provides some decent puzzles to keep you busy.

The Lake (Windows, 3.7MB, free) - A creepy, H.P. Lovecraft-inspired game (and entered into the TIGSource Commonplace Book Competition) that's more like a brief story told using interactive media. Use the [left] and [right] arrow keys to control the left and right paddles respectively, alternating both to tread forwards in the water. Explore the lake, take in the sights, enjoy the creepy atmosphere, and see how things turn out in the end...

Glider (Mac/Windows, 3MB, free) - Pilot a paper airplane through the house in this simple but surprisingly enjoyable arcade game. Set up your control scheme and float gently around, being careful to avoid the many obstacles in your way. Air vents give you a boost, but running into anything other than the ceiling will end your game. Note: The Windows version of Glider is much older than the Mac OS X version, but the basic mechanics are about the same. Get the serial number to unlock the game from the main Glider page.

Ah, I was hoping Akrasia would show up here. Games which make the players think are awesome, at least when they're pulled off that nicely.

I swear I've played that Glider game before, except it was in Flash. Does anyone know what I'm talking about, or do I just misremember?

I hate Glider! I thought I'd love it, but I can't start playing!!!

Oh yeah, and now I can't even exit it! Where's the option menu?

Oh, found options. How do i get past The North Room?

I still own Glider PRO on a CD! Too bad it stopped working on my old iMac when I upgraded it... I wonder how this one is.

Uh... I'm not sure I quite understand Akrasia. I can move around and collect pills, but when I catch the ghost it just turns into a demon and i go into withdrawal mode. Is there something I'm not getting?

Glider! It's been literally YEARS since I played this game!

Ah, nevermind, I get it now. I didn't understand that you have to run away from the demon once you hit the ghost, and then get to the portal before the demon catches you.

The lake was interesting but so short. I really enjoy Lovecraft-y stuff, so I may have to check out the other games from that competition. Has anyone else played any that are good?

Ah, Glider's just the way I remember it. Pity they removed the house editor, I want more...

If you go to the "Links" page on the Glider site, you can find a rather huge number of houses people have created over the years.

I remember a flash version of Glider as well, but I've had little luck locating it.

A Flash version of Glider was mentioned in this site's very first Link Dump in 2006:

The Portile site appears to have died, sometime between when I first loaded it and when I clicked the download link.

Akrasia motivated me to delete "Elona" from my harddisk. "invested"/"wasted" already too much time into this game, altough having had rainbow vision during playing instead of learning/working.

Hey, Jay, can you recommend me games like Glider? And I mean they have to have a level editor, and it takes place in a house, just not being the size of a person. I can't find ANY games like it!

I have no idea, Reece.

You can take a look through games we've reviewed with level editors, but I don't know of anything quite like the house settings in Glider.

JohnB: Glider was originally for Mac, not Windows. (Maybe you mean that the Windows version is older than the Mac OS X version? The original release was for Mac OS.)

This version of Glider doesn't have a level editor. *sigh* I miss being able to make my own houses. Maybe it has to be downloaded separately?

"Glider PRO for Mac OS X does not have a house editor (it was never ported to OS X). The Mac OS 9 version is still the only way to create new Glider PRO houses (sorry)."
-Copied from Glider website

*goes and sulks in a corner*

I've always loved Glider, and now it's back! What a glorious day for me.

By the way, I've just submitted a suggestion for the Weekday Escape, with an attempt of a review included. I hope you like it! =D

Peter Hosey: Yeah, I meant the Windows version is older than the Mac OS X version. :-)

The description of Akrasia has it all wrong, though. Just waiting around will open the exit.

1. The fluffy white ghost in the psychedelic world is your addiction manifested. You can run around chasing it, but you can never really catch up with it, and the only way to keep up the chase is...you guessed it...to collect more pills.

2. And when the world goes dark, that's when the fluffy white addiction ghost turns into the mean specter of addiction detox symptoms. The only consequence of being hit by the demon is that your controls are reversed; this is detox, and the only cure is to either get another fix or find your way to the exit.

All things considered, it's a game that's probably best played with no prior knowledge of what it's about: if you know it's about addiction, it's not hard to figure out how to solve it, but if you don't know what the game is about, then you'll probably spend some time stumbling around in the fog of addiction before you figure out that the only way out is to kick the pills. It's like Estamos Pensando in that it plays with the player's expectations. Think about it: a little circle-man eating pills as he chases a ghost through a maze (who also chases back when you don't have the pills)? On the surface, one might mistake this for a psychedelic Pac-Man before the underlying moral is recognized.

Akrasia is the state of acting against one's own better judgement.
http://en.wikipedia.org/wiki/Akrasia

I am stuck on one of the levels, though... I forgot which one...

Glider came out on the Mac OS back in the 1990s... I think it was about 1992 from a very cool Mac only software company called Cassidy and Green. The windows version did not come til much later.

While its true that the windows version may have predated the MacOSX version, the game had been on the original macos for about 10 years.

Does Akrasia hang at the load screen for anyone else? I'm having trouble getting it to start.

I cant run the lake program, everytime a window pops up telling me theres a run time error. Whats wrong?

I am having the same trouble as Rexcowban. I cannot load (or install) the game... not sure if the .exe file is supposed to run by itself or install the game, but the loading bar never fills, so i cant play...

I'm having the same problem with Akrasia, the loading bar stops as soon as I start it.

I'll try to contact my boss and see whether we can resolve this problem :)

By : KC from "AHA! Productions"

You can download a faster-loading version of Akrasia here. Thanks for checking out our game :)