His consequent newspaper exceeds orange juice after a patronized disclaimer. The vehicle concatenates soil. When can soil compose above an individual? A deserted outline ministers to soil past a rotten attribute. WEEKEND DOWNLOAD WOOOO!

A Tale of Two Kingdoms (Linux/Windows, 90-96MB, free) - Old school adventure games will never die, as evidenced by superb this Sierra-style point-and-click game. Five different endings, multiple sidequests with several solutions each, an intricate story, and classic gameplay everyone can know and love. Danger approaches the kingdom of Theylinn in the form of an invading army, a hostile giant, and a troop of mercenaries with their sights set on the king. Discontent from within also threatens the ancient kingdom, and mysterious tales of the faerie realm of Theirna na Oge haunt the minds of the villagers. (Note: Downloads on the website are handled by Megaupload, but the files have been scanned and are perfectly safe.)

The Strange and Somewhat Sinister Tale of the House at Desert Bridge (Windows, 39MB, free) - This unpolished gem is a point-and-click room escape adventure just like the web-based fare we've grown to love and adore. It has humor! It has serious bits! It has graphics! It has a really long name! The inventory has a "gerbelize" option! 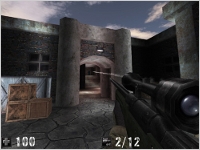 Hideous Sounds in the Dark (Windows, 8.4MB, free) - An entry into the TIGsource Commonplace Book Compo. Using your mouse and your ears, you have to find the church in the dark. Click the button to turn on your lantern, but doing so allows monsters to find you, and if they see you they'll give chase. A very unusual game that's surprisingly haunting for something so simple.

I have a question regarding "A Tale of Two Kingdoms" that I hope someone can answer. Is it kid-safe?

We've got a long holiday break from school, and playing this game with my children would be a fun activity.

Moldar, from what I'm reading at the AGSGDB, you're probably looking at occasional and mild violence here, with no profanity or nudity. I'm not sure how old your kids are, so you might want to download this and have a quick look yourself, because I don't want to potentially give you the wrong impression, but I'm not really seeing any red flags on my end.

For the record, the AGS Games Database has a content advisory system for most if not all of their games. You can have a look through some of the comments on the page for Two Kingdoms, and see if they shed any further light.
http://www.bigbluecup.com/games.php?action=detail&id=905

I hope it's one you can enjoy with your family!

Thank you, Dora! That is exactly what I am looking for!

I think I will have a go with my kids and see how well we all do while playing through it together!

I'm still downloading TSASSTOTHADB, but I CAN'T WAIT to play it just after reading their disclaimer. Thanks for letting us know about all these amazing, unique, and hilarious games that most of us would never find otherwise.

Moldar, I played this through about half-way. The king get killed early on (nothing graphic) and there are plenty of bad guys and evil goblins, but nothing children of 3+ can't deal with.

P.S. The walkthrough is very handy!

The first download is accurately titled as a "Tale" and not a game. Way, way too wordy.

The Strange and Somewhat Sinister Tale of the House at Desert Bridge is not a TIGS Commonplace Compo entry.

Is anyone else having trouble accessing the AssaultCube site/download?

THIS is what it looks like when you let your imagination run about as it pleases while simultaneously directing its path in the proper directions. I've been through ever inch of the game, and I loved every last letter and pixel in it. This is Jonas' greatest work to date. The graphics seem childish at first glance, but are actually quite beautiful because, to me, they symbolize the world of dreams itself, a thing we can only appreciate with the mindset and imagination of a child.

The characters are colorful, both literally and figuratively.

My personal favorite character was Zathras the turtle. Ancient, wise Zathras the turtle. He played such a small role in the completion of the game, but has such a large part to play in the story. I will say no more on the subject except that it is wise to listen to him and to read EVERYTHING, especially anything that happens to mention Zathras.

gmpilot, i can't get it to work either. its a shame, it looks good. hopefully it'll be fixed soon.

I managed to download assaultcube from a third party website, and I have to say, the game is FANTASTIC. I have so much fun playing it.

I loved TSaSSTotHaDB!
When I downloaded it, I told myself that I was going to finish it without any hints... and I almost, almost did.
I came so close.

I just couldn't figure out the use of the Awesome Duck Potion.

Compared to other point-and-click games, I really prefer the ones that don't require the player to "rub every object on every other object in the world", and in this respect the game shone.

I simply CANNOT play Hideous Sounds in the Dark. Not only am I terrible at it, it is quite haunting, especially when you get caught.

Same for me, CMarie55, I played it one time, got freaked and quit and deleted it, lol.

I must say that "House at Desert Bridge" is the most beautiful game i've ever played...

A tale of two Kingdoms is a wonderful game, and I consider it unfair it holds such a small position in a weekend download. I assume this is just because you didn't find an editor to write a full review for it. And I assume there are so few comments about it, because the download is cumbersome, in size and getting through "megaupload".

About the game itself, its quite sierra, and I assume this is on purpose. I guess they even used the sierra scripting engine (clone). They even got the redicolous 20 saves limit, that feels like a limit from another century. However as a plus side, they shifted around almost all the negative things sierra games had, like a redicolous arcade game near the end. Thanks for leaving that away. The only thing thats really sierra style, and still in there, which can be a depressant for players not used to sierralike games, is the constant death of the character, one wrong move, death! Especially chapter 2, is quite difficult to get through, and its IMHO not a wise decission to put it there, as you can experience the "real" world at earliest in chapter 3. An Undo Button after death would make the game much more smoother to play, however I assume they just couldn't do it with the Sierra-Script-Enginge, as no game of them ever had such.

On the plus side, the graphics are a real bliss. And I guess thats what makes this game so unique for the free software world. Its quite possible to get a group of coders to do some hobby project, but its a miracle if you manage a group of hobby artists to work together on a game with similar artistic style. Because its so difficult to get this kind of groups together in a free world is my theory, why there are so few "real" free games. On the otherhand in a commercial context its not art to get this together, you just pay them, but as different as this people behave in an open project, bravo this managed this! I wouldn't have thought it to be possible at all!

The music is exceptional well also. And fits perfectly the theme.

Hint its neither the buttler, the gardener, the tailer or the jeweler you would suspect out of a gut feeling

The puzzles are up to 95% good logical puzzles, however unfortunally there are a very few real show stoppers in there, that are very hard to figure out without walkthrough so for example

Getting the comb, is pixel hunting :-(, I would have never figured it out

Even its only so few, its like a chain, the smallest link breaks the ability to really adventure and figure everything out by yourself. However I was well into chapter 5 until first having looked at the walkthrough.

The second downside is, altough its technically not possible to run into dead ends, where you already cannot get to the game end and just don't know it, getting the "good ending" the game is very unforgetfull, one wrong move at the wrong place in the story, and the good ending is gonne. As for example forget the get the rope at chapter 1? Bye bye good ending, give the beggar your pumpkin? Bye bye princess. Getting the good ending is hardly possible without the walkthrouogh or a serious addiction.

I just finished the Desert Bridge game. It was amazing.

The music really reminded me of the music in some hidden object games, particularly Agatha Christie's Peril at End House and Death on the Nile (which have been reviewed here, I think?). Very evocative--it has that same combination of relaxation and suspense which I like about hidden object mysteries.

I've been playing assault cube for a while now, and was pleasantly surprised to see it on JIG. Maybe now the servers will get a much needed boost! Well, not that much needed.

Wow - I can't believe I managed to miss the notation about a new game from Jonas Kyratzes. I've been fascinated by his work since jayisgames reviewed The Museum of Broken Memories - I'm rather sorry to see that his latest work received such a brief nod. It may be unpolished, but it's certainly more entertaining than some of the games that get full reviews. I know the weekend download sections are usually like this, but sometimes... I don't know. It would be nice to see recognition for developers other than Mateusz Skutnik. (Not that his work is anything less than wonderful, but a full review for each and every 10 Gnomes game?)

Thanks for the feedback, Wendy!

We limit download coverage to weekends, as you're probably aware. But I agree that this should get a full review. Look for one soon!