Two tiny games and one behemoth in this edition of Weekend Download. Aquarium and Little Ghost Joe are both rather cutesy and simple, whereas Nexuiz is gritty, serious, and all shooty with guns and stuff. Variety's neat, innit?

Aquarium (Windows, <1MB, free) - Created for the TIGSource Bootleg Demakes Competition, Aquarium is a take on Bit-Blot's Aquaria game with simple (and rather good-looking) pixel graphics and retro-style gameplay/soundtrack. Quite a bit more shooting and enemy dispatching than the game it's based on, and don't expect the same level of atmosphere. But hey, it's a demake, what do you want?!

Little Ghost Joe (Windows, 10MB, free) - A really simple Mario-style platformer where you play a ghost who has set out for revenge against the still-living man who killed him. In order to do that, however, you have to cross the Evil Mountains and get past hordes of minions first. Basic platforming controls and rules apply, though the camera movement is kind of annoying, even though you get used to it after a minute or two. 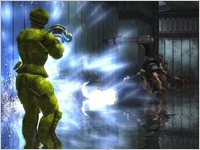 Nexuiz (Mac/Windows/Linux, 375MB, free) - A free open-source deathmatch-based first person shooter. Woo! Comes with a single player human vs. AI bots mode along with true multiplayer, and there are plenty of extra maps you can download and fight in. With a tagline reading "simple, fast, intense, and completely free", how could you possibly pass it up? 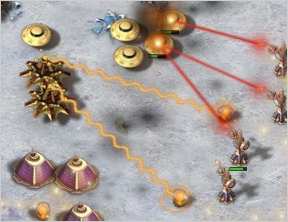 Harvest: Massive Encounter (Mac/Windows, 53MB, demo) - Enjoy frantic real-time strategy games that overwhelm you with hundreds (that's not an exaggerated number) of enemies? Harvest: Massive Encounter, reviewed last spring, is now $9.99, half its former price, and is available for both Mac and Windows platforms. Play the humans defending an expanding plot of land against swarms of alien UFOs, mechanized bots and other baddies. It's an extremely frantic game that draws liberally from the tower defense genre and will probably make your brain hurt from the sheer scale of battles that take place.

OK, Enigma a while ago, now Nexuiz: two nifty games I already knew and didn't bother to suggest...
That's it: I'll browse all the games on my comp and I'll suggest the most interesting ones!

Can anyone tell me what is going on with the ending to Little Ghost Joe? I didn't really understand it.

Booted into Windows to try Aquarium and Little Ghost Joe and was pretty disappointed.

Aquarium was a lovely little game but, for good reason, lacked content. Hopefully the levels will be out soon.Certainly intrigued me about Aquaria.

Little Ghost Joe was, to me, far too unforgiving and frustrating (you die if you touch a narrow enemy sideways, and kill it if you can jump on it?), and lacked variety. After the umpteenth (well, fifth) level of wandering through a grey, featureless world killing the same enemies and jumping on the same platforms and dying about five times a level, I gave up.

Slightly OT... I can't believe I forgot about the Demake Compo! I also can't believe someone made a demake of You Have To Burn The Rope!

For Little Ghost Joe, could someone explain to me why I can't jump on those with helmets/ really dark ones. I'm baffled by it.

Nexuiz sure looks pretty; lots of different kinds of weapons and maps and all... But turning around is cripplingly slow. I adjusted various mouse options to try and fix it, but if I want to turn around and shoot the fella who's killing me, it's like doing a pirouette with a paddlewheeler. Maybe I'm doing something wrong, but after fifteen infuriating minutes I threw my hands up in disgust.