Shooters! Shmups! Games where you hit buttons and destroy things! Vertically scrolling, arena, clones, remakes, minimalistic... shooting games! Thusly is the theme of this edition of Weekend Download. Except for that other game at the bottom... 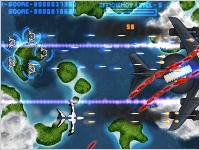 DroneSwarm (Windows, 18MB, free) - Remember Harpooned, the Japanese whaling "simulator" from a while back? Years earlier, the same developer created a one-level side-scrolling shooter which wholly embodies the arcade glory of videogame past. Visually sumptuous in every respect and rewarding skill above luck, the game is a well balanced and highly polished delight. If only its development would continue. Still absolutely wonderful through and through.

Beast Invaders 2 (Windows, 10MB, free) - I'm not sure why, but I love games that are difficult to explain. Take for example Beast Invaders 2. At first it seems like a very sleek Space Invaders clone with new graphics, when in actual fact its a remake of a Space Invaders hack from the Atari days, which replaced the aliens with animals. So its a new version of a hacked version of an old game. Did I mention how extremely well it plays? Well, it does.

Boidtrancer Maniac (Windows, 1MB, free) - In this arena shooter, you are confined to the screen, while you kill Asteroid-like birds who can fly off and on screen as they loop from one edge to the other. Very simple in premise and execution, Boidtrancer wins big on its sound design: A simple twinkle-twinkle for each kill, a sound which then overlaps as you kill in succession to form an impromptu little melody. Minimalistic in the best way. 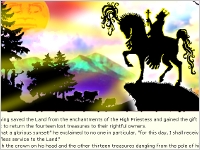 The Fool and His Money (teaser) (Mac/Windows, ~27MB, free) - A short demo/teaser of the upcoming puzzle-esque game. The game plays out with a series of chapters that contain bits of text. In order to proceed, you must solve the puzzle above the text. It's a simply-made game that offers a lot in terms of variety and deliciously devious metapuzzles to solve. You can also play the previous game in the series released several years ago, The Fool's Errand, as well as pre-order The Fool and His Money. (Note: Linux users have reported the Windows version of the game runs well under Wine!)

Vista users
You can run Boidtrancer Maniac if you convert it using the Game Maker Converter. This will allow you to play any of the older game maker games on vista :)

The Fool and His Money seems interesting, but it's a shame the website looks atrocious.

The link of beast invaders 2 seems to be broken, which is really a shame. I need my fill of nonsensical space invader hacks.

The link works for me Kloi.

If the greatgamesexperiment download doesn't work for Beast Invaders, there's a mirror here:

Magique, pay no attention to the website. Instead download At the Carnival, 3 in three, and The Fool's Errand. These are all old Mac games IIRC, back from the 80's some time, but they are magnificent gems shining brightly in the gaming world.

There is enough gameplay in each of those games for a good 20-30 hours, if not more.

And Cliff Johnson, the guy behind these games, have been making games since the 80's, and has quite a following. You know he makes good games, when he can get people to pay up front to buy a game that is not yet released, and have been in the works for 6 years. But all of us who have played his previous games, know what quality awaits us in his next game, which also shines through in the demo version.

I've been waiting for Fool And His Money for years, but I have to say that the teaser is really disappointing - specifically, the scrambled image puzzle where you have to very quickly click on the skulls to keep them from scrambling things even worse. SINCE WHEN DOES CLIFF JOHNSON WRITE TWITCH-REFLEX GAMES???

@ThemePark: You might consider it a testament to Johnson's skill that he can keep people waiting for 6 years and still have some of them excited for his game. I personally wish he had shown a little more self-awareness over those years-- instead of missing deadline after deadline and talking about how great it would be when he was done, how hard would it have been for him to say "I'm sorry, and I know this has gotten ridiculous. I'm not setting another release date until I have something releaseable in hand and am just working out the final bugs."

This post brought me great memories of The Fool's Errand, an awesome game I finished probably 10 years old (and it was already pretty old even back then). Anyway, I spent several hours playing it yesterday, and as soon as I completed one of the last puzzles in the game, it crashed the "Executor" program! Argh! And of course, I hadn't saved in hours.

On CJ's website, he has a fix/workaround for the crash that you're talking about. It's a known issue.

Uhh... I'm not sure exactly how you actually play fool's errand. I've gotten executor up and running, and I got into the game, but I don't see how it's anything more than a story. I finished reading it all, and I'm clueless as to what I'm supposed to actually do.

I loved "Fool's Errand", but the teaser for "Gold" was really hard. The easiest puzzles start at the highest difficulty from the previous game. Part of the fun of Errand was solving the easy puzzles and using clues or skills gained from them to solve the more difficult.

Also, it looks like experience with the previous game is necessary to understand even what to do to go about playing in the first place. Odd since that one is 20 years old.

This game looks like far too much work to be worth my time. If you like punishment and have 3 notebooks handy then by all means, go for it.

@sjdhalkjfgs: each page has a minigame, check the menu for how to get in, or I think there's a "eye" icon on each page

Power of posting, I guess. I figured it out. But some of the puzzles are strange, they don't seem to have any way to beat them, like the wheel of fortune. Pretty confusing.

@sjdhalkjfgs: There are some puzzles that can't be solved without beating others first.

THANKS FOR THE LINK TO FOOL'S GAME! It directed me to find the game that I have been searching for years! its called "3 in 3". that's one of my most favorite macintosh game.

SINCE WHEN DOES CLIFF JOHNSON WRITE TWITCH-REFLEX GAMES???

Since the Book of Thoth? Personally, I liked how it put a new twist on the many picture rearranging puzzles of the original (and it's also not too difficult to fend off the pirates). Though it would've been nice if it didn't happen so often during the puzzle itself.

Also, it looks like experience with the previous game is necessary to understand even what to do to go about playing in the first place. Odd since that one is 20 years old.

All the puzzles have instructions for them by clicking on Help.

I'm not sure how new puzzles will be unlocked in the full game, so can't easily comment on the rise in difficulty. The puzzles did seem more substantial than Fool's Errand though, but not more so than 3 in Three.