In platform games, it's standard fare to jump over or on top of your enemies. Occasionally you are granted a weapon with the rather limited range of directly in front of you. Fortunately, every now and then, an often overlooked method of weaponry is employed: control the hero with your left hand on the keys, while simultaneously aiming anywhere on screen with the mouse, providing 360° of free-firing joyous joy. 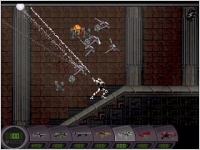 Abuse / fRaBs (Mac/Win/Linux, 200kb - 3.5MB, free) - Originally released in 1996 as a commercial title, Abuse was a dark game which centered on a hero who delved into dark passageways and dingy corridors to wantonly blow away hordes of mutants. A few years after its initial release, it became public domain and has been ported to several different platforms since. The project fRaBs (Free Abuse) was started to give a fresh approach to the game with whole new levels, plus additional user created levels. 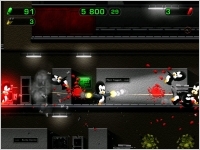 TAGAP (Windows, 97MB, free) - Previously reviewed here upon its initial release, The Apocalyptic Game About Penguins is still one of, if not the most action packed, explosion filled, penguin-centric game with flamethrowers and machine-gun hover tanks to be seen in the freeware market. Throughout the game, you'll traverse throughout different terrain, wielding a host of dual-use weapons while blowing away rampaging zombie penguins. It's a hefty download, but worth it if you missed it the first time.

Easter Avenger (Windows, 5.9MB, free) - In this Easter-themed game, you play not as a jolly rabbit, but as an Easter egg who is sporting a major attitude, disembodied arms and a host of weapons (including a shotgun and baseball bat). Hop through the levels while placidly shattering any fellow eggs who happen to get in your way. Although control can sometimes be an issue, its not often you get to play as an egg in any situation, let alone one with violent intentions.

Well, I am having no luck at all with trying to get Abuse to run. I've tried everything in my ability to do so with the exception of running it through dosbox, which seems rather absurd to be honest. Anyone else having this problem? Anyone know the solution?

I downloaded Abuse, but now I can't find the place to activate it! Please help.

Yeah, I have the same problem mkelican.

- I almost used dosbox quite a awhile back to try playing the game but it seemed like a pretty big hassle at the time. So I was pretty happy to see it had been update a bit and moved to windows.

- It seemed to install fine but nothing happens when trying to run it.

Same probs here. downloaded Abuse, installed it, but couldnt get it to start. tried several compatibility-modes ( 95/98/Me/2000 )...nothing except an hourglass for a second.
The filename already made it clear that the .exe would not work in a dos environment....I tried it nevertheless, since it only took a second ( maybe 8 seconds ) to rule it out. No success, as anticipated.

I'm looking forward to someone telling us how to fix this cause the game looks intriguing.

The Mac version of Abuse works fine, though it's stuck in a tiny little window. It looks so cute like that!

I did not, however, feel compelled to play it beyond the end-of-level fight where you're stuck in a room with a bunch of blue guys - first time I died.

Ok, as far as temporary fixes go, this one kinda stinks. You have to download fRaBs (version 2.00, the newer one for windows seems corrupted), then copy abuse.exe over into your main abuse folder, then run it. You won't get any audio, but it's better than nothing.

Abuse good on Ubuntu. No manual?
Keep getting "text you have entered is wrong".

[Edit: "Text you entered is wrong" when commenting is due to an expired cookie. Sign out, then in again. That should correct it. I'm looking into how to avoid that altogether. -Jay]

Abuse and fRaBs both need to be run in DOSBox on modern systems. I know they claim Windows comapatability, but that's simply not true.

Not necessarily. Abuse runs fine on my system without any hassle. I only needed to run the setup to get it to work. (WinXP)

Shotgun Funfun is another one that would fit nicely in this category.

And Easter Avenger doesn't seem to work on Vista.

I played abuse years ago on win98, I'd love to play it again but have the same problem as some others here. Won't someone please show us a fix? ( I refuse to play it w/o sound... :P)
Once again, Thanks Jay for providing the best online games around! (anybody else addicted to gluefo?)

The egg game won't work for me, same for the other 2, it's real dumb

Ok, better fix than before this time!!

Copy over all the files that aren't in folders for fRaBs, then reinstall and run the setup util to reenable audio. Again, don't run 32, run the one that came with fRaBs. It should work perfectly!

Abuse link isn't working and a google search has yielded no operational download sites. A pity: I loved this game years ago and wanted to revisit its gruesome, high-tension fun.

I don't know if it's ok to post, but the site below apparently has it. Downloaded it, and seems to work fine (at least on XP), no need for DOS emulators. A decent game so far, even if not what I was expecting. Enjoy.

TAGAP works but all the people / monsters are white boxes