Something for just about every type of gamer in this edition of Weekend Download, including a few titles heavy on exploration (one with a grappling hook! :-O ), a psychedelic shooter, and an experimental art game complete with vomit!

Ivory Springs (Windows, 4MB, free) - An unfinished platformer project by Konjak, author of the Noitu Love games as well as the greatly appreciated Legend of Princess game. In fact, Ivory Springs is very similar to both games and has that great Mega Man-ish/Metroidvania feel we all love to death. Being an abandoned project, expect to encounter a few glitches during your half hour or so of gametime. But that half hour is superb!

Kaivo (Windows, 1.1MB, free) - A breathtakingly simple exploration game that drops you in a deep, dark cave with little more than the ability to jump and a versatile grappling hook at your disposal. Use the hook to latch onto walls, floors and ceilings to move around the sparse landscape. Avoid quicksand, touch the disk icons to save, and keep looking for that elusive gold! 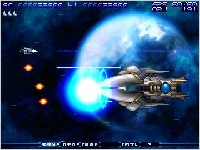 Storm Assault (Windows, 27MB, free) - An unforgiving horizontal shooter made as a tribute to Konami's classic Gradius series. As you defeat enemies you'll pick up capsules that advance a meter on the bottom of the screen. Upgrade each weapon when its rectangle is lit, and don't even brush against an enemy ship or it's all over for you. There are only a few stages to play, but what's there is quite good. The website and game are in Japanese, but the really important texts (weapon names, etc.) are written in English.

The Gutter (Windows, 11MB, free) - A very short and experimental art game similar to The Graveyard in nature. You play a drunken hobo wandering down a dark alleyway. Stop for a moment to admire the ever-swaying viewpoint, take a sip of booze, and maybe even vomit on the pavement. Oh, and is that a cat? If you got a kick out of the free version, donating $5 unlocks a new feature: death! 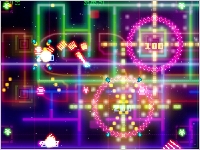 Squid Yes, Not So Octopus: Squid Harder (Windows, 15MB, free) - Psychedelic colors, rockin' chiptune music, tons of things flying around the screen, and you, squid, in the middle of it all, just trying to stay alive. This is a near-final beta release of the game, with the full version coming soon! Be sure to try out the original Squid Yes! Not So Octopus! for more shooting and torture (but still no octopus).

There are parts of the gutter that are glitching, like the the cardboard box, and the intersection. It's flashing very sporadically.

Holy cow Storm Assault is tough, but it's to be expected with those crazy Japanese games. XD

Am I missing something in The Gutter? Do you just go backward and forward up and down the path and across the road, occasionally vomiting, then falling asleep...or is there something I'm missing?

I can't get anywhere in Ivory springs. If I got to the right, I need a wrench; if I go to the left, I need to be able to duck and walk. What am I supposed to do?

You can change the language in Storm Assault by running option.exe and selecting the English radio button. Just thought you guys might want to know.

The Gutter is meant as a parody of The Graveyard, as mentioned in the review paragraph. This is the origin of the "$5 for death" feature.

The Graveyard is also free to play.

Ivory Springs is fantastic, like basically everything Konjak makes. It's a shame the upgrade system never seems to kick in. I was only able to find one defense boost that I could reach. I could see other upgrades, but wasn't able to get to them. The final boss battle was very epic. I would hope he would revisit this concept and make a full game: I'd gladly pay for it.

Kaivo isn't so much exploration as it is platforming. Still, it was fun for as long as it lasted, which was short. One leap of faith early on was the hardest part. Past that, the designer was good enough to put in background hints to show you the right direction, which helped a lot, considering one fall sets you back a long way, even with the checkpoints.

Ivory Springs is so hard >.

I'm only up to the point of killing the huge robot thing. Can't figure out how to kill it when it jumps up on the platform with you XD

Mac users can use Wine too (Darwine, to be specific). Dunno how these individual games run in it yet, though.

Hache, to kill the large mech robot thing you need to:

Use the wrench on it's arms when it raises them, shooting the stars and jumping or ducking the light ray as well. Once the arms are gone you need to jump and shoot down on the stumps where they used to be, you also need to do that to the middle section. Once you've destroyed all those bits he'll jump up on the platform with you and start crab jumping from side to side. You can't be underneath him when he lands, but you have to shoot up at him from below to cause any damage. I did this by running under him to the right while he was jumping left, and running under him to the left while he was jumping right; all the while firing upwards at him. I could only land 2-3 shots/time but after doing this for what seemed like forever, he died. Then the game ended.

"Being an abandoned project, expect to encounter a few glitches during your half hour or so of gametime."

I am NOT an abandoned project!

Actually, when fighting the robot in Ivory Springs:

You can be underneath him when he lands, you just have to duck at the moment he hits the ground so he doesn't hit you. Then he'll spring back up enough that you can stand and aim upwards.

Storm Assault can still be considered easy. Well, not TOO easy. Only the dodging part. The gameplay is certainly hard. I guess I'm not used to Gradius styled games.

I'm finding the saving system in Kaivo weird. It works fine if you die, then you end up at your last save point. However, if you quit the game and load it up again you have to start from the beginning, even though the save file is still intact in the game folder.

Anyone else find the same thing?

When you first enter the cave, there's a fall down a very long tunnel. If you press up and right as soon as you start falling and hammer on the "x" key, you'll disappear off the top of the screen. Jump right twice and the screen should start following you. Continue walking right, and you'll land on top of some ground, right at the top.

...keep walking to the right (if you think you need to, there's a save point if you fall down the first hole and grapple across the ceiling as far left as you can go), always heading up and right. You may notice that some of the squares in the background are lighter than others - this is the path you should follow. If you keep going up and right you'll come to a point where the lighter blocks head straight upwards. Grapple upwards there, and then continue to the right. The gold is in a little cave.

wow, storm assault has got to be one of the hardest games i have ever played. after 45 minutes of struggling, i finally managed to beat the boss at the end of the first level. after which

is another boss... that instantly killed me. i gave up after that.