This week, we'll take a look at the finalists in the 2BeeGames Indie Game Competition. Out of the six, we have previously featured two: Auditorium and Bumps, and the other is technically not a download Buccaneer Battle. Here is a quick rundown of the remaining three amazingly deserving titles. You like to vote, right? After playing these games, go vote for your favorite! 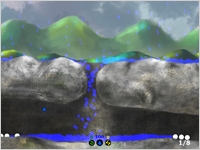 Storm (Windows, 33MB, free) - This is one of those unique puzzle games that comes along every once in a while that makes you sit back and think, "Is it genius or is it just odd?" Using the "powers" of the storm, namely wind, water, and lightning, complete each level by getting the small white balls to fall down various holes and off the screen. The physics are well done, the levels are challenging, and the background graphics are beautiful, invoking a feeling of playing in a painting by Monet. 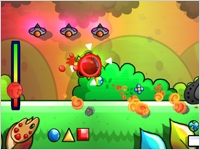 Save the Planet (Windows, 57MB, free) - A colorful arcade gallery shooter where you have to protect the planet Earth from waves of attacking aliens bent on her destruction. As you frantically shoot at baddies, you also have to complete other tasks, such as moving raindrops to make flowers grow. The game is challenging, and the graphics are bright and happy. It's definitely a unique blasting experience. 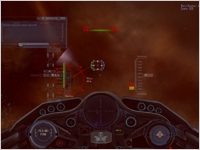 Heresy War (Windows, 161MB, free) - A 3D-space battle simulator with production values that rival commercial releases. Play a fighter pilot witnessing the beginning of a civil war on the outer edges of the galactic frontier. The game includes a full campaign mode and an instant action mode that will throw you immediately into the midst of battle. A multiplayer mode is also planned for the game, allowing you to take on other space pilots from around the world. The graphics and gameplay here are top-notch, putting it in the company of classics such as Freespace.

Make sure that you head over to 2BeeGames and cast your vote for your favorite indie title. The winner will not only receive $10,000 for their efforts, they will also get a publishing deal to bring their game to consoles around the world!

Actually, you have to register before downloading any of the games... But it is really quick, so that wasn't much of a problem. Now I'm downloading Storm, it seems to be a lot of fun!

The website is down. Are there any mirrors for these games?

It's back up again. Please be patient.

Website is down. Storm looked good as well. Shame :/

Storm looks great at first, but at level "stepping stones" it got extremely tiring, pixel hunting, not relaxing at all. Good idea, but IMHO bad game flow.

Along with the lightning being imprecise but needing precise handling for stepping the stones. Argh. No, not with me. [and if there are some more predictable mechanics, they are not very well explained]

The production value of Heresy War is astounding. The fighters remind me of the Kilrathi fighters from the Wing Commander series. I've so missed the space combat sims of way back when.

I have a slight derail that doesn't have much to do with the quality of these games.

I get the feeling that the days of these email registration systems might be numbered -- I don't have anything against them or ShareBee in particular, but I personally have an attitude towards registration walls that leads me to 1) skip the game entirely, or 2) put my back into creating a faux email address that is of no marketing value to the distributors anyway.

I know this is a crucial issue to Jay et al., who have done a lot and continue to work towards the gentle monetization of casual games (in a way that improves their production values, employs talented game designers, etc.) but I wonder whether the number of visitors here who scan for free-as-in-sitting-on-the-curb-with-free-sign-on-it content only is increasing or decreasing. That is to say, as time goes on, will more or fewer people just skip all the demos, special software installations, and email wall games? Maybe only site statistics can tell, and maybe it's not good for the jayisgames business model (which I support, whatever it is) to talk about that.

And if people are willing to go through the registration/demo process etc., is it because the games have particular appeal for those particular players, or because they're a member of some definable group that's just willing to do stuff like that?

Anyway, I've always been curious, and I just crashed Vector Effect by inadvertently right-clicking, so I thought I'd ask aloud.

their site is down again... makes me sad. that and every time I download heresy wars, it says my files are corrupt.

Fake email addresses are around for a reason, heck that's why its so easy to invite yourself to Gmail. I have no problem giving out my fake email address to play a free game... If I like the developer I might even give out my real one.
The Jayisgames Business model doesn't have anything to do with email registration, they get a cut, presumably, from games which are sold through their site, hence they pitch you those sweet hidden object games every weekend. (they might do better to diversify, but then again I'm probably not representative of their demographic).

Don't bother with storm, its a good idea but so poorly implemented that its virtually unplayable. (balls sink in water, the wind rarely does anything, and lightning only shoots straight down.)

SidA: Maybe I'm misreading your comment, but the 2beegames aren't affiliate games. They're free, the site just wants you to create an account for voting purposes. Personally, I don't mind typing out my e-mail in exchange for a game or two. It's not like it's that much work, and sharing info is part of what makes the casual/indie gaming world go 'round.

fattywads: Hidden object games every weekend?!! I'm hurt! We've only featured three HOGs in the last seven weeks. Personally, I'm not a fan of the genre, but many are, so if a good one comes along, we make sure to share. That's all. :-) I do my best to keep things as diversified as possible.

I have a great idea! Let's make a game with menus that cannot be closed with the keyboard, and have the close button nowhere near the menu, and have it look just like the background! And if the user is stupid enough to chose the lowest resolution setting, we can place that button completely off the screen, making it utterly impossible to close the options menu! Thank you Heresy War, I am so I just spent five hours downloading your game!

I'm getting the "Setup files are corrupt" issue with heresy wars too...

My system crashed trying to run heresy wars... twice. Anyone having the same problem? I got a blue screen with lots of text for a quick few seconds before my comp restart itself when i tried to run it after installation.

Do I gather that i can only download the DEMO of Heresy and not the complete game? At least the downloaded file is named demo...

I downloaded Heresy War and got it to run. And I must say, it is very, very cool. Unfortunately, it ran so poorly that it was impossible to accomplish anything. 1/5

It says demo because it is actually more of an alpha release. In case you aren't up to terms with computer lingo, that means it's more of a proof-of-concept than anything else (albeit a very well-polished and good looking one). Essentially, it's a demo, not because you have to pay for the full version, but because the full version doesn't really exist yet.

thx for the clarification.

I know my way around this kind of language - that's why I found the naming of the file odd in the first place :) What I don't get: if it's not a demo, but an alpha, why do they say demo and not alpha? I've met loads of alpha releases that were named alpha... Just curious.

BTW, never mind, for the file just doesn't want to be downloaded for the life of it. Other games from the same site were willing to fly to my pc with a surprising eagerness, but not this one :( But, hey, to quote Barack, I'll "get that sucker" :D

And now I keep getting an error trying to run it?

Anyone any idea what the second mission in Heresy Wars should be about? The one where I'm assigned to escort a ship. I follow it and - nothing happens. But really nothing. I followed that damn shoip for about 20 minutes and the hardest thing I have to accomplish is try to stay awake because there's nothing to do.

Am I missing something???