Just like milk, cereal and toast make for a delicious breakfast, a math-based shooter, a retro platformer and an emo arcade game make for a scrumptious Weekend Download. Seriously, try it with butter or ghee!

JiroSum (Windows, 4.4MB, free) - A one level prototype that showcases a rather brilliant concept for a shooter. Enemies have a numerical value displayed on their face. You can absorb enemies into your spinning plus sign and shoot the sum back at other enemies. The shot travels as a negative number, destroying as many enemies as the value totals. For example, fire off a 3 shot and you can take out three 1 enemies, a 2 enemy and a 1 enemy, or a 3 enemy. Leftover values come back to haunt you, however, so try and time your shots to dissipate with a perfect zero sum. An entry in the latest TIGSource competition.

Tower of Heaven (Windows, 7.8MB, free) - I heart the original Game Boy system. A color palette of green, only the most rudimentary sounds available, and games that made up for being technically simple by pouring on the creativity. Tower of Heaven is a short platform game by Askiisoft that would have been at home on that old system. The goal is to make it to the top of the tower by climbing your way through each room. A disembodied voice taunts you as you go, which adds a light air of mystery to the punishing game. 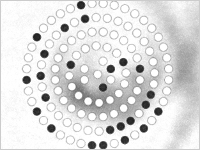 Why (Windows, 43.7MB, free) - A moody arcade game by Mike Inel, Why is all about black and white circles. Move the mouse over a black circle to turn it white. Click a circle to remove it. After a few seconds the circles shrink and another layer appears seeded with its own black circles. The goal is to have as many white circles as possible when the game ends. The real reward, though, are the game's ten endings, some of which you can interact with using the mouse.

You could have done Tower of Heaven more justice... It's a really interesting and compelling game, but the description seems so generic.

Tower of Heaven is a really fun game.

It took me a bit to realize that

GRRRRR. On Tower of Heaven I swear the level where you can't walk left is impossible

Tower of Heaven is really good but quite challenging!

I'd like to play tower of heaven but whenever I open it an error message comes up and it just closes instantly.

Tower of Heaven is fantastic and reminds me very much of the sadistic Mighty Jill Off.

Anyone know what the two secrets are, though?

The first one can be found on the first level where you can't walk left. Instead of going through the door, keep jumping left until you leap over a block and down a (hidden) hole to where the secret lies.

The second is on the first level with the moving platform (just after the first secret). Once you've arrived at the exit to the level, drop down back onto the moving platform after it passes under the exit and it'll carry you through a hidden passage towards the secret. You cannot just jump through this passage, you need to ride the platform.

All I have to say about this is that I want to be playing "Why" and have someone come ask me what I'm playing so that we can both share some sort of Abbott and Costello moment together.

Markonite2: Tower of Heaven IS a pretty generic game if you think about it. Single-screen platformer. Jump around. Avoid spikes. Make it to the exit. It's very good, though, which is why it appears here. Sorry I wasn't poetical enough. :-P

I didn't quite catch the ending on Tower Of Heaven. What happened there?

I wish ToH had a death-meter so you could see how many times you've died playing it.

Tower of heaven was a really fun little 15 minute game. I absolutely loved the music. The rules that kept getting added made it all the more fun.

Ah - Tower of heaven does show your deaths when you beat the game.

I cant finish the grass door level in the tower of heaven game. Whenever I jump and try entering I simply get killed by the grass. Is there something that I do not know about or does it just require pin-point timing?

I wondered about the ending of Tower Of Heaven too.

I thought it should have maybe been a little clearer on why the tower fell.

Is the second level of tower of heaven supposed to be invisible?

@Mystify -
No, apparently that's a problem with your graphics card being incompatible with the game.

I was afraid that was the case.
I'm not sure why it would be incompatable. its a mainstream card.

I'm having the same problem as Mystify with Tower of Heaven. I have a GeForce 8800 GT and am running Windows 7 RC.

Ah: Tower of Heaven shows you your death count when(/if?) you finish. On which note, thanks enormously, Commander Jim. I wouldn't have figured that out. Thanks also Jay_0 for the secrets; I got the first one on my own because, uh, I got my keys mixed up and thought the door was a fake because it wouldn't let me enter it because I was pressing the wrong button...

Just to let people know ahead of time, Tower of Heaven appears to fail under Wine. It gets as far as displaying an initial splash screen, and then gets stuck in an infinite(?) loop printing the error message:

Apparently off-screen rendering in DirectDraw is less than fully-implemented.

Towers of Heaven did not keep my saved game after I switcched off my computer.

Which is extremely annoying.

I had some glitchy black blocks around many things in Tower of Heaven, the same problem that I recall the game Spelunky has with Nvidia graphics cards.

Playing a video file in fullscreen mode seems to fix the problem for me.

Is there any point to finding the secrets in Tower of Heaven?

Finding the secrets earns you an alternate ending.

I vote for Tower of Heaven getting its own review.