Two heavy-hitting detective games hit the casual scene this weekend, one a re-release of a classic point-and-click title, the other an exclusive from a seasoned adventure development studio. Each one spins an unforgettable tale using famous crime novel monikers everyone should recognize. Although the titles take strikingly different gameplay approaches, each one offers a deep mystery experience wrought with hidden agendas, misleading clues, and plenty of riddles to solve. 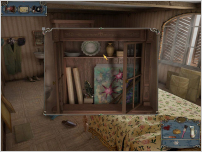 Sherlock Holmes: The Mystery of the Persian Carpet (Windows, 82MB, demo) - From Frogwares, the developer behind a number of Sherlock Holmes adventure mysteries, comes a casually-oriented game that puts a new spin on the series. The famous Sherlock Holmes receives a letter from Scotland Yard detailing a murder where the body was rolled into a rare Persian carpet. Not ones to turn down an unsolvable crime, Holmes and Watson set out to gather clues and piece together a suspect list.

Similar in gameplay style to Escape the Museum, you'll travel to various locations via an overworld map, hunting for items in each area and solving light puzzles and minigames along the way. The hidden object and adventure themes are well-balanced, but the game is strangely linear and performs a lot of the detective work without your intervention. The story is where the meat of the game is at, and if you can look beyond the often less-than-stellar writing quality, this almost plays like a Sherlock Holmes story meets Mystery Case Files. 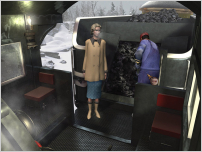 Agatha Christie: Murder on the Orient Express (Windows, 1.2G, no demo) - A train stalled on the tracks due to an avalanche. A man murdered in his room. Footprints leading through the snow away from the crime scene. All of the pieces of the puzzle are there, but it's your job to put them together. Play as the young Antoinette Marceau following the vigilant guidance of the famous detective Hercule Poirot. Speak with passengers, gather evidence and assemble clues (both verbal and physical) to find the culprit.

Agatha Christie: Murder on the Orient Express's strengths are rooted in its narration, setting, artistic direction, and wonderful storytelling. Some of the puzzles are a bit trite and end up being little more than miniature fetching quests. But the game has withstood the test of time quite well and can proudly deliver a delicious adventure mystery experience to a whole new group of gamers. Unfortunately there isn't a demo for this title, which is a significant drawback, but if your interest was excited by the words "mystery", "adventure", or "classic", this is a no-brainer for you.

Did not like the Sherlock Holmes game at all. Not really much of a hidden object game, is it. More like a 'guess how the interface works' game. POS

I might have the bar set too high for "enjoyable adventure game," but I found Murder on the Orient Express disappointing. So much of the early part of the game is spent waiting for someone to walk across the screen, and though I appreciate ambience, I didn't feel that what the game showed during those walks helped to build it. There's a few odd but unfortunately characteristic lapses of logic; one is very early on, so hardly a spoiler---

if one's to avoid stealing the sample tile and bowl, morally speaking, then why does the sample that one shows to the arguing men disappear? As long as we're walking all over, might as well walk to return both samples.

Not my cuppa, anyway.

The later Agatha Christie title, Evil Under the Sun, is better than Orient Express IMO. As a Christie fan, I found it more fun to actually be Poirot instead of some tacked on character.

Since I love hidden object mystries I was very exciting when I got my Game Splash newsletter from Big Fish and saw a new Sherlock Holmes mystery. Sadly the game seems to be broken in some way for me... no sound or music, even if I restart, and no matter how I fiddle with the options. Without sound and music there's no atmosphere.
I've only played for 10 minutes but I find the gameplay not intuitive, very cumbersome.

Also I don't like how there's only a full-screen option.

Not gonna buy this one.

I was very excited, not exciting. Haha. (I'm always exciting!)

Re: MotOE. Without spoilers, how is the plot and the writing? I know they changed the solution from the original novel. Also I hear the voice acting is very good, is this true?

What does "no demo" for the Orient Express mean? That it's fully functional?

Tried Sherlock Holmes and it is total crap! After 2 minutes it froze up before I even had a chance to search anywhere. Restarted it and played for 5 minutes, or blindly poked along I should say, since there's little indication of what you're supposed to do. Then it froze again and when I tried to close the program it crashed my computer. DO NOT WASTE YOUR TIME ON THIS!

Wow, some serious technical issues, there. Both games ran just fine for me. Skim through the BigFishGames troubleshooting article and see if anything there fixes your problems. Don't hesitate to use the "Contact Customer Support" link at the bottom of that page if you still can't get it to run. There are few things more annoying than game crashes, not even doing taxes! :-P

As for their quality, I agree that neither title is the greatest gift to gamers since Maniac Mansion, but the atmosphere and stories really drew me in and gave me incentive to overlook the interface/puzzle shortcomings. Sherlock Holmes has a few rough spots and either holds your hand too much or too little, but the summation of my experience was good. It isn't for everybody, though.

joye: The plot and writing in MotOE are both great. It deviates from the novel quite a bit, but you can tell it's a classic whodunnit from the get go. Voice acting I would give an 8 out of 10, there are a few stilted lines and awkwardly recited phrases, but overall it's really well done.

bioLarzen: It means no demo is available due to the large file size, you must purchase the game to play it.