Each week we churn through dozens of downloadable casual games searching for just the right ones to feature. Is it interesting and fun, or is it just another clone? Does it have pretty pictures? Much like our weekly Link Dump Friday feature, this edition of Weekend Download highlights some of the games that, for one reason or another, didn't quite make it to a full review, but are still unique enough to be worth playing. 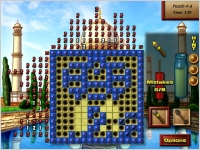 World Mosaics (Windows, 37MB, demo) - If you're a picross nut like me, seizing this game is a no-brainer. If you're new to these puzzles, here's the scoop. Much like sudoku, picross (picture crossword) utilizes a grid, but here the numbers outside are your clues to which tiles should be filled in and which should be blank. The challenge is to find out which tiles are filled and how many spaces are between the groups, and the result is a picture! World Mosaics has an extensive tutorial (almost too extensive) to get you into the picross groove. And once you get in, you won't want to get out.

Most of what World Mosaics delivers is standard fare in the picross world, though the archaeological premise does add a little extra flair. The mouse controls are simple to use and the puzzles get progressively harder as you play. There's enough content to keep you busy for quite a while. I grew tired of the cutesy presentation after some time, and the facts presented after each puzzle quickly became a pointless diversion between my intense picrossing rounds. Even though World Mosaics doesn't pack a big oomph, it's simple and enjoyable, plus it gave my picross addiction some much-needed attention.

Cy-Clone (Windows, 150MB, demo) - Shooters tend to stay in the obscure realms of independent gaming, but once in a while a title comes along that's both accessible and fun for casual gamers and shmup fans alike. Cy-Clone is similar to the winner of our 5th Casual Gameplay Design Competition The Last Canopy in that your ship absorbs the powers of enemy ships and uses them as weapons. With each foe you clone you get an unlimited normal attack as well as a power attack that's unique to that enemy, each one more interesting than the last. On top of that, the stage artwork is imaginative and varied, creating a surprising amount of depth for your eyes to behold. Sometimes the effects look ten years old, and the variety of ships you can absorb leaves a little to be desired, but it's still a rockin' shmup experience with an excellent twist. 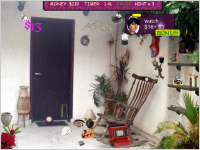 Yard Sale Junkie (Mac/Windows, 61MB, demo) - If a time management game and a hidden object game got married and had kids, Yard Sale Junkie would be the result. Mixing item hunting with serving customers, you travel from house to house sifting through yard sale junk (ahem, "treasures") and matching them to thrifty customers that stop by. Because it straddles two popular genres, Yard Sale Junkie is worth a try, but the presentation leaves something to be desired. The photo backgrounds do not mix well with the items, and some of the font/color choices make this effort look a bit amateurish.

Hey, Cy-Clone is pretty sweet. Yeah, it could use a little more enemy variety, but there's a decent amount of depth in what they've got. Some of the enemies with weaker primary guns can block bullets with their secondary attacks, or attack behind you. Plus, you can play the entire game without cloning enemies, just absorbing enemy bullets and throwing them back. Good stuff.

I wish some levels weren't quite so purple, though. Makes it hard to tell what's going on when the enemies, the explosions, and the little rotating sparks in the background are all different shades of lavender.

I didn't actually try out World Mosaics, but I'd never heard of picross before. I googled and dug up some free ones, it's a pretty fun concept.

Thanks for the heads up on that one :)

We have a tag for picross with some very nice free online versions we have reviewed:

Look at that! I been working through TylerK's, now I got a few others to check out if/when I get through it.

I know of several free picross sites that are superior due to their large puzzle selection and lack of annoying plot to click through, but I must commend World Mosaics for finally getting the interface right. Entirely mouse controlled, with no tedious process for switching between Xs and marked tiles. Numbers automatically crossed off right when they should be. That alone almost tempted me to use a game credit on it...Too bad Dell has taken well nigh a month to send me a working hard drive. *muttered obscenities*

Before anybody thinks about paying to download Yard Sale Junkie, you should go read the Bigfish forums. There have been LOTS of technical issues with this game. I DL'd the demo, and it ran, but there was no sound at all.