Sometimes you come across a game that looks amazing and receives nothing but praise from all the reviews. Everything looks positive and you just can't wait to play it — then you notice the download size. It's massive. How can you justify downloading something so large? Sure, it might be good, but maybe you'd like something that would be a little quicker to download. So here you are, five games that provide a decent experience at a fraction of the bandwidth.

iFactor (Mac, 1.5MB, free) - A tiny little math game by 10101 Software that has absolutely nothing to do with the Xbox Live Arcade title of the same name. In this simple title you multiply numbers to get four in a row. Pick a number, your opponent picks one from the opposite row, the factors are multiplied to form a product. Play against the computer or against a friend. 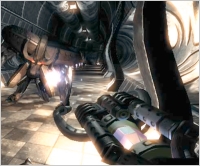 .kkrieger (Windows, 96kb, free) - Quite easily the most impressive game ever made - in under a tenth of a megabyte, this first person shooter has atmosphere, multiple weapons, non-human enemies, many rooms and fitting sounds. As you move through the nine rooms in this game, you'll scale a giant staircase, do away with scuttling bugs, giant monsters and face a huge, mighty contraption at the end. Note: It's still beta, so if you get stuck in a wall, press [M] and a number from 1-9 to warp. That minor bug aside, it's still an impressive package for the size.

Masashikun Hi! (Windows, 240kb, free) - Usually Kenta Cho is known for his frantic shmups, but this release under the ABA Games banner is incredibly different. A collection of five mini-games, each starring wriggly stick figures on a blueprint background. Choose either one of the games, such as trampolining or high jump, or play them all in succession in attempt for a high score. Strange and somewhat addictive.

Vlak (DOS/Windows/Mac, 31kb, free) - Clocking in at a miniscule 31 kilobytes, this is easily the smallest playable download game I've ever come across. Featuring a plethora of levels and PC Speaker sounds, this cute Snake-like game has you collecting items to hook onto the back of your train, then out through the exit. It works under DOS, so any Windows should be able to run it (if not, check out the freeware application DOSBox, which also allows Mac users to play).

Minimal Yahtzee (Windows, 85kb, free) - One for the old-fashioned gamers out there, who still like their games a little more board-y than the rest. Yahtzee is a classic dice game where the object is, amazingly, to get the highest score. A lot has been squeezed into this tiny package, including smooth graphics and transitions between screens. The scoring is also quite complex and true to its real-life form.

Seeing a FPS game the size of .kkrieger blew my mind away the first time I found it. A very neat game.

Not so small (700k), but there is another great Yahtzee download that used to be playable online:
http://www.rekenwonder.com/yahtzee.htm
Triple score. Wheeee.

Just to double check my download, Minimal Yahtzee doesn't have any sound, correct?

Minimal Yahtzee has a very soft sound when you mouse over things. It's nothing to miss.

With .kkrieger size its amazing that they can do this, I wish that this sport (demoscene) would catch on with most big videogame developers, have entire levels be proceduraly generated providing a random play with each new game, just having set points for cut scenes, hek the guys who made .kkrieger said that if they had stored it the normal way, it would have been over 200-300 MB,

Oh, but it has. Will Wright has said during his presentations about Spore that he has been inspired by the demo scene and procedurally generated content, and you can expect to see evidence of that in Spore.

You can even see it already in the recently released Creature Creator.

About the DOS game: DOS games are 16-bit, which cannot be run on 64-bit systems. On these systems, an emulator (such as DOSBox) is required.

I have no clue what's really happening in Masashikun Hi!, but it's somehow incredibly fun.

Wonderful post - love the Masashikun game. I'm not sure how long it takes for a submission to go through, but the game I just recently finished and submitted for you blog - a remake of Gravity Wars - is 88kb (and would fit in this post quite well). To those curious to try it - visit my site ;)

Once again - thanks for the awesome blog - LOVE IT :)

Kkrieger was really "a bargain" with this file size.

Though... Has anyone else experienced a dramatic drop in the computer's performance after wuitting the game? The game itself ran OK, there were no errors, I encountered none of the bugs mentioned on the homepage. But, AFTER quitting the computer performed like a C64. Even closing programmes and getting to the restart menu took like 20 seconds each...
I dunno what might have caused this - recent, state of the art graphics games run smoothly on this PC, I doubt it was an insufficient memory issue :)

But the game itself was fun.

Sad iFactor is a Mac only game - looks fun.

Any game that runs in Dosbox will also run in Dosbox on Linux.

Hardly none of the games run on my computer. I prefer a bigger file size in the tradeoff the game actually working...

dial-up friendly downloads... i humbly bow at your feet, o master! :D thank you so much for this post! i can't wait to play these games... except i don't have to!

.kkrieger is amazing, i love shooters.

I can't really play .kkreiger, the framerate is so slow when I run it that it really is impossible to play. Any one else experience this? I love fps and really want to try, any way to fix this or is my computer really that crappy?!

Oh yeah, my first time on here in a week or so and I noticed a big change!! the website looks totally different. Is this a melding of two "casual" sites or simply a cosmetic overhaul?