It's not Halloween, but there's always an open space for abandoned theme parks, midget jesters, and overweight clown ghosts in your gaming schedule! Weird Park: Broken Tune fits you in the fedora of a detective set on the case of John Flatter, a journalist who went missing in the town of Fairy Gate. You end up in an old theme park, complete with derelict equipment and dusty attractions that look like they're about to eat you. A journalist's work in a hidden object adventure is never done, however, and the more you poke your nose around, the stranger things get. Yipe! 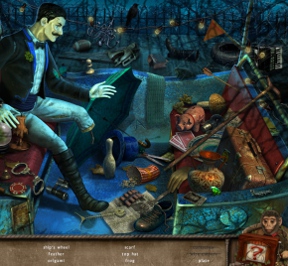 In addition to hunting for John Flatter, you'll also stumble across the mystery of Louis Gauche, an apparently talented (but undeniably creepy) clown who was killed during a death-defying juggling/unicycle/tightrope performance. It's unfortunate enough knowing that he's dead, but to have his ghost turning up around every corner, scaring the hat off of you and lighting fires in ferris wheel carts, that's another story entirely. Also: who is this little jester fellow who is always one step ahead of you?!

Following a casual adventure layout with an inventory system and environmental puzzles, Weird Park: Broken Tune uses hidden object scenes sparingly, and when it does, they're short, simple, and switch between "find the list" to "find the fractured items". Most of your time will be spent hunting for key objects that sit comfortably in your inventory, waiting to be used. Each small area features a handful of puzzles you'll need particular items to solve. Wander back and forth, picking up new things as you open new areas, returning to previous places to make use of your shiny new toys. 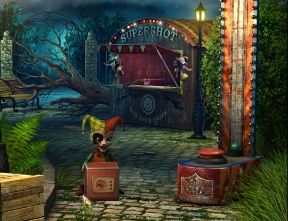 Analysis: Weird Park dares to enter the crowded hidden object scene with yet another spooky adventure-type release. This one stands out a bit with its excellent visual presentation and gameplay that never stumbles over itself trying to give you everything you could ever want from a hidden object game. It's simple, and that's what makes it so good. Also: scary clowns make it good.

For the most part, puzzles are logical in nature, so you won't need to use a rusty nail to dig a hole or toothpaste to seal a crack in a dam or anything like that. Sometimes, though, you'll wonder why one item can't be used in a particular location. Why can't a crowbar pry a battery out of a car? And how many types of hammers are in the world and why do you need every single one of them to progress?

Weird Park: Broken Tune's main drawback is that it recycles quite a bit of content, forcing you to walk back and forth frequently and making use of hidden object scenes multiple times. More than once you'll revisit an area to find new items only a few minutes after you initially searched it from top to bottom. It's not nearly as exciting to see the same stuff over and over again, even if the list of items is different.

Weird Park: Broken Tune may have a nondescript name, but the game underneath knows exactly what it's going for. It's a great-looking and wholly satisfying hidden object adventure that will last longer than most games in the genre.