What Makes You Tick:
A Stitch in Time (demo) 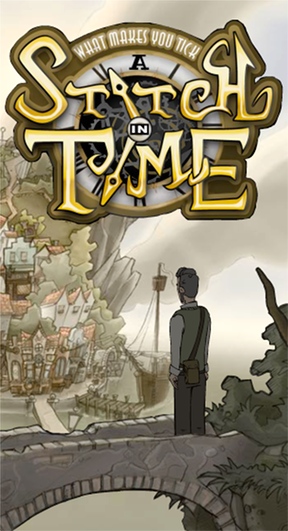 What Makes You Tick: A Stitch in Time is the upcoming sequel to What Makes You Tick, a free downloadable adventure game from a few years ago that you really should play. Right now, if you can. Go ahead, we aren't going anywhere.

Pretty great, huh? Cool story, awesome artwork, classy semi-Victorian (or hemi-Edwardian) style. Sort of makes you agog in anticipation for a sequel, right? Don't worry, developers Matthias Kempke and Greg MacWilliam are on it. You can read their helpful FAQ if you want to know more about the sequel, but until it is released, Messrs. Kempke and MacWilliam have put out a demo, available both for download and for your browser, playable right now.

A Stitch in Time is not a traditional sequel, for it doesn't exactly pick up where the original left off. Instead, it starts a new story with a new protagonist that overlaps with the continuation of the previous story. You play Nigel Trelawney, just arrived at the town of Ravenhallow to settle his late, estranged father's estate. You quickly discover that this is no simple matter, as Ravenhallow has been overtaken by a sort of parochial Fascisti that, among other injustices, is making it really bothersome to move freely about town. The demo covers the introduction and first act of the full game, which is quite a bit of adventure game to sample.

A Stitch in Time uses the Lassie adventure game engine, the creation of developer Greg MacWilliam. I find the Lassie control scheme to be slightly counter-intuitive at first, but really easy to use once you get the hang of it. Click to move Nigel about Ravenhollow; click and hold to bring up the verb coin, which you can use to look at, touch, or talk to the character or item you click on. Your inventory contains all the items you collect, which you can access by moving your mouse to the bottom of the screen. Click on an item to use it, click on another item in your inventory or in the environment to use them together, and double click to dismiss the item. Like other adventure games, the goal is to collect and combine items, talk to characters, and use items to solve puzzles in order to advance the story. 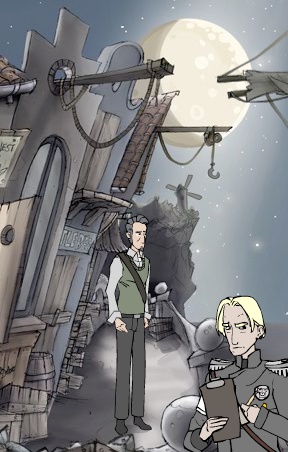 Analysis: A Stitch in Time leans more towards the "serious" side of adventure games, as oppose to more off-the-wall fare like Sam & Max or the Monkey Island saga. Funny adventure games can get away with a greater breadth of puzzles, because silly solutions fit the mood of the game. A goofy puzzle in a serious adventure game will rather break the mood instead, so puzzle design in such games is a lot trickier. I am pleased to report that A Stitch in Time achieves, at least in the demo, in the creation of a variety of engaging puzzles that don't violate the tone of the story. I wouldn't call the puzzles super-clever, but they are challenging enough to be interesting without ever feeling overwhelming. I found that if I took a break from the game whenever I got stuck, I could always come back to it and succeed.

I was always glad to come back, for the story shines. With a few small details, the game conveys the intrigue, drama, and sadness of the situation Ravenhallow finds itself in. Chat with the fishermen at night and sympathize with their plight. Talk to the guards at the Port Authority and catch the whiff of casual arrogance. Apart from the immediate story, the larger world has a fascinating texture that is hard to place. Is it steampunk? Science fiction? A period piece or alternate history? A modern setting with vintage trappings? It's probably a combination of all these plus a number of unique ideas. Whatever it is, I simply like the idea of a world where a place like Ravenhallow can be modern and interconnected, yet isolated enough that it can suffer the problems that it has.

The Stitch in Time team obviously strove for classy production in all areas, and it shows. The character design is great, the sound design is super, and the background art is amazing. Take a look at the view of Ravenhollow in the title sequence, or the ship Sparrow bobbing in the dock next to the harbor district. One aspect of the production that is missed is the lack of voice acting which, along with some stiff character animation, makes the characters seem a little flat. I can hardly blame an indie team of two developers for not hiring a full voice cast, however.

The demo to A Stitch in Time is quite robust, and is as long or longer than most other free browser-based adventure games. The download version promises better graphics and sound, though you do need to download the separate Adobe Air player to make it run if you don't have it already. Either approach is terrific and offers the same great taste of what promises to be an excellent indie adventure game. Keep your eye on this one.

Play What Makes You Tick: A Stitch in Time

What Makes You Tick: <br />A Stitch in Time (demo) Walkthrough now available!

What Makes You Tick: A Stitch in Time Walkthrough

Welcome (or not) to Ravenhallow

End of the Demo.

What Makes You Tick: A Stitch in Time Walkthrough

Welcome (or not) to Ravenhallow

End of the Demo.

Sounds pretty interesting, and I wanted to check out the original first, but it seems to be no longer available.

To play the original, go to the developer homepage and click games, then click What Makes You Tick. It will bring you to the official download page of the first game.

I'm guessing that when A Stitch in Time launches, it will not be freeware.

I've updated the JIG page where the original game was covered with the correct download link.

Got it, thanks Jay!

Great game. Too bad I can't get the original one to work on my mac (intel.) If anyone knows the problem and a solution please let me know.

Don't really like how I have to hold down the mouse for a second to get the menu to come up. Any faster way to do this?

I accidentally picked up an item in my inventory and now I can't put it down. How do I do this?

How to put down an item: You can double click with the right mouse button and it will go back into the inventory.

Great game, lovely artwork and music, fairly intuitive puzzles.
However I found it really slow, and was easily bored with the prolonged conversations.
Enjoyed the demo, but probably won't download the full game.