Winter Voices: Avalanche is a quiet, slow-paced, and very different kind of tactical role playing game. You play a young girl living in a snowy village whose father has just passed away. Dealing with the emotions that follow is difficult, and the mysteries surrounding her father's past makes it even more challenging. Avalanche is the first in a series of episodes telling the story of Winter Voices, and if you're looking for a game that's heavy on emotion, character, and storytelling, this one won't disappoint. 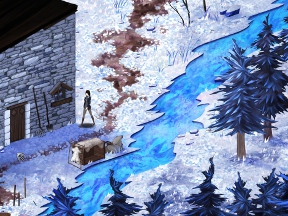 The game begins as many role playing games do: choosing your character, including picking a portrait, profession, and adjusting your stats. You won't find the usual "strength, intelligence, wisdom, etc." in Winter Voices, though. Instead, traits such as Memory, Will Power, and Perspicacity are available, each representing a portion of the main character's emotional makeup while simultaneously serving as the mathematical basis for the role playing part of the game.

Winter Voices is very text-heavy, and you'll spend plenty of time walking back and forth talking to people and navigating conversation trees one choice at a time. The dialogue options available to you are based on different attitudes a grieving person might adopt at a time like this one, ranging from mournful to angry, teary-eyed and even sarcastic. You gain experience from talking to people, so even if you, yourself, aren't feeling chatty, you'll find a reason to begin conversations. 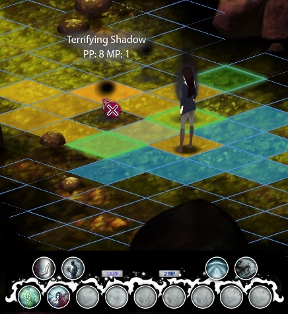 Perhaps the most interesting part of Winter Voices is the combat system. Most games give you a weapon to hit things with. In Winter Voices, though, your only weapons are "spells", and even those spells aren't spells in the conventional sense. Each time you enter a battle, you're facing off against your own inner emotions. Enemies are representations of different feelings or nagging thoughts inside your head (Shadow of Doubt, Insistent Memory, etc.), and doing battle with them is a symbolic way to move forward. You'll use skills like Betrayal, which causes you to deny your own personality in favor of a better one, thus preventing far away enemies from damaging you, or Courage, which increases your energy points for a few turns. The spell list goes on and on, as evidenced by a portion of the snowflake-shaped skill tree pictured below. All of this fits perfectly with the game's somber storyline, and it's the perfect way to tie in gameplay with plot.

Analysis: Winter Voices: Avalanche is a very unusual experience, and Beyond the Pillars is bravely trying something different with an established genre. The team was obviously going for story and atmosphere over gameplay, and the sense of lethargy that pervades the game is sometimes overbearing to the point that you feel a bit down yourself. Mix that in with slow battles, a grieving main character, and emotional reminders in every screen, and you've got a game you really can't take lightly. 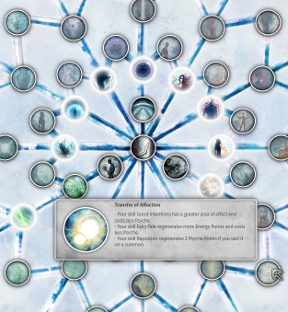 The game's music and visuals are beautiful, there's no other way to describe them. Everything feels calm and cold. Not a peaceful and happy calm and cold, but an anticipatory sort of feeling where mystery is abound. The atmosphere is expertly set to suit both the gameplay and the story, and you'll find the writing is equally poetic and mysterious.

Even though Winter Voices provides a great interactive experience, it's not quite perfect. You'll find the combat is painfully sluggish at times, and waiting for enemy animations to complete is a bit boring. In fact, the whole of the game seems to move a little slow, something that fits well with the story, but when you're out and about exploring the countryside, you don't want to wait 30 seconds while your character walks across the screen. The writing, while vivid and poetic in nature, can border on pretentious at times, but I never felt it was too over the top.

Winter Voices: Avalanche provides a unique role playing experience with a great presentation and storytelling that will really engage you. The gameplay shortcomings will hopefully be tended to in future episodes, but as it stands, Avalanche is a great experience for the right kind of player. It's not a cheery game, so if a bit of moody storytelling is what you're looking for, Winter Voices will do the trick.