"Long ago, in the Middle Ages," begins Elefun Games' hidden-object adventure Witches' Legacy: Awakening Darkness, a witch straight-up shanked another witch, because things were way more hardcore back then, and they didn't have time to wait for more than ten seconds into the opening cutscene to start murderin'. In present day, or at least as present day as 1995 gets, our hero Jack is visiting his mother and little sister for dinner, but arrives to find a garden gone wild and his sister possessed, though on the upset, technically this always makes him the good sibling just by default. Turns out Nikki's body has been commandeered by an ancient witch, who was murdered by her fellow spiteful apprentice, and it's up to Jack, and a transmogrified wannabe witch, to save Nikki and put a stop to things. With the option to play a memory matching game instead of hidden-object scenes, customiseable difficulty, and a whole slew of gorgeously bizarre locations, Witches' Legacy: Awakening Darkness is refreshingly magical and creative, though... not particularly easy to take seriously. 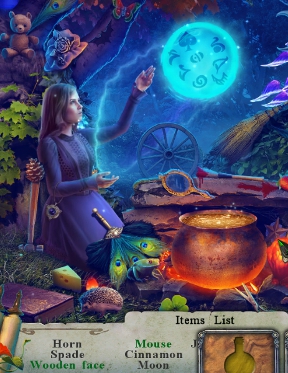 Let's get this out of the way right now... Awakening Darkness is weird, though mostly in a good way. One early puzzle involves discovering a crocodile hatbox is allergic to feathers because... reasons. There's a jumpscare with a ferret. There's a hopping... mailbox... scarecrow... thing in a band uniform. And things only get weirder from there. If that sounds good to you, well, good great! Awakening Darkness' sense of humour and twisted whimsy is actually sort of refreshing in a sea of serious, spooky casual adventures, and while that means the more dramatic moments feel a little goofy, it also means it has a feeling of real creativity and style that keep you hooked. The plot is a full of strange characters and stranger circumstances as Jack sets off to rescue his sister, and throw the aesthetics and tone of Howl's Moving Castle, Willow, and a bunch of '80s music videos into a blender and you'll come close to what it feels like to play. It's pleasantly strange, with a infectiously gleeful weirdness to its plot and design, though if you start to think too much about what's happening it does sort of fall apart into an overcomplicated muddle of conveniences and talking animals. How?! Why?? Who cares, evil Raggedy Annes! If you've been looking for something that doesn't take itself too seriously, then Awakening Darkness is definitely the perfect choice to kick back with. 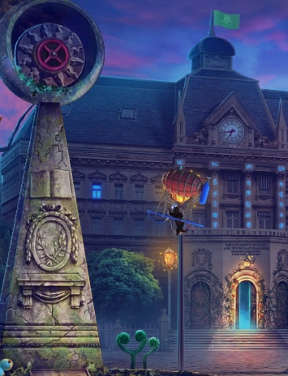 There are a lot of superfluous things to click on in every area that mostly serve to offer up little animations or quirks, and while they don't actually have anything to do with the gameplay directly, it is sort of nice to feel like you're actually exploring an area for what you need instead of just swinging your cursor around to find the hotspot. You'll find a wide variety of puzzles throughout the game, and Awakening Darkness balances its hidden-object scenes and classic point-and-click adventure-y very well, often weaving more exposition into both. Backtracking exists, but is kept from being too frustrating because of how the game is structured, constantly moving you to different locations to explore instead of being rooted in one particular area. Click detection, however, can be a little fiddly in hidden-object scenes, which, while multi-layered with little puzzles of their own or extra items to find to unlock lists, just aren't as interesting as the rest of the game. What's nice is that while you do get the token cute animal companion, Bertha's a talker, and it makes a surprisingly big difference to have a character with actual dialogue and a personality as your guide. Witches' Legacy: Awakening Darkness does a remarkable job of incorporating the lore of the rest of the series without feeling as if its simply rehashing old material in this installment, and if you're looking for something fun, vibrant, and more than a little oddball, it's an easy recommendation.

The Left Behind - A Forgotten Hill Tale

6,496 Views
5 Comments
chrpa— Jayisgames needs your help to continue providing quality content. Click for details Paul had been playing the whole afternoon with his friend when they took the shortcut home. Then a really bad man grabbed them and took them away. He...  ...

4,184 Views
0 Comments
chrpa— Jayisgames needs your help to continue providing quality content. Click for details Hi! Weekday Escape and Weekday Puzzle are here! We start with another two Selfdefiant's state escapes and then get trapped by Omura in their living room. Slimomo...  ...

4,985 Views
1 Comment
chrpa— Jayisgames needs your help to continue providing quality content. Click for details Rinnogogo's hotel you are escaping from is awesome - not that it just looks comfortable, it is. Soft armchairs and sofas stand in every corner inviting to...  ...