World Riddles: Secrets of the Ages

One of the best things about casual games is that they can take you to far off places you'll likely never make it to in real life. It's especially nice if the game can manage to take you to another time as well since that pesky time machine is still in cost overruns at some secret, hidden government facility. Never fear, World Riddles: Secrets of the Ages is here to transport you to ancient civilizations in Europe, the Far East, and Central America where you can marvel at the stunning scenery and learn a bit about the culture. Oh, yes, and play tons of picross! 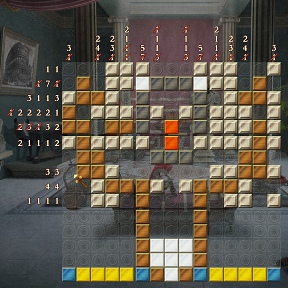 Picross has been around a long time, long before computer games even. Those of an older generation may know of it by the names "color by numbers" or "pencil puzzles". The basic upshot of picross is to create a picture from an empty grid, using the numbers at the top and side of the grid as clues. The numbers tell a player how many blocks need to be filled in with an empty space around each group of numbers. If you've never played picross before there is a handy tutorial within the first section that is easily skippable by those who have loved this game for many a moon. Eventually every block in the grid will either have been filled in or removed to reveal an image. For those who love logic puzzles, picross is among the best!

The controls are easy to master and include a hand cursor (to fill in spaces) and a hammer cursor (to remove spaces) that can be switched either with an on-screen button or with a handy right-click of the mouse. For those new to picross there is an "autofill" option available in the options menu that removes empty spaces automatically. For those who disdain the hand-holding the autofill does not automatically come on, it must be chosen as an option. As with many picross games there's not much story to World Riddles: Secrets of the Ages. You simply travel to one of seven eras of history, solve a simple slider puzzle, and then off you go on the picross adventure. World Riddles has some nice features to help break up the gameplay, not only with the slider puzzles that open each era but also with the ability to "enhance" each location by buying new items to place within. Earn points by solving a puzzle below the expert time, by finishing without using hints, or by finishing with no errors and use those points to buy things to decorate the spaces, and get a short history lesson about these artifacts as well. Finishing each era, which involves 20 tough picross puzzles, unlocks a speed-play bonus round for that era. Bonus round play is fast and furious on a countdown timer and each era's bonus round is tougher than the last.

Analysis: World Riddles: Seven Wonders, the precursor to Secrets of the Ages, wasl a fantastic picross game that featured an easy to use interface, but was an otherwise pretty bare-bones game. Secrets of the Ages has kept the easy interface but ramped up the backgrounds and other visuals to make the playing experience even more enjoyable. Rather than grainy and static the backgrounds are colorful and include small animations to add more interest and the filled-in picross pictures now come in colors rather than monochrome. There is a downside to all of the visual interest, however. With the tiles appearing in color against the more colorful backgrounds it can occasionally be difficult to distinguish between an empty space, a space that hasn't been clicked, and a filled-in space in some of the puzzles. This can cause problems not only to those who have colorblindness but also to those whose eyesight is a little blurry, making a few of the puzzles more difficult than they need to be.

Despite a few missteps with the colors, however, World Riddles: Secrets of the Ages is a worthy successor to Seven Wonders and is a definite must for all picross puzzle fans. Hours and hours of gameplay awaits along with a lot of interesting trivia about various objects from different historical times. Be warned, however, picross can be very addicting. Just try to remember to take a break every once in a while.

Would not buy not only because of the color conflicts, which I would have tolerated if the cross hairs were optional. The cross hairs are mandatory and so is my not buying this game I have waited for.