Sugar Blossom Village looks like a little slice of paradise. Well, maybe not your particular corner of it: the farmhouse you've just bought is admittedly a bit of a fixer upper. But the people are friendly and hard-working, content with their lives far away from the bustle of the city, close to their loved ones but friendly to strangers. And yet, there does seem to be something missing: a warmth and a magic that some of the older townfolk, as happy as they are, seem to be yearn for, sad that their children do not feel the protection of nature as they once did. Perhaps it has something to do with Noah Hayseed. Even years after his death, townsfolk still talk of his life and secrets as if he was still around. Maybe you can find out more, but until then, there are crops to plant, fishes to fish, livestock to raise, members of your preferred sex to woo, and (mini) games of LockBall to wager on. That's what life is like at the World's Dawn. World's Dawn is an life/farming simulation by Wayward Prophet quite similar in nature to the Harvest Moon series, with a nice touch of fantasy RPG plotting to keep things interesting. Four seasons of the game, Spring, Summer, Fall, and Winter are in development, with the first two already released. Play as male or female, and engage in romances with men, women, or both if you wish! 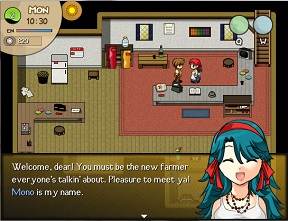 Use the [arrow] keys to move your character, with [spacebar] or [enter] used to interact with items and people, or to confirm a selection. [Esc] or [X] opens your inventory knapsack or cancels a selection. There you can assign tools to the [Q] and [W] keys. As World's Dawn has quite a lot of things to do in it, it's recommended to check out the Beginner's Guide on the game's website. Generally, though, it's a good idea to start by exploring your surroundings, meeting your neighbors, and discovering the various ways you can turn the little bit of money you start with into a little bit more. Holding [Shift] will let you dash, but watch out for the energy meter in the upper left: life isn't great when you're too tired to enjoy it. [D] will call your loyal dog, who can help people open up to you, but you might find yourself talking about how cute he is, rather than the local gossip... and be sure to keep him fed! World's Dawn is presented with a quickened real-time system, and the villagers will keep to their own schedules throughout the days and weeks and seasons. You'll have to balance the amount of tasks you do throughout the day with the amount of energy you have, while hopefully having enough left over for a bit of a social life. Really, it's a game that's good to jump in with both feet and not worry about making mistakes as you experiment. All the people in town are rooting for you after all. 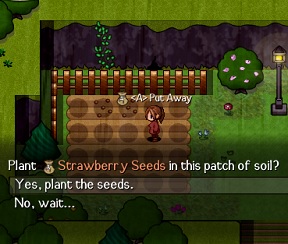 Though only two of the four seasons have been released, World's Dawn is an excellent example of its genre, and life/farming simulation fans should find it right up their alley, especially for those looking for memorable character interaction. It's a game made for a gamer looking for that certain kind of bucolic experience that is often found in the Animal Crossing or Virtual Villager series. As a game, it's slow-paced, sweet, and a little repetitive, though it's hard to imagine a farm sim that wouldn't be by necessity. Sugar Blossom Village is a town straight out of an RPG, but rather than to serve as home base or to be destroyed to further the plot, its daily challenges are what make up the bulk of gameplay, with just a touch of magic around the edges. The graphics and music are familiarly anime in their simplicity, but original, and the mechanics make it easy to accomplish what you set out to do. The biggest difficulty will come in orienting yourself to your new location and all of its options. It's almost paradoxical to say, but the initial lack of direction can make it seem like there's too much to do and it all moves so slowly. One can imagine it a game best played at the player's own pace for a certain amount of time each day, to relax and unwind a little from the hustle and bustle of life. Even at 50% complete, there's a heck of a lot in World's Dawn to discover, and many will find it well worth discovering.

Good game. I'm looking forward to the release of fall and winter.

This game isn't for everyone, but for a few of you it will be a breath of fresh air.

A few hints -
1. Build friendships with neighbors and love-interest by giving gifts. Each person has 3-4 favorite things and will only except those items. You can find a list of what each person likes on the World's Dawn Wikia.

2. There is a mine where you can mine gems. It is behind the abandoned fish shop.

3. It takes about two weeks before your animals will start giving eggs or milk, invest early, so you can start getting a steady supply.

4. Many of the recipes require food that isn't available in the current version (like onions), so you may not want to spend money on cooking appliances. Don't buy recipes, unless you know you will be able to make them (There is a list started on the Wikia page). Hopefully the Fall and Winter expansions will be available soon.

5. You can't rob people like you do in many other RPGs, but can snoop around other people's house to find recipes and 'borrow' supplies like alcohol and vinegar.

I really like this game, but when I got to summer, the game became very laggy. So laggy it hurt my eyes.