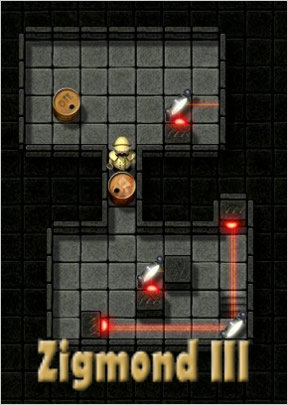 I am not a patient person. Usually when people suggest I take a break from the games with the explosions, bright colours, and bombastic music my response is a respectable pthhhbtbtbt. I don't want to sit around, methodically plotting out my every move, deciphering mazes and puzzles. At least, I didn't until I met Zigmond III, the latest game from Microsheep.

Zigmond III is actually the name of the hero, a roly-poly little detective hot on the trail of the intimidating Mr Evil (yes, really) who has stolen some of the greatest masterpieces of the art world. It's just like James Bond, really, only instead of getting strapped to an easily escapable table with a laser slowly inching towards your bits, you're pushing blocks and mirrors around cramped mazes, Sokoban-style.

Each level has only one goal; to reach the staircase to the next. It sounds simple, but Mr. Evil is true to his name and has set up an array of lasers blocking them all, and you'll have to figure out a way past if you want to save the day. Click on an area to have Zigmond patter over to it. Click on mirrors, crates, and barrels to have him push it in the direction he's facing, providing nothing is blocking the way. While crates and barrels will block the beam completely, mirrors will also reflect it, so make sure you're not standing in the wrong place when you move one in front of a laser. You can click the Undo button on the side of the screen indefinitely to go back a move, but be careful. Get zapped by a laser, and you'll have to start all over again. 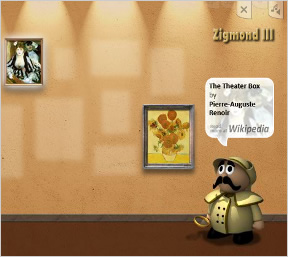 Analysis: Don't let Zigmond's body-by-Pillsbury physique and the game's cuddly appearance fool you. Some of these puzzles can be hair-pullingly difficult if Sokoban-style gameplay isn't your thing. After all, not everybody is looking for the sort of joy one can only get while nudging tiny barrels around the screen and accidentally frying yourself with a laser redirected by a mirror you were moving. It's slow, thoughtful gameplay, and you either like it or you don't.

The being said, if you do enjoy this sort of thing, rejoice! Zigmond III is as pure a puzzle experience as you can get. For the most part, you can ignore the timer on the side of the screen, since its really only there to make you feel bad about yourself. Ditto the step counter. The game wastes no time amping up the difficulty, so completing each stage really feels like an accomplishment. The puzzles are some of the most well designed I've seen in a casual game, so go ahead and give yourself that pat on the back you want to every time you complete a level.

In fact, if you were to ignore the puzzles completely, Zigmond III is actually very easy. There's no penalty for how long you take to solve a puzzle, or how many steps you take. No matter how many times you fry yourself with a mirror, you can always just start the level over again. There's no penalty other than the sting of your own ego for your failure.

Despite a rather high level of difficulty for the uninitiated, Zigmond III is a highly enjoyable puzzle adventure that plays as simply and as well as it looks. If you enjoy mazes, or don't but feel as though you should be punishing yourself for something, Zigmond will offer up a nice chunk of gameplay for all ages.

Thanks for sending this one in, Ez and Yoav. Cheers!

I found some of the longer, cluttered stages a nightmare and quite boring, really. (For example, the question mark stage.) I didn't enjoy that type, and when I got to the second one of those I figured it was time for bed.

It would be nice if you could navigate the menu buttons with the keyboard. It would also be nice if there were more of a plot that unraveled as you solved levels. The game does a great job with level design though.

Does it still count as "free" if you can play the first 20 levels but have to pay for the last 30?

Nice idea. Pity the graphics are a bit dark.

Wow. I must be abysmally pathetic at this game. I can't get through the final tutorial level. And since it seems I can't even play the entire game unless I pay for it, I don't think I'm going to bother to figure it out.

Scratch that. It was the first level of the first mansion (1-0) that I couldn't figure out.

Something's up with that 1st level, Cornelius.

I couldn't figure it out, either.

You have to use the 3rd (bottom) mirror on the 1st laser, because it points the right way. No way around it.

But you can't move the 3rd mirror until you move the other mirror & barrel away, i.e., into the path of the lasers. No way around that, either.

Catch 22. I don't see how it's done. For that matter, I don't see any concrete evidence around the web that ANYONE has finished it (the 1st level, much less the game).

Oh, well. Sorry guys, you made it too hard. I guess I'll be playing something else. Sigh. It would be nice if some (any?) flash games were relaxing or fun (maybe even both!), instead of frustrating or (like this) totally impossible, good for the 90 seconds it takes you to learn to play, then not at all.

Hopefully, the power of posting will inspire me to see what you're supposed to see here.

Yep, I was right; the power of posting.

You do have to move the middle (top) mirror first, because there's no other way.

Push it right up against the 1st laser.

Do the same with the 2nd mirror & the 2nd laser. It doesn't have to be used on the 1st laser, like I thought.

Then block the redirected 1st and the 3rd laser with the barrel where they cross.

The issue here, I think, is with the enormous difficulty curve between the last tutorial level and 1-0. The tutorial maxes out at, what, 18 or 20 moves? This one requires almost 5 TIMES that many. More than a full order of magnitude more difficult. Poor balance, I suppose. I don't think this game is a lot of fun, but I suppose if you're really into these kinds of puzzles, it could be worth the time.

I like these types of games. But the difficulty curve is way too steep and sudden on this one. Which didn't allow the game to capture my interest and make me want to continue. I've played some hard games, but by the time they got REALLY hard, I was invested and wanted to finish. Not here.

Remember you can block a laser with one object, then place another object closer to the laser to enable to you recover the first object.

Push the crate down one cell.

You cannot use the mirrors to block the laser on the right. One will zap you the moment you push it into the beam, the other will redirect the beam to point at the exit, which leaves you with the same problem.

So you need to get the crate back out of the beam. If you put one mirror in the beam you'll block your escape route, and if you use the other the laser will bounce off the other mirrors and trap you...

The rest of the solution:

First line up the "/" mirror one cell up and to the left of the laser. Then put the "\" mirror into the beam below it. The laser is redirected into the wall. Now it is trivial to use the crate to escape.

OMG thanks for your help. I don't think I would have thought of that route at all. Here's hoping I can do the rest, I may be back!!!!

Microsheep's site seems to be down =(

Thanks weeble for the solution to 3-4.

That was nice. I do wish I could play the rest of it without having to pay, though.

I found that if I left the levels I was having problems with alone for a day, I was able to come back to them and complete them with no problem. Just a hint for people who are having trouble.

Anyone purchase the full version and have any idea where solutions to can be found. Having hard time with 8.0. Any help?? Thanx.

i need help with 8-1 please

Bought the game, having a blast...stuck on the final level. :[

Laughing about comments here about "impossible" levels. As I play each level, I do run into ones that just baffle me. I've only been playing this game for about a week, and I'm on 7-4. And yes, this level seems as "impossible" as others have seemed and yet somehow if I keep tinkering, I end up finding some way to get to exit.

I love this game but can't wait until someone posts walkthrough video on YouTube!