Firebeast's latest title, Zombo Buster Rising, is a zombie game with a difference. First of all, it's cute as a button. No nasty gore at work here, just cutesy PG sprays of ketchup. But don't let that fool you, this game can get rough when it needs to. Unlike the original Zombo Buster with its fussing with elevators, this game is a straight up defensive shooter with a strong upgrades system and odds just shy of overwhelming. Aim and fire your little upgradeable pea shooter with the mouse, and use the [1], [2], and [3] keys to deploy other weapons like bombs and time stoppers. It all adds up to a survival experience that's at the peak of what browser games can offer. It's also pretty funny to boot. 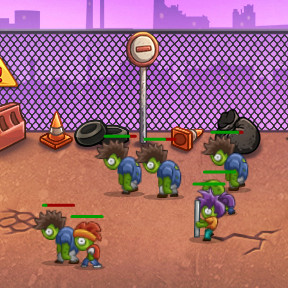 Zombo Buster Rising follows three adorable defenders of humanity as they blast back the hordes of the infected. You play as the pistol-wielding leader of the crew, but you'll find yourself relying heavily on your teammates, a sniper and explosives expert, as each battle heats up. Your partners can't be controlled but they can be upgraded in terms of firing rate, damage, and special abilities. There are also erstwhile soldiers scampering about on the battlefield that you have to avoid shooting while they sprint for cover, making every fight feel fluid and chaotic. Upgrade-savvy is a must in this game, and fortunately, while the difficulty ramps up at a good clip, the game isn't afraid to reward you for good work. Achievements come with a monetary bonus so you've got plenty of incentive to do well in each fight. Plus the prizes you get are just darn fun. There's nothing quite so satisfying as blowing a horde of zombies into chopsuey with a well-placed brick of TNT. Zombo Buster Rising dodges many of the pitfalls that hinder similar games and offers a well-balanced, thrilling and fun distraction for any defender of humanity to enjoy.

The "spells" are too weak to save for emergencies, but have too long of a cooldown to use as filler attacks. And the rewards are a bit low.