It's likely that anyone who has ever sat at a desk job has encountered the boredom buster Minesweeper. Such a great way to make it over the afternoon lull, as long as the boss isn't looking, that is. (I swear I got Dora's permission before spending hours on this game. Promise!) Galta has brought the old favorite back to our attention in the mobile multiplayer puzzle game A Few Billion Square Tiles, for your iOS device. So now you don't even need a desk job to be able to play. You just have to pull out your phone. The goal is to reveal blue and yellow tiles on the board to capture as much territory as you can while at the same time getting the highest score you can. All while other players from around the world are doing the same thing. 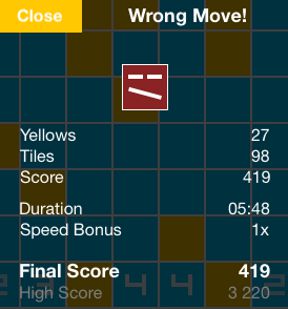 Tap a square if you think it is a blue (regular) tile, and long press if you think it's a yellow (mine) tile. Blue tiles show a number indicating how many yellow tiles are touching them, and you must use logic to figure out where the yellows are located. You'll be randomly assigned a starting place on the world map, but you can scroll on the minimap to find new locations to grow your area if you get surrounded. If you inaccurately mark a tile, your game ends, a small area around where you were working in is wiped and given new blank tiles, and you are given a score. The score is based on how many tiles you revealed and the duration of your game. There's also a bonus awarded for speed.

There's more here than just minesweeper. The multiplayer aspect makes it not just about revealing mines, but about capturing as much territory as possible, which compels you to come back later to play some more. There's even a real time map where you can go and type your name in to gaze from afar upon your lands, and to track who has the current high score. The yellow tiles you find are currency in the game with which you can buy a couple of different bonuses. Sonars briefly reveal hidden yellow tiles, which is useful if you're stuck and can't see your next move but don't want to risk a guess, and wipers get rid of a 5x5 section of the board so you can hone in on opponent territory. These both are sometimes found randomly on the map as well. If you make or join a clan, tiles of all the members are counted together, and you can check the leaderboards to see which clan has the biggest kingdom. There's also a contest every hour to see who can get the highest score within that time. You can use the compass in the lower left of the map to save an area location, and even share it with your clan friends so they can work next to you to expand, or to showcase some of the hidden pixel art you might have discovered. Join the JayisGames clan, and help us... dare I say it? Rule the world! Or at least make it into the top ten.

It seems like there's a bit of a difference between this and Mienfield because of the time scoring and the mobile focus...

We're at 86/198 clans at this moment, and that's with just two of playing. Anyone else want to join in? It's where all the cool kids play.

We've broken the top 50 and that's with just 3 of us playing. Anyone else want to join?

I joined the Jayisgames clan a couple of days ago and almost doubled the tile count. It's weird that you can't find out who the other clan members are.