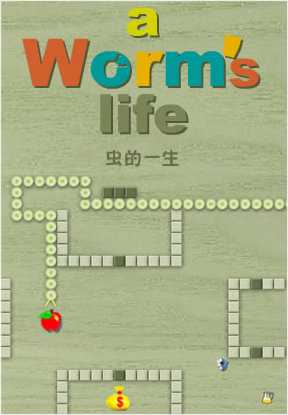 Ok, I honestly did not plan on posting all these Snake games, they just appeared before me—landed in the proverbial lap, I tell you. It must be due to some magical alignment of the cosmos. Nonetheless, this Snake clone one-ups the others with style. Created by the same X-Woods folks behind the previously featured Differences game, A Worm's Life features an array of elements that change-up the gameplay formula of this simple arcade game and transforms it into even more addictive, fast action fun.

The core mechanic remains the same: the arrow keys are used to navigate the worm right, left, up and down. As an alternative, the game offers a two-key option that the author suggests: use the [1] key for left/up and the [2] key for right/down. After all the practice I have been getting at these games using all four arrow keys, switching to two was difficult for me to do.

Apples are the worm's food, and each level requires you eat a set number of them before advancing to the next. While pursuing the fruit, various other items will pop-up into play adding spice and variety to the game. Bombs are to be avoided, as are walls. Running into them will cause you to lose one of the five hearts you start with. A red liquid bottle increases the worm's speed; a yellow liquid bottle reduces the worm's speed; a green liquid bottle increases the size of the worm; hearts increase your hearts by one; and gold increases your score by 100. Shields are cool in that they provide the worm protection from bombs, and allow the worm to pass through light colored walls.

A Worm's Life redefines the game of Snake, turning it into a fresh new experience. The level design features wall placement that gives each level variety. The sound effects are well designed, and the lounge music soundtrack is just my style. After the past couple of days playing the other Snake games, I found myself playing this one and I couldn't pull myself away from it. It's that good. Click.

I wonder what a worm is.

This game doesn't load on my computer

Bobo - the X-Woods site has always been one slow to load. You simply must be patient, and you will be thusly rewarded. =)

the game was fun to play

did anyone else notice that level 23, i think, looks like a swastika?

In Japan, and I think other parts of Asia, a symbol that looks like a swastika is used to represent Buddhism...