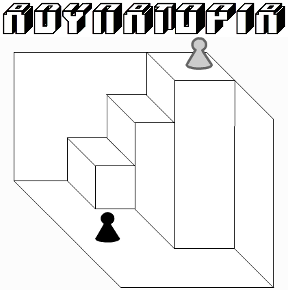 Imagine a dimension not only of sight, but of mind; a venture into a confusing land whose boundaries are imagination. You're next stop... Adynatopia. Doo-DOO-Doo-doo-Doo-DOO-Doo-doo. (Cue the Twilight Zone music.) This should help put you in the right state of mind before you journey into Louis (T)'s unique puzzle platformer, where you control a black pawn in 4-dimensional space.

Using [arrow] keys or [WASD] to move and [spacebar] to jump, your goal in each of the 14 M.C. Escher looking levels is to touch the grey checkpoints. It seems like some impossible jumping, but that's the challenge of the game. What looks like a platform above you isn't necessarily 'above' you. You'll have to warp your perceptions and make careful use of the depth jump ([spacebar]+[up]) to complete each level. This game will blow.your.mind! Or possibly just blow it up, to which some JiG reviewers can attest.

You are just a pawn in my game.

Nice idea, but the controls feel really weird, and sometimes you finish levels without even realizing how.

Funky. I do like games that make you reinterpret projected 3D (such as isometric 3D) as just the 2D canvas. I think I've played a couple of other games that did it a bit better (can't find the links now), but nonetheless, this is good fun. 4/5.

You'll need to use the depth jump.

Fall down to the platform you were transported to and collect the last checkpoint.

I thought the same as you about the controls when I first played, but they just feel weird because they're following a different set of physics rules than we're used to. For me, part of the fun of this game was figuring all that out! (Which I didn't admittedly do until the last few levels.)

[Edited so the solution above is for the right level. Oops. -Kyh]

I think he should make it that the spacebar is an alternative to clicking the "Next" button.

I'm having trouble with level 6.

How do I meet up with that last figure? The one who moves to where I started out? I keep missing that jump.

I'm surprised Echochrome wasn't mentioned as an obvious inspiration. Both are great games

Walk around the shape. Where are there surfaces that are measurably the closest together? Remember, this game follows a different set of physics rules.

It was. From the main menu, click "Be a Game Elitist."

@Kyh, can you be more specific on parts one and two of your solution? I've been trying that since forever and I must be in the wrong place or wrong direction or wrong key combo.

I'm having trouble with level 11.

@ Sam Dulmage: Are you having trouble depth jumping? It's [space]+[up]. I find it easier sometimes to hold space and then press up versus tapping both at the same time.

You need to be standing at the top edge of the base platform.


@ ray9na: Thanks for the heads up on my solution for level 9, it's edited now!

How you interact with shapes depends on how you approach them.

Thanks, Kyh! I was more or less doing what you said to, but I guess I wasn't quite in the right spot. On to level 12!

Good game. A little difficult. Wish that the movement was more fluid. And perhaps a better character design than a pawn. Perhaps in a sequel.

I'm beginning to suspect that the last level doesn't have a solution...
Also, I feel proud that I know most of the games this game is inspired by.

I must be the only one who feels like this game doesn't make any sense, then. I have made it to level 12, but half the time I'm not sure why what I have done has worked, so I can't use that knowledge to help me through the later levels. I find myself doing a lot of random jumping. I'm not saying the game doesn't work, it's just frustrating to not be able to understand WHY it works.

I got the first checkpoint on the final level. I still don't understand why this works. However:

You have to go to the upper left of the "7" shaped area, depth jump behind the main body of the structure, and then push the down key to direct your fall onto the lower platform. Make sure you aren't in front of the structure, though, or you fall.

Even trying to explain what I did I feel like I'm talking complete nonsense.

After the first checkpoint you are teleported to the upper left platform. Somehow, and I'm still not sure how it happened, there is a hidden tunnel through to the back of the block, from which position you can jump to the top for the second checkpoint.

Now I need to go do something in regular 3D space or my head might explode.

You are just a pawn in my game.

I'm beginning to suspect that the last level doesn't have a solution...
Also, I feel proud that I know most of the games this game is inspired by.

In level 10 I can only see the checkpoint at the bottom "island" and no other. I get this one and have nowhere to go. What do I do with this? Where should the second one be?

@ blighty: Have you looked through the walkthrough above? The other checkpoint is

hidden behind the shape.

@ Kyh: I looked in the walkthrough and, as I understood it, I went past the top (jumping from the opening onto the "3D top" and then going up and past the top edge). I fall on the lower-and-behind ledge where I start, but don't see any other checkpoint on the way. I went past the top both on the left and the right to no avail.

At the beginning, walk right. Before you head down around the corner, look above you and you should see the hidden checkpoint.

The trick is to be both inside and outside the object at the same time. Once you do that you need to jump around the ceiling in a straight line. good luck mate

I've read the walkthrough several times, but it's not enough. I cannot consistently get to the first checkpoint -- I think I've made it in 3 out of 100 attempts. And I cannot make heads or tails out of how to get to the second checkpoint.

I've re-played the rest of the game many times, and each time I understand it a little better. But level 14 taunts me.

Here are more detailed steps for Level 14 (I'll edit the walkthrough above to reflect this too):
1st checkpoint

This time around, I was actually able to reach the first checkpoint on my second attempt.

And as for the second checkpoint, I guess I hadn't hit quite the right spot to reveal the path. Once it became visible, it was all *puts on sunglasses* clear to me.

[You're welcome! Yay for making it through all the levels :) -Kyh]

@ Kyh: Thanks for the good words. It turned out the shape of the hidden checkpoint was to bleak for me to see on my monitor, therefore I couldn't see it. However, I made a screenshot, lowered the gamma on it and POW! there's the (now doubly) hidden checkpoint. Thankfully, the video drivers have an option to lower the gamma letting me actually play the game. It's still a bit ridiculous, though.

The walkthrough over complicates the last level.

stand on the far end of the 7 shape, close to the left side but not close enough to touch the wall. Jump and hold left. You should be able to consistantly get to check point 1 now. The trick is that you cannot be behind something that you are already in front of.

I'm the developer, I know all the tricks. There is an Easter egg on level 6 that says "you are just a pawn in my game". Ps kyh many of your comments are spot on, almost like you went through my notes. I would link but I'm not allowed to.

@ IIAOPSW: I'll reword my walkthrough to simply it.
And thanks, I'm flattered by your words :) Especially when I write a walkthrough, I do my best to fully understand a game and provide the 'best' solution.

I'll have to go back to level 6 and find the easter egg so I can add it to the walkthrough!

Jump to the platform above the start and go to the right end. And jump off it to fall behind the platform.

[Thanks cams! Adding it to the walkthrough now :) -Kyh]

Funky. I do like games that make you reinterpret projected 3D (such as isometric 3D) as just the 2D canvas. I think I've played a couple of other games that did it a bit better (can't find the links now), but nonetheless, this is good fun. 4/5.