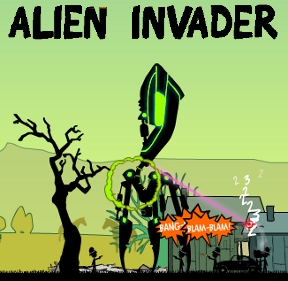 Though packed with lasers, destructive action, and havoc-wreaking upgrades, Alien Invader is actually a tender love story about two alien colossi. You know the old story. Boy and girl fall to Earth. Girl gets abducted by the government. (... or maybe it's boy? I can't tell.) Boy (or girl!) sets out on an enormous rampage to save them. It's enough to make you go d'aaaawwww, if they weren't currently searing the flesh from your bones. Hey, those are the flames of passion, buddy!

Use the [WASD] or [arrow] keys to move around, and the mouse to aim and shoot. The bar at the bottom left is how hot your weapon is getting (so let it cool down periodically or you won't be able to fire), while the one next to it represents your remaining health. The goal is to cause as much destruction as you can on each level by using your lazorz to burninate all the hapless people and the environment, without succumbing to the increasingly more vicious efforts of the military to put you out of commission. Causing damage earns you cash, which you can use to purchase upgrades between levels. While it lacks the depth and variety of upgrades to really make it a classic, Alien Invader's stylish design and aieeeeee, arrrrrgh, blam blam BOOM gameplay makes it the perfect choice for those of us who need a little bit of a rampage in their day.

What a dull game. You don't even get to appreciate the pretty background art because it's just a case of "walk right, click stuff" and carefully watch the ground for the people with hats or guns. I can't see why anyone would play this.