A spaceship filled with traveling orbs has crashed on a strange planet. The crates holding its living passengers have been scattered across the world, and as the lone captain, it's your job to find them all. Ballville: The Beginning is a matching action puzzle game that emphasizes characters, unlockables, and action over tile swapping, creating an experience rich in variety that will keep you interested level after level just to see what strange new things you'll uncover. 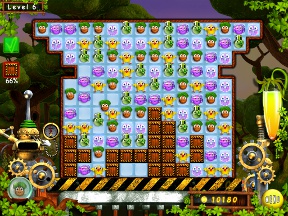 Sentient orbs need homes too, you know, and in Ballville, this is your central task. The overworld map is littered with crates, television screens, and other objects you can eventually interact with. As you complete levels, you construct a new city on this uncharted planet, one building at a time. Unlocking structures rewards you with new orb types as well as other bonuses, some of which are just for fun!

Here's the meat of the game: orbs have special abilities. Of the first few stock orbs, for example, the yellow bird can move on its own, often swapping with tiles and making matches on its own. Hint orbs show you another match on the screen, and DJ orbs sing and break blocks on the grid. Soon, you'll gain access to wood orbs that can clear any block on the screen, and electric orbs that can power certain devices. The list goes on, with almost two dozen orbs to find, collect, and use in the game. Not only is unlocking and collecting game-changing orbs fun, but learning how to use them in "battle" is a challenge unto itself.

Before each level begins, you'll get a preview of the oddly shaped board to see what obstacles await you. Will there be crates to clear out? Gold tiles to form matches over? Tight passageways you have to clear? Look at the layout and choose which orbs to bring into the stage from the inventory at the bottom of the screen. Then, head in and do some serious matching.

Making itself friendly to all ages, Ballville allows you to choose between timed and untimed modes. The former offers you a cash bonus, while the latter is for more casual players who just want to kick back, make some matches, and see what kind of chaos they can unleash. 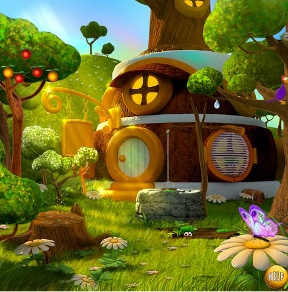 Analysis: Match-3 games have been around the block a few times, and it's always great to see a development studio try something a little bit different. Ballville features a number of smart design decisions that make it a competent matching game as well as a unique diversion from the norm.

Perhaps the most entertaining chunks of Ballville are the interactive hidden object scenes. Before you unlock a new orb type, you've got to find a host of them stashed around an area. They're rarely visible, though, and you have to poke and prod objects to coax them into showing their faces.

One mechanic most matching games ignore is the ability to set up chain reactions, leaving titles like Zookeeper holding the torch. When you make a match, most games lock the ability to swap tiles until everything has settled down. In Ballville, though, your swapping is limited only to how fast you can spot matches. Flip some orbs, flip some more, and cause some serious commotion on the screen.

Ballville isn't the most challenging game, as the orbs' abilities tend to overshadow any sort of difficulty you might encounter. Sometimes, the levels seem to play themselves as you watch match after match play out while you sit back and watch the screen clear itself. Don't walk into this game with the expectation of getting a mental workout. Do walk into it with the intention of having an exciting match-3 experience.

It is an awesome, charming game! I can't say enough good about it.
The developers put a lot of love and thought into its creation. It's a very charming and refreshing welcome to the Match3 genre.

This game is borderline atrocious. I wasted a freebie credit on this thing and I still feel a little robbed.

The mechanics of the game are really screwed up. When making a double match - that is up and down AND side to side - the game only sees the horizontal one. Say what?? So even though I matched three vertically you're only going to remove the horizontal row? What if I needed the vertical one? Dummies.

And why don't things fall DOWN in this game? You can't plan any moves in advance because you never know where the parts will land once movement is done. I've seen three balls stacked up: 1, 2, 3; and removed the bottom #3 piece only to see the top #1 drop off to the side then slide down into the #3 spot. All the while the ball in the #2 position never moved.

There are 22 different balls in this game all with different "special powers". What sense does it make to have several balls the same color? Three whites? Two yellows, two light blues, two orange... and on and on. It makes it dang hard to tell 'em apart when you're trying to match 'em up on the various backgrounds.

And the special powers of the various balls? Most of the time they're just annoying and getting in the way. The game knows a couple seconds in advance when a move is underway so I'm trying to make a match but can't move the ball I want because some special power will be invoked shortly. Never mind if I needed to make that match or if the game just screwed things up for me again.

Overall this would perhaps be a fun game for the very young as there isn't really any difficulty to it, not to mention no plotline or story to speak of. But the technical gaps and glitches make it more irritating than anything.

Are you sure this isn't a rough draft of a game yet to be released?