Sometimes you just feel like clobbering some demons. But swords are so Middle Ages, and axes are cool, but make such a mess, so you decide to try a bow for a change. And then you're off to rid the world of some underworld overlords in Barons Gate, an action RPG by Dragosha Games. On your heroic journey, you'll use the [arrow] keys to move, left click to pick up items and shoot, and [E] and [Q] to switch between weapons. 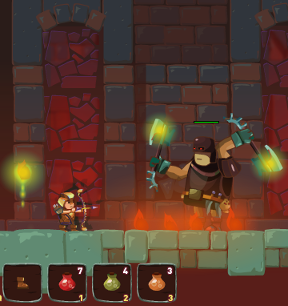 Each time you finish a stage, you'll be brought back to the camp, where you can buy everything from better bows to potions and armour. Money is obtained by killing bad guys and opening chests, but you'll have to wait a good while before being able to buy the ultimate demon-defeating bling. Using the bow might actually take some getting used to – as easy as it is to just point and shoot, most enemies will still take more damage if you aim for the head. Also, switches that open doors or move platforms are often out of the little hero's reach, so he'll have to shoot at them. This can gets tricky, since some of them are actually off-screen, so you'll have to aim carefully: the farther your cursor is from the hero, the stronger and higher the arrow will fly. But worry not, this is the only gameplay aspect which isn't completely straightforward; everything else plays like a good old hack-and-slash or, in this case, shoot-and-shoot-some-more.

Barons Gate isn't perfect, so it's possible to come across a glitch or two. This is especially true of enemies, who can get uncomfortably stuck to a wall or between boxes. But, ghouls' aversion to architecture aside, the mechanics tend to do what it says on the tin. As for the graphics, the game looks very pretty indeed. Each level has its own striking palette of background colours, which add vibrancy to the otherwise sombre dungeons. The levels are populated with a decent number of different enemies, though they won't pose a huge challenge in the normal difficulty. Heroic mode is a different story, with ever-spawning baddies as far as the eye can see, which can get a tad overwhelming. But Barons Gate is addictive enough to make you want to press on, so shine your helmet, sharpen your arrows and show 'em who's boss.

For some reason, it really didn't like my trackpad. I'm running a win7 toshiba with intel i3, if that helps at all. It would only recognize my mouse movement if I moved it very slowly and didn't do anything else at the same time--jumping, walking, etc.

One minor flaw I can see with this game is that you can't sell old equipment to the stores, only buy them--and considering that dropped equipment is persistant, that can be a bit of a problem, especially in the hub camp.

Behind some obvious crates in the camp, there's a door marked "Don't open". Inside that room, there's a guy who can easily be killed the first time you reach there, even if you can't yet kill the monsters which come just after you kill him. He drops a key which if you're quick can be used to open a chest with ~1000 gold and a pretty nice mask. The fact that you'll probably die is no problem, because you get to keep the gold (and the mask). In a couple minutes doing this, you'll have enough to buy all the best gear the shops have.

It's a little broken, but I guess the best equipment is supposed to be found elsewhere anyway.

That mask is creepy though.

Could someone help with the Purple Cave, please? I feel like I'm missing something super obvious.

In the entrance screen, how do you get up to the level of the purple sorcerors?

Never mind, I got it. Why are we pixel hunting in an action game???

Ok, this item inventory thing is officially mud. I lost 2 rare weapons because there was a treasure chest in the middle of a battle, which got opened, and I was killed before I could switch it back out. I ended up with two worthless "weapons", and no way to kill the enemies on this floor.

Who does this? Why have both keyboard and mouse if both attack and pickup are a one-button function? This is beyond annoying. This is unplayable.

Re:- purple cave, if you know how to get to those higher platforms, do share?

I gave up there.

Darn, I knew my hint about shooting off-screen was too subtle! :P
For the moving platform in the purple cave, you have to

go to the beginning of the level, climb on the barrel/crate, then shoot at a low angle towards the second lever (which you can't see) until you hit it. It's a bit of a pain, but shouldn't take too long to get it.

Another way to hit that switch is to move the mouse closer to the player, so the arrows fire with less force. That lets you stand in the area below it and fire in an arc that hits the switch on the way down.

I was really having fun with this game up until Heroic Red. When I respawn at a checkpoint, platforms that were destroyed remain destroyed, making it literally impossible to proceed without restarting the level. If you haven't played Heroic Red, know that the main challenge is trying to get to the next area before the platforms you need to do so are destroyed.

reached fire passage (eventually), got to a point where there's a jump too big to make and those purple witches that throw green fireballs who just keep constantly respawning.
There is a switch that you can't jump up to and if you try to shoot it you can't because the closest clear shot is WAY off screen.
My guess is it opens one of those half bridge logs.

If you want to live a long time, go in the "Don't enter" door and kill that guy and grab the head.
It's a serious power up ;-)

For those who can't get though 'impossible jumps'...

a) The Rush potion (which gives you higher and longer jumps) is your friend.
b) The Speed potion is also your friend.
c) Unlike the real world, mixing medications is even more your friend.
d) On the top floor of the camp is a potion vendor, where you can buy lots of friends.

And past that vendor are some breakables that hide the chest that goes with the key you get by the Don't Open door.

That said, I agree that Heroic Red is a problem--those platforms need to reset when you die, right along with the enemies.

They reeeally need to explain the shot power mechanic, it took me way to long to figure out that closer clicks = weaker shots.