No one ever said being a bandit was easy. Especially not a righteous This impressively creative game from Simogo (Bumpy Road, Beat Sneak Bandit!

Kosmo Spin) combines the most basic musical elements with a visually sparse but stunning art style. The gameplay is different from just about every other iOS game out there, and you'll absolutely fall in love with it from the very first level!

So, how exactly does a stealth rhythm game work? Very much like a one button game, in the case of Beat Sneak Bandit. Each of level has a thumping back beat you can easily capture with your ears. If you can't, an icon at the top of the screen visually nudges you along. To move, simply tap along with the beat. By timing your moves right, you can sneak around the mansion, turn yourself around, climb stairs and avoid traps. It's easy to get the hang of, but mastering it is another story entirely. 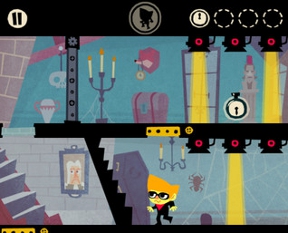 Not only do you have to move with the beat, the obstacles and enemies change in time with the music as well. They may follow different patterns, but everything is thumping along to the same track, making it easy to predict the best time to move. This also adds a bit of strategy to the mix, in that your character can only turn around when he bumps into a wall. Some walls retract on certain beats, so if you want to turn around, you'll have to start your run at precisely the right time!

Beat Sneak Bandit adds another layer of challenge by spreading clocks throughout each level. You can gather as many of these as you like (or, as many as you are able to), the more the merrier. Completing the level only requires you find the "exit" clock, and if you fail too many times, you're given the option of skipping the stage for the time being. This opens up the wide world of "going back to replay levels so you can get a perfect score", which is a fantastic bit of fun in this wacky game. 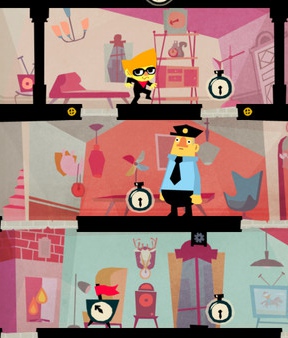 Analysis: So this whole "tap along with the beat" business makes this iOS game a bit on the easy side, right? Oh, no no no no! In fact, Beat Sneak Bandit's difficulty is rather unique in the gaming world. Instead of juggling multiple tasks, puzzling out puzzles, or trying to make pixel-perfect moves, you're tasked with keeping a beat in the front of your mind while monitoring a number of obstacles at the same time. Even though everything is dancing to the beat, you can't just tango your way through to the end.

Downsides? Drawbacks? Gameplay omissions or programming snafus? Never! Beat Sneak Bandit is beautifully tuned to meet and exceed your highest gaming expectations. It's simple to play but difficult to master. There's as much or as little challenge as you like, depending on how thorough you want to be. The visuals are crisp, clear, modern and vivid. And the music somehow manages to emulate various styles while retaining its simple, easy to follow background beat. Beat Sneak Bandit never trips on its own design!

A wonderful iOS game no matter your genre preference or l337 ski11z at gaming. Even if you don't consider traditional music games to be your thing, Beat Sneak Bandit is almost worth getting an iOS device just so you can play it!