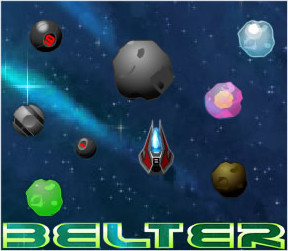 Arguably one of the greatest video games of all time, and certainly one of the classics, Asteroids was released to the arcades by Atari in 1979. Twenty-five years later the game is still captivating gamers with its gameplay and its physics.

But Belter is better.

From creator Russ Duckworth's Truantduck Games comes this Flash Asteroids clone that offers the same gameplay as the original, yet in glorious full-color with lots of new roids, 99 levels, boss stages, and high score lists.

Belter one-ups the granddaddy of vector-based video games by featuring an eye-pleasing interface, a variety of colorful backgrounds, and some highly entertaining asteroids to shoot into smithereens. Now there are dark matter roids, droid roids, ice roids, time bomb roids, gas roids, smart roids and, of course, asteroids. Each one differs in mass and in behavior, and when hit with your laser cannon, each has its own point value.

Use the left and right arrow keys for controlling rotation of the space craft, up and down arrow keys for forward and reverse. Two difficulty levels offer game play for novice or expert gamers. There is even a wireframe mode for the video game purists.

The game is beautiful and breathes new life into a classic game formula that has been around for a very long time. The in-game sound is minimal and leaves some to be desired, yet doesn't detract from the overall enjoyment of reliving one of the greatest games of all time.

also a very fun game, although some levels are extra ignorent!!! lol

Hey DB - please explain how you mean that some levels are ignorant? And are you playing on novice or expert mode? Actually, knowing how good you are with games, that's probably a dumb question. =)

lol sorry for being vauge, but when a level is all bombs or a bunch of bomb creators, and such, it just makes me shake my head

things should also crash into eachother, make it a bit more realistic, without the whole game being 3 d

I found a neat glitch! I got 3 power-ups at once when I detonated a mine near a normal asteroid. They included the green dot and the black '+' on yellow. I think the combination of those 2 caused the effect. It was only my first laser boost, but I could shoot at top speed, like the '+' makes you do for a few seconds. I had to fire in smallish bursts, though. It carried over between stages, but went away when I got another laser boost.

does any one know how to get to upper levels, without re-playing from the begining?

and how do you get power ups on a regular basis
played all the way to level 20 without any green laser power ups!

any help would be great.
thx

Yeah, is there a way to start at a certain level instead of always from the very beginning?

Trick. If you get the item that sends your ship spinning in circles spraying lasers everwhere, Lets call it the "Death Blossom", if you fly your ship through the death blossom fast enough and end up collecting a green power up while you are spinning and firing in a circle, your guns will be automatically maxed out. It will however revert back to the approprate level the next time you get a green power up. SO DON'T grab em once you do this trick. It works 9 out of 10 times.

Hi there, nice to read your comments. I have got to level 41 and know now it is 99 levels. Thanks for the tips I will try them and finally make it through all levels. Good luck to you all.