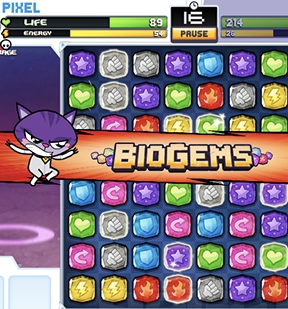 You wouldn't think it, but cute animals face a lot of peril in Flash games. Sometimes they're under suicidal pressure from humans. Other times, like in Biogems from Mochi Games, adorable little creatures are locked in some kind of internecine conflict... in space. And it's going to take all your match-3, turn-based battling skills to defend your puppy, kitty or bunny against bears, snakes, and bugs. All of which are also pretty cute, to be honest, but they're the designated villains here.

The match-3-as-battle method has really come into its own lately, and Biogems takes it a little bit further in terms of strategy. Both you and the dueled enemy use the same board to make your matches, so in addition to considering what the best combination is for you, you also want to avoid giving your opponent opportunities. You click on a gem and then click on another adjacent gem to swap it. Some gems attack, others heal, restore energy, up defense, load a counterattack, or fill your rage meter. Once your rage meter is fully charged, you unleash an extra powerful attack. Any row of 3 or more grants you some attack or benefit, 4 or more gives you an extra turn, and 5 or more gives you a rainbow gem, which you can swap with any adjacent gem to claim all gems of that type on the board. Some gems have shiny, metallic borders, and making chains with those gems grants you extra rubies, which you use between matches to upgrade your character. 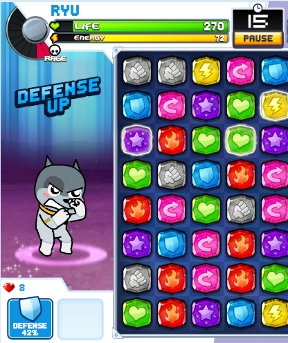 Analysis: In addition to the strategic consideration of your opponent's next turn, the ability to shield or load a counterattack adds an additional dimension for the budding Sun Tzu of gem-swapping. If you're fully shielded and have a counterattack ready, your opponent's attack can actually be turned against him without you taking any damage. However, if your opponent doesn't attack, the shield and counterattack go away when your turn begins again, thus making it a wasted effort. Luck plays a large part in the game, as it does in any match-3 game, but it requires a keen eye to grab those lucky opportunities while the timer is counting down. The AI of the opponent is on the dim side and it's often possible to predict that he will go for the three special attack gems rather than the five energy gems.

You proceed from opponent to opponent until you reach the final boss. You can use MochiCoins to buy rubies to upgrade yourself, but that really isn't necessary, as you get to keep any rubies you earn in a lost match, and you can play previous opponents for even more rubies if you want to. This makes the game's microtransactions more of a shortcut cheat for impatient players than something that the game feels incomplete without. The high energy electronic soundtrack and effects keep you pumped up even through a few defeats, anyway. The only mystery is why these cuddly astro-pets feel the need to wail on each other anyway. If snuggly little kittens can't get along with giant squids, is there hope for the rest of us?

Nice! I've recently become a fan of this genre and this is one of the better choices--not just because of the strategy, but because I dig the characters, too.

While there is a lot of luck involved in what might fall to give your opponent multiple combos (I was destroyed by a lucky 8X combo in the second game), I found one really valuable strategy as I leveled up:

When your opponent begins to get close to maxing out on rage, try to increase healing and always end with a counter attack in your dock.

I was able to kill the shark with that strategy and it felt good. Yep. There was celebrating going on.

This is a great looking game that polishes a solid concept, and while it's pretty fun for most of the run it's essentially unbeatable without a huge helping of luck on the final fight. The reason is that there's no way to boost how much you can heal yourself over the course of the game - no purchasable item boosts healing volume, and it sticks at the same amount the entire game even as your maximum health increases as necessary to last against increasingly tougher opponents. That means it's a core part of your strategy until the last few fights, which is usually the sign of a crafty game. However, since you can't really heal, and even with maximum health you die after only a few undefended hits at the top levels, you're stuck constantly defending and praying that a combo or 4-/5-of-a-kind comes your way. Your ability to plan for your next turn is severely limited by the fact that the opponent plays off the same board as you.

There are some clever strategies you can pull, like setting yourself up with a defend+counter and creating an unmissable magic attack opportunity for your opponent, or clearing out the energy restores and rope-a-doping him. But when these advanced strategies require more stars aligning than a 5-of-a-kind mega-attack, you're kind of stuck with your fingers crossed until you just give up.

I really enjoy this game for some reason. I noticed a little oddity...

If you knock your opponent's HP to zero with an attack while their counterattack is active, they'll counterattack before dying. Thus, it's theoretically possible for both opponents to KO one another at the same time. I wondered what would actually happened if both protagonist and antagonist hit zero simultaneously, and against the final boss I found out when I zeroed it and it zeroed me with its counter.

The match was declared in my favor anyways. No draws.

There's another combination worth mentioning here. If you get an L-shaped match like this:

A bomb appears at the intersection. It goes off when the chain reaction finishes, blowing up everything in a 3x3 area, and you get the benefits of every gem it destroys.

The final boss is TOUGH. Like real tough. His damage is just ridiculous to the point that you have better luck luring him to attack you when you're def/countering than bother attacking him. I was able to reach all the way to the 2nd to last dying like twice. By the time I finished, I had upgraded all my things from lvl 2-3 to almost max.

Another thing that annoyed me is that there are times where it was a good tactic to just time out and wait for him to take something, so that you could combo or get a new board, etc. That and how bad the ai is at times. It was a blessing for the final boss, but still. I just left a 5 in a row for 2 turns and he didn't bother getting it. It was a lure as I had counter but still. Often he'll choose a group with possibility for a 4 combo... but use it in a way to only get a 3.

Anyway, I still enjoyed it and the music and animation were very polished though it got a bit repetitive at the end.

I'm getting nothing but a loading error. I even went to the Mochi Games site and tried it from there; it told me I needed Flash so I installed it and still nothing.

[What sort of loading error? What version of Flash do you have installed? What OS and browser versions are you using? If you'll leave more details, I can try to reproduce the issue you're seeing. The game is loading just fine in my OS, browser and Flash Player versions. -Jay]

I'm getting a little bug with the final boss, actually. I reduced him to zero HP, but he didn't go down. Then he used some healing blocks and beat me, and I haven't been able to get him down to zero since, due to how much luck I didn't have. How frustrating!

Weird, the game's not loading for me all of a sudden. It just goes transparent, nothing more.

[I'm not getting the same thing. What browser are you using? Try emptying your browser cache and reloading the page. -Jay]

@justin - That's not a bug. The final boss regenerates himself once and gets tougher. The second time you put him down, he'll stay down.

The best strategy I found for him and all the later guys was to have defense up constantly, if at all possible, and just be patient about doing damage yourself. Even a Rage attack practically bounces off you if you have shields active.

I love this game.

The graphics are really well done. I like how the characters have different moves when they attack. I especially like the Bunny's special attack (purple gems).

There is luck involved, but there is a degree of planning. Make sure to get defense (blue gems) if your opponent is getting ready to Rage.

I suspect the computer is designed not to take the best gem combo and go for the most aggressive one. Otherwise, you'd be crushed.

I think that the appeal of this game is like playing a slot machine, but with skill involved.