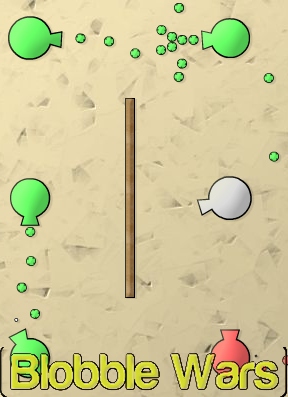 It's a lesson you learn very early on, the first time someone gives you a crayon: if you can make things green, suddenly everything ought to be green. So if Blobble Wars, the new addictive action game with a dash of strategy from J. Appleyard, gives you a green blobble spitting tower, then red, yellow, blue and grey towers better watch their backs, yo.

You start each level with a single green tower. All the other towers on the field are shockingly lacking in greenness. This must end. By using the mouse, you click on your tower and drag to aim at a non-green tower. Hit it with enough of your projectile blobbles, and it will turn green! Unfortunately, the other colored towers on the field do not appreciate this and will try lobbing their own blobbles. In order to win the day, you'll have to strategize and make a plan of attack to control the field, using your captured towers in harmony with each other. If the battle isn't going your way, hit [r] to restart.

Although the mouse-dragging works well enough to beat all 20 levels even on hard, it seems a little unnecessary. You're only going to be aiming at targets, so it would make for a much simpler interface if you could just click on a tower and then click on a target for the tower to attack. Just like a real melee fight, there's a certain amount of randomness once you start doing 1v1v1 and 1v1v1v1 levels. If the other colors gang up on you, you're toast. However, it's not as random as you might think. You can manipulate the AI to a certain extent because basically whenever you aim at a tower, that tower will turn to aim back at you. I rescue towers in trouble by taking a secure tower and waving its line of fire over the enemy towers, which then turn away from the weak tower and start firing at the strong one.

Colorblind players will be pleased to know that Blobble Wars has a colorblind mode in options. With four difficulty levels, Blobble Wars can accommodate any level of skill, and its twenty levels should provide a decent amount of playing time for any blobble-spitting fan.

Apparently 'hard' level simply means your turrets will stop firing midway through battles, and that when you capture a new turret you have to wait 10 seconds before it fires, even if it's clearly dark green.

This game looks fun but it keeps lagging up for me. I have a reasonably fast computer so this shouldn't be an issue. Does anyone else have this problem?

I love it...
It can use an upgrade system and a general speed up, but it's challenging and fun

Fantastic game, the overall idea of it is a bit overused, but it is executed very well.

Looks interesting, but I have an extreme terrible framerate and constant hangs, altough I set quality already to low.

The game introduces sniper tower, but then seldom use it. And it is just a tower that shoot fast bullets, even though these bullets does not have enough accuracy to become a sniper. So why would it exist?

Also, I would want some more special towers (or something like big bullet which can change a tower to dark green at once), rather than a level full of towers.

Lastly, More levels please. Using this kind of interface I think a random battlefield generating function is possible. Well, if the author can make it.

[Reason: Chrome is multi-threaded. Firefox won't be multi-threaded until version 4 hits, which just went into beta testing so it should be within a few months. -Jay]

Agh, mochiads won't let me play, and I have enough stuff on my computer. It already lags up for ten minutes at a time... I don't need any more of that.

[If your computer lags for up to 10 minutes at a time then you have a serious virus infestation and you should reformat your hard drive then reinstall Windows at your earliest convenience. -Jay]

It's a fun game to pass some time - but I'd rate it only a 3. The game doesn't lag for me but is PAINFULLY slow. Seeing the bullets drift across the screen is a chore. And it could afford to look a little better

"You're only going to be aiming at targets"

There's a lot more to this game that you are missing, it seems. defensive spreads between turrets are key.

Yeah, instead of making the comp's rate of fire slightly higher or making their bullets do slightly more damage, they turn off your cannon randomly in the middle of battle. WTF. Lazy, lazy, lazy programming. "How about in a FPS, we'll make the gun jam half the time! Won't that be fun?"

Just in case anyone else didn't notice the fast-forward buttons on the lower left. On the fastest screen >>>, it was still slow, but not as painfully slow as the normal level. I had to remember to set the fast speed on every level, but that wasn't difficult since it took several seconds for the first blob to appear on the normal level.

I played the Easy level, and it was fun, just difficult enough. I think if the game was faster, I wouldn't mind playing a harder version.

I actually thing the drag-to-aim mechanic works quite well, as cannons will stop firing for a few seconds when they're hit - this means if you have a bunch of cannons firing at a key point that you own, you can have another cannon sweep them a la suppressive fire.

I really love this game's concept! One of the very, very few 5 stars I gave here :P

I agree the dragging doesn't seem necessary. And the only reason I'm not playing anymore is because I've finished it up and I'm not interested in playing it again in a harder setting. But a multiplayer feature would definitely be nice! :)

I love this game! I really really think it needs a multiplayer mode. I could imagine playing this at a LAN with 4 or 6 of my mates on a really big map.