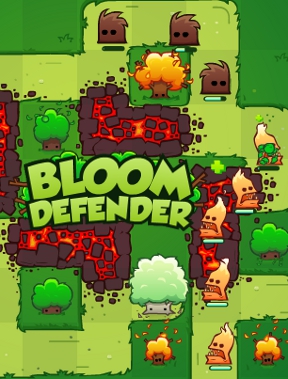 The Mother Tree is under attack from corrupted spirits and it's your job to tend the garden and weed out the baddies in Bloom Defender, this light-hearted tower defense game from the Juicy Beast team. Plant trees based on their different specific powers in strategic locations along the enemy's path or call upon your own mastery of the elements to fight off wave after wave of spirits and restore peace to the grove.

As you progress through the levels a variety of different defensive trees will be unlocked, each with their own unique ability. Drag flowers to open spots of land to plant a tree, using the surrounding terrain to provide hints of which enemies are coming and which tree might work best. As the appointed guardian of the Mother Tree, you can also get in on the action yourself when the fighting starts by clicking on intruders to unleash the fury of the elements upon them in the form of powerful spells. Each enemy is vulnerable to a different spell, and you can use the number keys to quickly switch between them in the heat of battle. As each corrupted spirit is cleansed, they rejoin the natural order and become energy that can be used to plant new trees or buff up existing ones to bigger and stronger forms. Between rounds, the Uproot Mode button at the top of the screen allows you to re-evaluate your defenses and retrieve a small amount of energy from any trees you'd like to remove. Keep track of how much energy you have to spend at the top right of the screen.

Get Bloom Defender for your mobile device! Read our review of the mobile version.

Bloom Defender has polished and casual, simple to understand gameplay along with more action than most games of its genre and a difficulty curve that ramps up just enough to keep things enjoyable and never boring. Plus, it offers mind-numbingly cute graphics, too!

This is probably the most balanced tower defence game I've ever played - every tree and every ability felt like it had its own niche. It looked lovely and it played lovely, too.

The snikoya has me confused. I don't see the damage going up at all. Does it get stronger after every shot, or does it mean the longer the range the more damage it does?

According to the developer, the damage will increase the more it hits the same target. Once it switches to a new enemy, damage resets.

One of the few tower defense games I actually like... :D

Wow, one of the very few tower defense games where I bothered to make it to the end of the game and nab every perfect gold medal along the way. Great graphics and just "something" that made it really fun to play :D :D

13,176 Views
5 Comments
chrpa— Jayisgames needs your help to continue providing quality content. Click for details Masa's games have a simple and clean graphics, and perfectly logic puzzles. The hints are absolutely clear and the only thing which you need is your brain and...  ...

4,351 Views
2 Comments
chrpa— Jayisgames needs your help to continue providing quality content. Click for details Notice, that this week will not be posted Weekday Puzzle. Instead, we have two perfect escapes - this one, and on Friday I'll post another one. Clay games...  ...