Nitrome's back, ladies and gentlemen! The ever-awesome studio has another competitive arena game that's every bit as fun, challenging and stylish as you'd expect from such expert craftsmen. Enter Bump Battle Royale, an addictive little bumper cars game featuring a slew of Nitrome's best characters and locations. Nitrome has always been a master at taking a simple gaming concept and developing it in creative ways, and Bump Battle Royale is no different. There's only one button, the [A] key, which you press to launch your spinning little soldier across each creative map, knocking and dodging your opponents and collecting power-ups to increase your speed and strength. The aim is to knock your opponent off the map before they do the same to you... without falling off yourself. Play solo or in multiplayer with up to four friends in a variety of gameplay modes, including Campaign, Last Man Standing, or Team Battle, unlocking new levels and characters as you go. Is there anything Nitrome can't do? 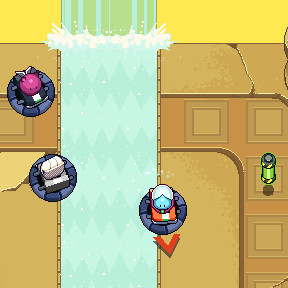 The name of the game here is "easy to learn, hard to master". Your bumper man spins quickly, meaning your reflexes and aim have to be up to snuff if you don't want to launch your guy like a little cruise missile over the edge. It's extremely satisfying dodging out of the way just before an opponent rams you off the map, though as with many Nitrome games the steep difficulty curve can have you pulling your hair out even as you reload the level for tenth time. Enemies start to gang up on you in the later levels, keeping everything fresh and chaotic. Plot out each stratagem or plow wildly into the mass and hope for the best, the game will reward either option when you least expect it. Nitrome's production values are as stellar as ever here. Any gamer in the 90's would have been overjoyed to have one of these games on their SNES, but luckily for us, in this magical age of digital connectivity, we get the whole slate of games for only the cost of an internet connection. So go and support one of the best studios on the web. You'll have a blast doing it.

I give this game a ragequit/10.

There was a slight issue I had in multiplayer mode: switching players would cause the previously registered players to be remembered, but it seems to be resolved now.

I feel like a little bit of luck is needed for predicting the spawning of the capsules - at times, they'll spawn right on top of another player when you're in the middle of a jam. Other times, you won't be in the right position to drive into one, but your opponents are.

Great commentary too, though it started to get distracting for me in later levels - and hearing "You lose!" while getting the hang of the timing of the controls was degrading. Strangely enough, I'm still leaving the commentary on because his "pew pew pew" is priceless.