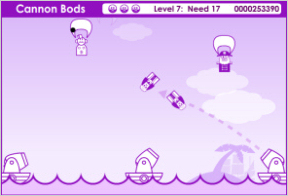 Where pirates and circus acts collide comes this excellent flash game from Off The Wrist. Cannon Bods is a slick little action game where you must shoot falling pirates before they hit the water. Be sure to choose the target that matches the pirate "ammo" loaded in your cannon, then aim and fire with the mouse. If the 'cannon bod' doesn't match your intended target, it will miss it completely.

You can rack up multiple ricochet hits for bonus points and occasionally blast the annoying Polly out of sky as well. As you progress in levels the difficulty rises with not just more and more varied targets, but by adding more cannons to fire from and eventually moving cannons as well.

An authentic rendition of Sweet Georgia Brown and cheery sound effects round out the beautiful artwork, which my co-worker watching as I played said reminded him of "Terrance and Phillip" from South Park. Despite that resemblance the game is 100% clean and safe for work and children alike.

Analysis: The controls are easy and intuitive, and a nice touch is that as you hold down the mouse button for more power the trajectory line changes its shape to match your cannon's increased power, giving you an accurate look at exactly where your "ammo" will go.

I played Cannon Bods for quite a while, but I had to in order to get to the really challenging portion of the game. It's only real problem is that it takes way too long to ramp up in difficulty, so the first few levels can be too easy and too boring. Those go by quickly though, and the added difficulty of firing from multiple moving cannons makes the game satisfyingly tense and enjoyable.

Take a few minutes out of your day and go play Cannon Bods.

Cheers to Mark for sending this one in!

I found out that quite a few times my cannon pirate was going through a lot of the falling pirates, that got really annoying.

Arrr! If the cannon bods go right through the falling pirates, then you've fired at the wrong pirate, matey! Arrr. ;)

It seems the only reason the pirate goes through others is when it doesn't match what you're aiming at. I had no problems at all playing. Love the music and the monochromatic color scheme. Highly recommend this great game.
kb

Yes, apologies for being a bit too clever with my explanation in the review. Match the ammo to the pirate target. I've been playing it all week so I forgot that I had to check the rules the first time I played, too!

Ohhh I missed that part of the instructions :P

the ONLY complaint that i could harbor against this game (get ready, this is a weird one) is the fact that the game is purple... for whatever weird reason, this game just screams plain black/white to me, but instead they made it purple... otherwise, this is a great game! the simple character design and comedic action make this a fun little thing to play.

Oye. It's a fun game with good graphics, but it seems to get stale fast. Oh well.

Sorry I haven't been here in... like 6 months or something(?) I was a bit too busy having my house burn down and all, so this isn't my computer. I tried logging onto the chat, but it just says "ERROR: Java runtime thingy can not be loaded." If anyone knows a solution to this, please tell me as opposed to sitting and laughing wildly at your screen. Thanks -MANAX.

I'm obviously the only one who had this issue, but the game is so cute and the colors are so nice, but I had the hardest time telling the pirates apart when they were in the cannon! Also, it would have been nice to be able to earn a life back, unless you can and I missed that part. Otherwise I really like the game, and will surely be tormented by it.

took me to level 3 to relize that you can only hit the ones falling by shooting the same person at them. lol

I've been playing this every day since it was posted. Good fun game, very slick.