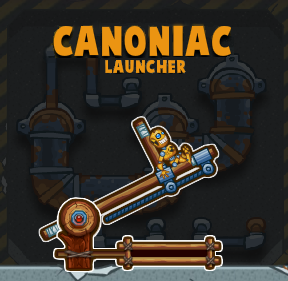 It never hurts to have a dream. Unless, of course, your dream is to be repeatedly launched into the air, crashing into various boosters and blockers, so as to earn money for the purchasing of upgrades. That might end up hurting quite a bit. But hey, who are we to deny Robot Jimmy his ambition? Canoniac Launcher is a new action launch game that is a robo-riffic blast. The game's clear inspiration is Toss The Turtle (and, by extension, perhaps the very first launch game, Pingu Throw), and while there are some areas in which it polishes the Toss the Turtle formula, other parts could stand some improvement.

It's an interesting twist that forward distance earns cash, but vertical distance triggers the ending cut-scene, this should have been made clearer in-game. Also the upgrade system is fairly unbalanced, with store cost often having little correlation to the item's in-game usefulness. Finally, Caoniac Launcher is over-generous with the forward momentum... Round about the midpoint of the game, you could probably launch Jimmy, go get a bowl of cereal, and return before he's finally come to a rest. There is thankfully a "stop" button to immediately end the launch, even it goes against every casual gamer instinct to give up free upgrade money. Don't let these caveats turn you away, though: the presentation is solid, the music is excellent, and the artwork is gorgeous, specifically all the various poses Jimmy takes as he flies through the air. There might not have been a good reason that he was programmed to feel pain, but it makes for some absolutely hilarious moments.

Every time.. the flying robot catches me in mid air. Every time.

You too Diego? I'd really like to love this game, but I can't. When there's far more luck involved to depend on in what's supposed to be a skill game and more items out there hinder than help you, I know I'd be frustrated even if I had all the upgrades. I thought in games like this the challenge or 'opponent' was yourself, not a random generator. With just a few tweaks this could be a fantastic game.

Also, can anybody make sense of the bonuses/awards? What does Eagle mean?

reminds me a lot of burrito bison but not as good. kindof fun but it really irked me that after playing for, well, way too long and purchasing every available upgrade and winning all but two achievements, there were still several locked upgrades. As a compulsive upgrade completer I was miffed and quit.

yeah.. i'd like to like this game! it's just missing a few tweaks here and there (randomly generated gameplay is tricky)

Guess I should have read the review. Glad I accidentally got the end scene, because I would have been going for distance until tomorrow. They definitely need to make that clearer to the audience.

anyone figured out how to get the locked items unlocked?

Neo1973 : To have the unlocked items you'll have to register at Funbun and play directly from there.
I did that but seems we have to start all over again...still wondering if there's a way to get all the stuff already earned. The game is fun though but don't feel like going through all once more.

If you want all of the achievements, don't buy the wallbreaker or drill until after you have the reverse distance ones.

The facial expressions make this a fun launch/upgrade game. I

What would make it a lot better:

what is reverse operations i dont know what the drill is for or the negetive operations.do they relate in any way?