Remember Jimmy, the shop mannequin who dreamed of becoming a crash dummy? When we last left him, he'd launched himself so high that he shot into space like a rocket and, after a few asteroid-related mishaps, landed on an alien planet. As it turns out, this world is a dangerous place, but some things stay the same no matter where you go... like cannons. There's always a cannon. And so, Jimmy decides to do what he does best: launch himself into the air, take a few bullets, save up for some upgrades, and flail around ridiculously whenever he smashes into something. It's time for Canoniac Launcher 2, a new action-packed launch title brought to you by FunBunGames. 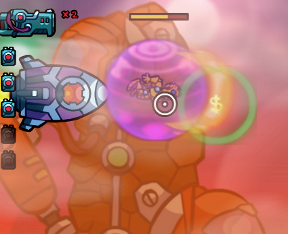 The original Canoniac Launcher was fun, but had some notable flaws. It's always good when a developer is willing to learn from their mistakes, and that seems to be the case here— gone are the unclear ending goals, the excruciatingly expensive upgrades, the unbalanced prices... well, mostly. I stuck with the Tornado a little longer than strictly necessary. Unfortunately, these improvements come at the expense of some of the game's charm. There's nothing wrong with the new, cartoonier art style, but it's a very common look for this type of game... and with more standard play on top of that change, Canoniac Launcher 2 feels more like any old launcher than like the original.

And again, there's nothing really wrong with that. It's still a great diversion, and Jimmy still does all those wonderful flailing motions. Hopefully the developer can strike a better balance between originality and improvement next time, but if you're a fan of launchers, this one comes recommended.

Starts you off with 5 minutes of grinding before you can even buy anything, bad design.

I have a complaint even before the grinding:
it starts you off by imploring you to click the link to Canoniac Launcher, with a button that has blinking arrows. Not once, but twice.

Seems like a cheap trick to generate web traffic, as it misdirects the player from clicking "Play" and "New Game".

And after the grinding, the first upgrades are hardly worth it.

Well, got about 80% of the upgrades and started falling asleep at my desk. Not the most exciting launch title.

A lot like Burrito Bison revenge, but with less action.

It seemed like the luck factor was the biggest part of the game, making grinding for upgrades a real bore. I'd go 10 crappy launches for every good launch.

It's bothersome that I can't benefit from more than one powerup at a time. In particular, getting the powerup that pulls money to me makes me pass through all the powerups that would have extended my flight.

Yep, same here. The launchers aren't great. and I get annoyed when I get alerted to a new item, but its only the launcher upgrade.

I was able to get to the half way mark before I had half the upgrades then got no where near it afterwards. The luck factor is a huge in this game.

One question does the ufo weapon do anything? I don't think it does, and like the double barrel better.

The original was much better (and that's not saying a whole lot in its favor). This version got very tedious, very quickly.

This should be renamed Canoniac Grinder.

I have all the canons, upgrades & weapons and I still haven't even passed the halfway mark. I thought perhaps the grinding at the start might just be a small oversight. I was wrong. This entire game is grind.

Launches start out too weak, prices are too high, income is too low, grinding is the name of the game. What, exactly, was learned from the mistakes of the first game?

The graphics, sounds, controls, thematic conceit, etc., are all on par with the more enjoyable launcher-type games.

I have a hard time believing the game was actually play-tested all the way through, though. If it was ever balanced, I have to imagine that major changes were made afterwards...

In the original game, it really wasn't clear how to win at all, and the value of the upgrades barely had anything to do with their price. The upgrades also were really expensive and grindy. At the time I wrote this review, I felt like this time around winning was clearer, the upgrades generally got better with cost, and there wasn't quite so much grinding.

Of course, after reading all these comments, I'm starting to wonder if I had a run of good luck at the start, and perceived the game to be less grindy than it really was. So, probably my bad here.