Captain Skyro is a classic "pull back and fling" game similar to the old browser series Sling, only instead of tossing around squishy gross things, now you get to control a pirate! Grappling up through the clouds, you'll encounter cargo holds full of crazy obstacles, clouds that you'll swear are out to get you, and score-based gameplay that will inspire you to go back and play again, just so you can nab that last coin! 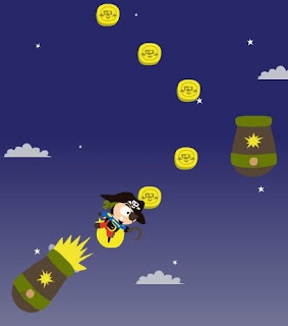 Hovering along in his airborne ship, Captain Skyro turns around to find his crew shouting mutiny. They toss him overboard and leave him to plummet to his doom, but this crafty captain's got a trick up his sleeve. Actually, it's just outside of his sleeve: a hook! With a rope attached to it! Using this piratey device to grab on to wooden pegs sprouting from clouds (yup, that's right), touch, pull, and release to send the captain flying, grabbing successive pegs to gain height.

Nothing is as simple as "climb up to your flying ship using pegs on clouds", and our Captain will encounter plenty of obstacles over the course of this lengthy mobile game. Clouds bursting with lightning, spiny clouds, moving clouds, disappearing clouds, and piranhas are just a small sampling of the dangers waiting to be discovered. On top of that, you can't fall too far before you're caught by a bank of nasty-looking thunderclouds. Fortunately, checkpoints are found throughout the levels, giving you a bit of respite as you work your way to the oasis above! 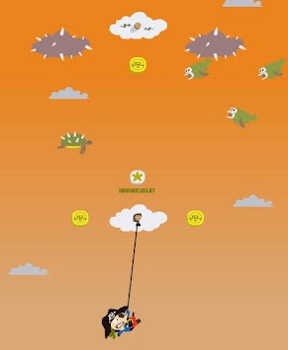 Being a booty-lovin' pirate, Skyro's got more on his mind than getting back to his ship. Scattered throughout the skies are golden coins just waiting to be plucked from their bluey docks. Scoring a respectable score is another lofty goal, and you'll be ranked according to treasure collected, speed, and finishing without dying. In other words, move fast, do everything, and don't mess up!

Analysis: Captain Skyro is one of those mobile games you'll download and keep on your phone for months. It's extraordinarily easy to pick up and play, but getting good at the game takes time. You'll want to get better at it, though, because it's such a well-made game with smart physics, creative obstacles, and bright, cartooney visuals that really highlight the experience.

The only real downside of Captain Skyro isn't the game's fault, it's evolution's. You see, since we haven't developed transparent fingers, you'll find your digits get in the way of the game from time to time, especially when you're trying to fling yourself upwards with a dangerous obstacle moving below. Some creative phone positioning usually does the trick, but c'mon, nature, where's my opaque phalanges already?!

Human physiology aside, it's very difficult to find anything about Captain Skyro that isn't charming, engaging, and utterly perfect. A cheeky story with fun visuals would have been enough to keep us entertained, but Skyro goes on and adds a ton of levels with a crazy variety of things to see, experience, and master. Well done, indeed!