Card City Nights, available for PC, Mac, Linux as well as Android (and soon iOS!), is sort of a weird duck, and I mean that in the best possible way. Created by Ludosity, it's a surreal adventure game spin on a card-collecting battling boardgame set in a funky city where everyone is obsessed with it. And by "everyone", I of course mean hat-wearing platypusses, sentient radishes, school children, and so forth. As the game begins, you've just moved into town, and everyone is excited at the rumour that the Card King is now accepting challengers for a million dollar prize... but you'll need eight one-of-a-kind legendary cards to even be able to take a shot. Unexpectedly strategy enough to captivate fans, it's also casual enough and slow but steady in its pacing to work as a great introduction to the genre for novice players, with an engagingly colourful design that makes it stand out from the pack. Or should I say... deck?! Gotta build 'em all! 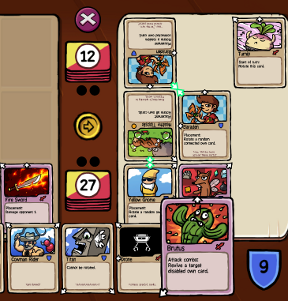 The core gameplay is naturally the card battling everyone is so entranced with, and it plays like a somewhat simplified Triple Triad. You and your opponent take turns placing cards on your boards, each trying to reduce the other's defense to zero. Cards are activated when you link three or more in a row by connecting the arrows on the edges together, and this triggers the dominant card attribute. (If you have multiple card types in equal amounts in your connection, you get to select the type you want to activate.) For example, linking at least two attack cards together would deal damage, while two or more defense cards would strengthen your defense value. For every card you play, you're dealt another from your deck, and while initially you start off with only a dew different types, as you play you'll unlock a lot more with special abilities. Some cards can revive a disabled one, for example, or count as two when you're linking them to another, or cards that will randomly spin at the start of each round.

When you're not battling, your time is spent exploring the city and talking to people. To what end? Why, more cards of course! There are booster packs to buy (with in-game currency... no in-app purchases whatsoever!), uncommon or rare cards to come across, and secrets to uncover, all of which amounts to, well... grinding. With 180 unique cards to collect, you might have to burn through a lot of battles or booster packs to find the specific cards you want, so it's a good thing battling seems to be all everyone ever wants to do. Deck management will wind up playing a big role as you progress, and with a minimum of twenty-five cards (up to forty total) to make a deck, and six decks to create total, customizing their setup can take a lot of your time. As a result, Card City Nights is a game best suited for players for whom the thrill of completion and careful strategy is their idea of a good time. This does mean that once you get a lot of cards, organizing decks can become tedious when the scrolling deck UI only displays twelve cards onscreen at a time. 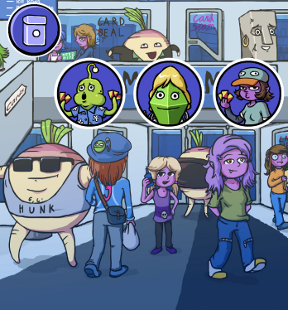 Though at first blush Card City Nights seems like a gentler version of more complex card games, once you start building your deck you'll realize that there's more to it than it seems. Once you start getting into cards that move or ones that require other specific cards to activate powerful combinations, however, or even powerful cards that apply a penalty for using them, you'll realize there's more going on under the hood than it seems. Things don't start to get particularly challenging until after you win your first legendary card, so take your time to learn the ropes. As most matches are best two-of-three or more, they can take a long time if you don't put some thought into deck-building to take foes down quickly.

Card City Nights is the sort of game that feels like a perfect fit for mobile devices because the strategic gameplay and jazzy presentation makes you want to sink back in a comfy chair with it for hours. Don't expect much of a story despite the touted adventure aspect, or for the characters and cards referenced to make much sense to you if you haven't played more of Ludosity's games. But you also shouldn't expect that to get in your way of enjoying it. It's just so unapologetically silly that it's effortlessly charming, and as a result, makes for a simple yet rock-solid addition to the genre that's well worth a play.

Linux:
Get the full version (Steam)