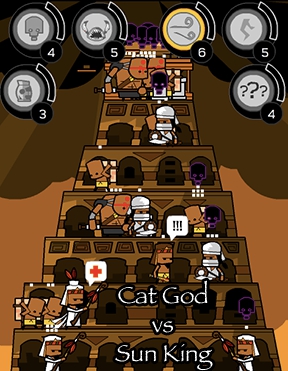 If the Sun King had ever read the story of the tower of Babel, he would know that trying to make yourself into a god never ends well. If he had ever gone on the internet, he would know that going up against a cat also will end poorly. Apparently, he failed to do both of these things, so it's up to you to take down his pretensions in Nerdook's crazy latest, Cat God vs. Sun King. It's an interesting volley into the defense genre: the enemy is sending waves to attempt to build a tower, and you're purely and simply trying to destroy them all. Plus you're a cute little cat. Who's a cutie wootie deity patootie? You are! You are!

You start out with just one ability, but each level will give you a new one, and you can also buy three more at the store using scarabs earned through achievements. However, you can only have a max of six abilities at any one time. In level, you can click to select an ability or use hotkeys [1] through [6] to quickly switch. Click to fire an ability. Some abilities automatically act in a certain way, for example, floor spikes attack only the bottom level. Other levels are aimed, such as a lightning bolt which attacks along a vertical line or a sheep curse which transforms a few enemies directly around the cursor. Abilities cost mana and also take reloading time. The more you use abilities, the cheaper, quicker and more powerful they will get, up to a max of three levels per skill. Once you kill every enemy, you win the level.

Once you've beaten all twelve initial levels, you unlock an endless mode where you start with a large amount of mana but the enemies keep coming. That mode ends when the tower is built.

At first glance, twelve levels may seem a bit short, but what Nerdook did was cut out grind almost entirely. You get new skills very quickly, progress in leveling skills counts even in failed levels, and you get new enemies every level as well. Sure, he could have padded it out by having four or five levels per new aspect, but as is, you never get bored. He ends the game just at the point where adding anything further would just make the enemies a swarming, confusing mess and force the player to simply spam attacks rather than using any kind of strategy. So the game feels very tight and focused. And adorable. Even the Sun King himself looks like he just needs a cuddle. Let's hug it out, Cat God and Sun King!

Is anyone else having the problem of not getting any scarabs after beating some missions? I currently have 2 scarabs, spent 1, and am on level 6. Where did they go?

Scracth that. Didn't read the full review and didn't realize the scarabs were tied to acheivements. Wow. And sorry for triple post.

If we could condense these long-winded reviews down, removing the wannabe cute-speak and hip-speak, and just get to the facts of the game, then how much nicer this site would be. Okay, so it's a tower defense game done in nerdook's unique style- that knowledge was helpful; thanks. And nothing person, joye- the problem is a site-wide epidemic, I know.

[You want a link blog? I can certainly give you that, and it would be a whole lot cheaper for me, too. But I don't believe that's what the majority of our visitors want who come here, after all we are a review site. Anyways, sounds like this page is what you're looking for: https://jayisgames.com/all-games -Jay]

A warning to any obsessive completionists out there: one of the items can only be purchased if you're playing the game on Kongregate.

Actually, I don't see the "tower defense" part in this game at all. I mean... where are the towers? Sure, you are trying to prevent monsters from getting to a place, but really, some sports or racing games could fit into that too. The game itself is probably closer to something like Pillage the Village than anything.

That said, the game itself is a nice little timewaster with a definite "nerdook" kind of charm to it. Quite easy overall, esp. after you get to lvl 3 for some of the spells, but still has some strategy behind it. However, like many of nerdook's games, the balance is somewhat off. You will not really use more than 6 spells (and you can make do with 3 really) even if you weren't limited. You'll find the locust swarm spell in particular to be very very strong and later on, the confusion and worm spell can make the game a breeze.

[I think it's more of a reverse tower defense, but I agree, the tower defense description doesn't fit well. I've modified the review. -Jay]

On topic the locust are not locked to floors, I use them between floors because they get a lot of people that way especially at max level.

Off topic what do I do if I see a really "no-good" ad?

[Please report inappropriate ads to our contact email address. Include, if you can, please, a screenshot of it and the right-click copy link URL location pasted into the email. Thanks! -Jay]

THAT THIS GAME IS CRAZY COPY FUN!???

I suppose it would be helpful to try and list what some of the powers do. I will list some of the basic powers, and what they do when upgraded. (I won't give a complete list, and won't list all of the upgrades/levels.)

Fireball: Sends down a weak ball of fire from the sky at the place you click. Level 1: Reduces mana cost down by one point (bringing it to a cost of 2 mana). Level 2: (And I think this is for everything on it's level 2) doubles the speed for it to recharge. Level 3: Sends 2 smaller fireballs adjacent to the spot that you clicked.

Sandworm: Summons a worm (with matching blood stained teeth, from the ground at which you clicked to attack enemies for decent damage. Level 1: Reduces the spell by 1 point, bringing it to a cost of 5. Level 3: Summons a worm twice the size of the normal one, hitting more enemies, dealing more damage, and reaching enemies a floor higher too! Overall I like this one at the maximum level.

Skeleton: Summons 2 Skeletons with 2 bars of health to thin out the croud of workers and overall keep things managable. Level 1: Reduces cost by 1 bringing it to a cost of 3. Level 3: Summons 3 skeletons, each with 3 health instead of 2.

Spirit Blade: Summons blades from the sides of the screen, meeting at the place you clicked. Level 1 reduces the cost of mana, by 3, bringing it down to 7! (I won't tell you what level 3 does, because as I write this, I don't even know yet. Sorry!)

Hope this helps those at the start. Also, I'm curious as to what lightning level 3, and Spirit Jar level 3 change. I can't seem to notice.

You level up your skills simply by using them, whether effective or not. So for the long cooldown ones, you can replay level 1 and then spam Soul Jar, Wind doodad, etc for quite a while to level it up pretty fast.

Each acheievement tells you what you need to do, so its pretty straightforward. For the falling one, let them build up a few floors, then use WIND to blow them off the side, and lightning them on the way down to get this achievement.

You only wanna summon skeletons once until they go away, as another summon removes the old ones. When they appear, they do so on the topmost level and insta-kill anything next to them. Then they patrol, but usually die pretty fast. (summon skeletons on an early level ONCE to get the achievement.)

I recommend buying the 20% more mana and Double starting mana ones very quickly.

Sandworm seems to be the most effective spell for a while, so use it heavily at the very beginning which will eat 5 or 6 baddies at a time (along with 1 use of skeletons to clean up any leftover). By the time you are out of mana, youve killed half the wave. Dont forget to drop Mana Jars on cooldown to keep your mana up.

Well dang, I made it to 16 minutes in survival. What finally got me was the false prophets, draining my energy into the negatives.
What I used to get to 16 minutes.

Earthquake level 3, skeleton level 3, desert wind level 3, soul jar level 3, locusts level 3, and spirit blade level 3. I was holding the 7th floor for quite a while, but I was able to hold out on the 2nd floor as well. On the 7th floor, when the sun god went up there, or a few brutes, I'd spam skeletons (because when you summon new ones, they can attack instantly, so basically, it was faster to summon new ones, then it was to wait for them to attack) Besides, they often died in 1 hit on tough enemies. I would use desert wind if the top floor was completely overwhelmed (as in, I summoned at least 4 sets of skeletons, and they are being killed instantly) which helped to buy some time. Soul Jar was incredibly helpful. Earthquake was to destroy the floor a bit.

So nobody on here has ever played Babel Rising on the iPhone, then?