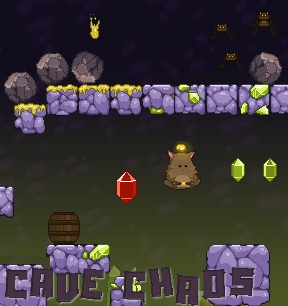 Ever been trapped in a cave, unable to move because bats kept removing everything from behind you and have yet to assemble the ground in front of you? Yeah, me too. This is exactly your situation in Cave Chaos, a new release from Nitrome. A "jump and run and avoid" kind of game (similar to Canabalt in some ways), your goal is to make it through each level of the cave without falling into the dark abyss below. Problem is, you're on the bats' schedule, here, and the ground only exists in the narrow window between when they build it and when they carry it away!

Use the [arrow] keys to move and jump, your only consistent actions throughout the game. As the bats drop off barrels, boxes, solid ground, boulders and other obstacles, simply maneuver yourself to the best possible position, nudging things to the side and charging your way forward. Well, charge in a cautious, conservative kind of way. Cave Chaos isn't necessarily a fast-paced game.

A few levels in you'll start to encounter enemies, many of which bug you in fantastic new ways! You'll also run into fun (read: not fun) new and inconveniently-timed obstacles, such as piles of rocks or a massive rolling boulder. Stupid bats. Fortunately, power-ups also appear (if you can grab them) that give you new abilities such as the double jump.

If you've got a few minutes to kill and can handle a few light tests on your reflexes, Cave Chaos is a great time waster!

Best Nitromer in a while.

Agreed with LittleLight. This is much fun...

I haven't played it yet but i noticed that another programmer has been added to the nitrome team: andrew gardner! :)

"Chaos" seems to be apt word here, since I have encountered a number of glitches where I fall through the floor even though the floor hadn't disappeared on me yet. Most of them seem to be centered on when I get a double jump power up. A few times were when I was getting the double jump powerups under barrels, and another was near a powerup when a rat got attached to my guy's head. I thought those rats just slowed you down, rather than making you fall through the floor. :x

Great Nitrome game indeed, all though it seemed a bit slow to me. Also, the path creating system is an interesting choice - doesn't let the player outrun escape the pitfall.

Fun game, but those springs were the death of me. It's because your jump is so slow - I waste so much time hopping onto the spring, it practically negates whatever help it was supposed to give me

bah, really not my cup of tea. Who thought a game where the purpose is to always run would actually have you fail if you run too fast ???

Well...the purpose [i]isn't[/i] to always run. If you want a game like that, "Dino Run" would be more appropriate. This is more a game about timing.

Honestly, I don't get the love for that game.
The only action is running from the collapse and not hitting enemies or the dead end. Not that this would be too easy, but imo it depends on luck too often.

That said, though it's monodirectional, the design is great with all the white creatures lurking around, but that's probably one of the reasons I for one like Nitrome's games :)

Level seventeen is killing me. :p

Great game, though. What's been happenin' to Nitrome lately? This is their first game in about a month.

yes, nitrome was slow getting this game finished, but cave chaos does have nice level design and not many bugs.

How do you do level 17 its impossible! Whenever I try to use double jump it won't let me and I die.

Y'know, I liked this game. Granted, it was particularly easy for Nitrome (though, yeah, I'll admit that level 17 took a toll on me and I probably spent a bit too long trying to get it just right), but I thought it had a great premise and overall design and I loved the little white monster-things.

Great game. Finished it in... Less time than I would generally finish a Nitrome game, which was nice. :)

Very good game when you completely finish it. The only hard level in my opinion was level 17. I love Nitrome and have beaten all of their games but 3 of them. I really hope for a sequel to one of their games SOON.

What does the box with the orange circle in it do? I have three circles orbiting me, but it doesn't seem to give me any special power...

Nerdyem: I think it's a shield.

I love this game! One of Nitrome's best.

the dynamite throwing ones.

I beat the game, it was easy. -.- They should make cave chaos 2 but make it more challenging.

Level 8 is killing me! After the

spider I can't reach the upper platform, and keep dying, falling down. Is there something I don't know with the wagon?

Mora: you'll have figured it out by now (power of posting) but anyway:

Keep the double jump. Nothing to do with the wagon.

Now that was a very good Nitrome game. While there was many times I got stuck and annoyed at it, thats common for nitrome, but normally the game is all but impossible to finish. I really enjoyed that it was fast paced. You could go through the game in a short time.
Level 17 was definitely the hardest, since after covering half of the level you need to time it just right. Needless to say it was fun but an agonizing level.

Awesome game!! But I can't get past the big boulder on level 10! Can someone leave me a tip?

Start by running through the first half. When you get to a jump-shroom that leads to a upper level with red gems, take it. Avoid the baddies that jump on your head. Go through the next part and you'll come across a block that has three opening - high, middle, and low. Take the low path. Use the jump-shroom and go over the 'mountain'. As you jump off the mountain, jump onto the platform holding the double jump boxes- get one. Wait at the bottom of the mountain. As you see the boulder, jump once, then press forward, and as you do so, jump again, and you should jump over it onto the mountain. Run over it, and at the next path, take the high path and get all the green gems. Keep running, and you'll find a last upper/lower path choice - go low and get all of the gems.

That's exactly how I did it.

YES!! Finally completed level 17. If anyone is stuck, tell me!

I'm stuck with the glitch at the end

Time waster... HIT that nail on the HEAD!