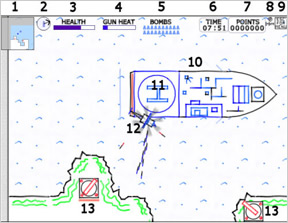 When a rogue Crimson marker sets out to destroy the peace of Whiteboards everywhere, Blue markers must stand and fight!

In Chop Raider, a strategy shooter created by Virgil Wall, pilot a helicopter to defend against the red army's tanks, planes and other heavy artillery that shoot the crap out of you. Bomb the war factories for the sake of all markers of every color!

Select your mission and then lift off from the Carrier home base. You have two weapons at your disposal, guns you shoot with your mouse and bombs you drop with your spacebar. The guns have unlimited ammo, but watch out that they don't get too hot by keeping an eye on the gun heat meter. If the "heat" gets too high on the guns you suddenly have a lot less fire power. Your supply of bombs on each run is limited, if you run out you must return to the Carrier and reload.

Evade attacks from tanks, turrets, boats, planes, missiles, and rack up points by shooting everything that's red. Destroy all the power plants and then war factories on each level to save all of markerkind.

Analysis: Variety of options and simplicity of design make this a fun little shooter game. There are brief training sessions, an arena section where you can select a simple objective for each arena, and there is the Campaign, the eight-level main mission where you can choose three degrees of skill difficulty.

The controls for the helicopter were a bit odd to get used to at first—the up arrow is to move forward in whatever direction you are headed, and it took a little practice to take off smoothly. But I liked the helicopter movement design of hover and drift—it feels quite robust for a stick figure.

There's something that takes off in the imagination when playing games like this that look like pen and paper—something has come to life that you're used to seeing static. So even though the graphics aren't fancy, the action is still satisfying.

I would be more comfortable with the chopper pointing in the direction of the mouse so i didnt have to turn to aim and flying would be more fluid...

other than that... it seems fun.

Anybody else recognize the antecedent here?

Raid on Bungeling Bay for the old C64. At least, I'm assuming.

Did anybody else have problems with the keyboard controls getting stuck?

Yeah, kind of fun as long as it works, but that's not very long.

That ending was... strange.
It got real serious all of a sudden.

i played this game a while ago and i love it, and i've played it quite a few times since.

It seems kinda fun, but really hard to aim and dodge, which seems especially necessary by about the fifth level. Also, since you pretty much have to hover over something to bomb it, the bombs are practically useless against anything but the actual buildings, so you have to slowly, slowly peel away the defenses first.

Just what I wanted... Desert strike in flash with pixel graphics...

Heheh. I was wondering if anyone else would remember the old Desert Strike and Jungle Strike games .. man, those were great! :D

I'd love this game if it were not for the horrendous grinding noise of the chopper flying.

How are you supposed to do the Valor mission where you have to rescue POWs? A) how do you land? B) how can you keep the defenses destroyed long enough to bomb the production buildings?

I really meant "how do you rescue POWs?" The briefing doesn't say and neither do the instructions.

I had a hard time getting the POWs for a while too. You have to

hover right over that little H inside a box, and then land. Then you have to wait until all the little blue dots get on board.

This would be fun if there weren't a 3 to 6 second delay in the command inputs.

Why won't the other missions unlock? I played through the tutorial and I've completed mission 1(contact) twice on normal difficulty, but mission 2 stays locked. I'm not sure what I'm doing wrong.

I also had issues with the keyboard getting stuck. Firing my gun seemed to help it.

You don't. You pick off enough so you don't get killed, then go on bombing runs. 5th level onward, you can't just hover over the building and bomb the crap out of it.

All in all, a fun little game. You can tell that a disturbingly large amount of time went into the backstory, which IMO takes this from being "annoying" to "fun".

Only thing I had a problem with was the top-left area map not having any indication of where the carrier was. Seriously, I must have spent 3 minutes on board 5 chasing that darn thing around the island.

Dude, the round thing with the arrow shows you the bearing of the ship from your position.

A very nice game otherwise, except it's nearly impossible to beat the later levels on time on a slower machine, especially on hard difficulty. The clock runs at normal speed, but when there are many enemies and bullets on the screen, the game itself slows down making it impossible to keep up with the clock.

I feel like every level is a suicide mission.

Great game, really like this one, the developer must've spent ages on this and it shows.

Some play tips for anyone else:

great game, although you quickly realize that it is easier just to get killed when you run out of bombs (hopefully spiraling to death on top of the target of interest) instead of going to refuel at the carrier.

The POW level was annoying, since you have to keep taking off to destroy the defences that the war factory is rapidly rebuilding (a little slower rebuild rate would be nice).

oh, and where is the level editor? This would be a killer game/community type of thing if people could draft up and submit their own story lines (a long the lines of ninja kiwi's BLOON games).

but how do you still rescue the pows from the camps?

the last level IS a suicide run- too close to his nuke when it goes BOOM! i wish it would give you about 10 seconds to get outta there-
the "little boy" bomb on hroshima took nearly a minute to reach burst altitide.
oh well...
still an AWSOME little game
Part one..Hmm... still no sequel... remove pt 1 text or add another