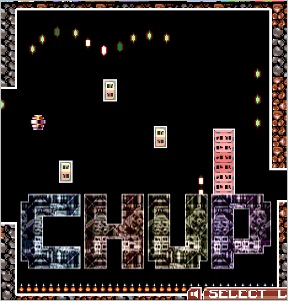 Sometimes at night, do you lie in bed, close your eyes tightly, and wish, wish, wish with your secret heart of hearts… that you were a metal barrel? One that was able to move and compact itself to leap great distances? Perhaps over pits of spikes to collect tokens? Shhh, shhh, it's okay. It's okay. We know exactly how you feel. And judging by Chup, the newest platformer of barrel-leapin', coin-grabbin' action, Tomas Pettersson does, too.

Chup is played primarily using the [arrow] keys or [WASD], which you can use to move your barrel around the screen, despite a lack of legs or feet. (I like to imagine there's a tiny skateboard there, which makes it more extreme.) Press [Left] or [Right] to move, and [Up] to preform a small jump. But for big distances, click and hold the left mouse button, which makes your barrel crouch down in a state of cat-like readiness. You can then move your cursor around the screen, and a path of red dots will show you the length and arc of your leap, which can help you plan some really tricky landings. When you release the button, the barrel will vault magnificently in the direction its path indicated, like a particularly clunky gazelle.

Your goal is to reach the little glowing platform in every level, but that's not all there is to do. Scattered throughout each level are scores of glowing coins, and collecting all of these will increase your ranking and raise your score. Sometimes it's as simple as an extra hop in the air on your way to the exit, but often coins are in places that force you to go out of your way to get them. But don't take too long, since you're also awarded bonuses based on how quickly you finish. And how many "launches" (jumps with the mouse button) you take.

At only sixteen levels, Chup is more of a snack than a meal. It also looks and sounds like something you should be plunking quarters in at the arcade, sandwiched in between Ms. Pacman and Contra. 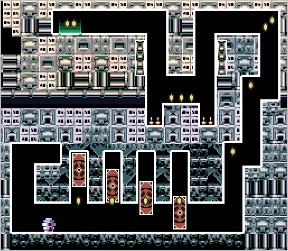 Analysis: Chup is an incredibly fiddly game, and if you're a timid platformer like myself, you'll miss out on a lot of those speed trophies. I spent a lot of time in later levels gingerly nudging my barrel closer and closer to the edge of platforms. In levels where the ceiling is low or you're trying to land on narrow moving platforms, it's important to judge your leaps carefully, so naturally I also spent a lot of time restarting every level over and over. And if you're about to tell me you blew through the entire game on your first try, my glare will be so intense as to burn a hole through the internet, so I hope you're willing to accept the responsibility for the charred remains of all those LOLcats.

And, in a way, that makes Chup a nearly-perfect platformer. While later levels can be pretty punishing, it's not the sort of hateful difficulty that was prevalent in, say, Unfair Platformer. After all, games aren't fun if they're too easy, but they also cease to be enjoyable if you need precognitive abilities and the reflexes of a jackrabbit to complete them. While most of the levels will require a restart or two — or three, or four — it never became frustrating enough that I wanted to quit the game out of spite.

A bit of leniency might have been appreciated as far as all the deathtraps went, however. The barrel doesn't appear to be made out of paper mache, soap bubbles, children's dreams, or anything else that would account for all the rampant instakill. Being crushed? Okay, but I'm pretty sure a barrel should be able to survive a two-foot fall onto densely-packed orange spikes. The farther you play, the more the levels start to resemble some sort of diabolical demon's machine. If you were to tell me the designer went mad after completing them, I would not be surprised.

I'm still not entirely sure what a "Chup" is. Is it the sound a barrel makes when it leaps into the air? The type of coin you're collecting? Or is it the feeling you get from crossing the finish line? Only one way for you to find out.

Dora, much love dear. :)
You had me in stitches by the end of the review. xD

This game is chupping sweet :P

I laughed all the way through this review, too. Terrific job, Dora.

I also dig the game, and its perky, perky chiptunes.

I like to yell "What the chup?!?" when my tender little barrel is crushed. Which is a lot.

'salright...a bit too pixel-perfect on some of the moving platform jumps for me to finish it, though. got through most of it, but I can't stand having to constantly restart like that.

Chup OR My love affair with moving platforms

Level 11 was pretty bad as far as moving platforms, precise jumps, and punishingly placed spikes are concerned. It took me about 20 spiky deaths, but I beat it.
I got as far as level 12 before I called it quits. You don't have much air control once you launch, and I found that jumping to a moving platform from a moving platform too difficult.

I really like the retro feel of the art and menu.

I'm getting the chup beaten out of me on level 12, but maaaan this game is a hoot. The playstyle, the music...this is definitely a game for -true- gamers. To whomever said you have to have super-realistic 3D graphics and orchestra-calibre sound to have a good game, I present to you proof that you are dead wrong. :]

(On a side note: Next time I play Scrabble, "chup" is going on the board at LEAST once.)

Fun game, played through it all. There are a bunch of cheat codes at the end, but I dont want to spoil the game for anyone!

I liked it... it did not feel like it was stylized to look like an old game, it actually FELT LIKE an old game, and not someone mimicking them/